The Birmingham Six were a group of men sentenced to life imprisonment in 1975 in the UK for the Birmingham pub bombings, in which 21 people were killed and 182 injured. Their convictions were declared unsafe and overturned by the Court of Appeal on 14 March 1991. They were later awarded compensation ranging from £840,000 to £1.2 million.

On 1 June 2016, Birmingham's senior coroner, Louise Hunt, announced that the inquest into the deaths is to be reopened 42 years after it was adjourned.[1]

The Birmingham pub bombings took place on 21 November 1974 and were attributed to the Provisional IRA.[2] The devices were placed in two central Birmingham pubs: the Mulberry Bush at the foot of the Rotunda building, and the Tavern in the Town, a basement pub on New Street. The resulting explosions, at 20:25 and 20:27, were together the worst terrorist attack in Britain until the December 1988 Lockerbie bombing; 21 people were killed (ten at the Mulberry Bush and eleven at the Tavern in the Town) and 162 people were injured. A third device, outside a bank on Hagley Road, failed to detonate.

Five of the six men arrested were Belfast-born Roman Catholics. John Walker was born in Derry. All six had lived in Birmingham since the 1960s. Five of the men, Hill, Hunter, McIlkenny, Power and Walker, had left the city on the early evening of 21 November from New Street Station, shortly before the explosions. They were travelling to Belfast to attend the funeral of James McDade, a PIRA member who had accidentally killed himself whilst allegedly planting a bomb in Coventry. Hill was also intending to see an aunt in Belfast who was sick and not expected to live. They were seen off from the station by Callaghan.

When they reached Heysham they and others were subject to a Special Branch stop and search. The men did not tell the police of the true purpose of their visit to Belfast, a fact that was later held against them. While the search was in progress the police were informed of the Birmingham bombings. The men agreed to be taken to Morecambe police station for forensic tests.

On the morning of 22 November, after the forensic tests and routine questioning, the men were transferred to the custody of West Midlands Serious Crime Squad police unit. William Power alleged that he was assaulted by members of Birmingham CID.[3] Callaghan was taken into custody on the evening of 22 November.

The trial began on 9 June 1975 in Lancaster Castle, before Mr Justice Bridge. After legal arguments, the statements made in November, since repudiated, were deemed admissible as evidence. Thomas Watt provided circumstantial evidence about John Walker's association with IRA members.[4]

Frank Skuse used positive Griess test results to claim that Hill and Power had handled explosives. Callaghan, Hunter, McIlkenny, and Walker all proved negative. Gas chromatography-mass spectrometry tests at a later date were negative for Power and contradicted the initial results for Hill. [5] Skuse's 99% certainty that Power and Hill had explosives traces on their hands was fundamentally opposed by defence expert Dr Hugh Kenneth Black a Fellow of the Royal Institute of Chemistry and ex-HM Chief Inspector of Explosives at the Home Office. Skuse's evidence was clearly preferred by the trial judge. [6] The jury found the six men guilty of murder and on 15 August 1975 they were sentenced to life terms.

Charges against police and prison officers

On 28 November, when the men appeared in court for the second time - having been remanded in custody at HM Prison Birmingham - all showed bruising and other signs of ill-treatment.[7] Fourteen prisoner officers were charged with assault in June 1975, but were all found not guilty at a trial presided over by Mr. Justice Swanwick. The Six pressed charges against the West Midlands police in 1977, which were rejected in the Court of Appeal on 17 January 1980 by the Master of the Rolls, Lord Denning, sitting with Lord Justice Goff and Sir George Baker under Issue Estoppel.[8] [9] In his judgment Lord Denning said:

Just consider the course of events if their (the Six's) action were to proceed to trial ... If the six men failed it would mean that much time and money and worry would have been expended by many people to no good purpose. If they won, it would mean that the police were guilty of perjury; that they were guilty of violence and threats; that the confessions were involuntary and improperly admitted in evidence; and that the convictions were erroneous. That would mean that the Home Secretary would have either to recommend that they be pardoned or to remit the case to the Court of Appeal. That was such an appalling vista that every sensible person would say, 'It cannot be right that these actions should go any further.' They should be struck out either on the ground that the men are stopped from challenging the decision of Mr. Justice Bridge, or alternatively that it is an abuse of the process of the court. Whichever it is, the actions should be stopped.[10] [11] [12] 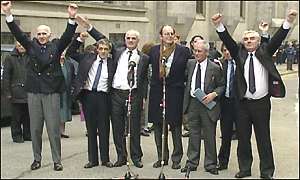 Outside the court after successful third appeal. MP Chris Mullin is centre (with scarf)

In March 1976 their first appeal was dismissed by Lord Chief Justice John Widgery. [13]

Journalist (later Government minister) Chris Mullin investigated the case for Granada Television's World in Action series. In 1985, the first of several World in Action programmes casting serious doubt on the men's convictions was broadcast. In 1986, Mullin's book, Error of Judgment - The Truth About the Birmingham Pub Bombings, set out a detailed case supporting the men's innocence including his claim to have met with some of those actually responsible for the bombings. Home Secretary Douglas Hurd MP referred the case back to the Court of Appeal.

In January 1988, after a six week hearing (at that time the longest criminal appeal hearing ever held), the men's convictions were upheld. The appeal judges, under the Lord Chief Justice Geoffrey Lane, in their summing up strongly supported the original conviction. Over the next three years newspaper articles, television documentaries and books brought forward new evidence to question the conviction while campaign groups calling for the men's release sprang up across the UK, Ireland, Europe and the USA.

Their third appeal, in 1991, was successful. Hunter was represented by Lord Gifford QC, others by noted human rights solicitor, Gareth Peirce. New evidence of police fabrication and suppression of evidence, the discrediting of both the confessions and the 1975 forensic evidence led to the Crown withdrawing most of its case against the men.

The Court of Appeal stated about the forensic evidence that: Dr. Skuse's conclusion was wrong, and demonstrably wrong, judged even by the state of forensic science in 1974.[14]

The collapse of the case and other miscarriages of justice caused the Home Secretary to set up a Royal Commission on Criminal Justice in 1991. The commission reported in 1993 and led to the Criminal Appeal Act of 1995 and the establishment of the Criminal Cases Review Commission in 1997.

Richard McIlkenny died in a Dublin hospital on 21 May 2006, following a lengthy battle with cancer.

On 28 March 1990, ITV broadcast the Granada Television documentary drama, Who Bombed Birmingham?, which re-enacted the bombings and subsequent key events in Chris Mullin's campaign. Written by Rob Ritchie and directed by Mike Beckham, it starred John Hurt as Mullin, Martin Shaw as World in Action producer Ian McBride, and Patrick Malahide as Michael Mansfield QC. It was repackaged for export as "The Investigation", and has appeared several times on Canadian television. The award winning ITV documentary "The Birmingham Six: Their Own Story" (tx. 18.03.1991) is available on a DVD produced by Granada Television.