Colgan Air Flight 3407, a scheduled passenger flight from Newark, New Jersey, to Buffalo, New York crashed due on February 12, 2009 killing all on board, including prominent 9-11 truther, Beverly Eckert.

The NTSB determined that the aircraft, a Bombardier Dash-8 Q400, entered an aerodynamic stall from which it did not recover and crashed into a house in Clarence Center, New York at 10:17 p.m. EST (03:17 UTC), killing all 49 passengers and crew on board, and one person inside the house where it crashed.[1] The black boxes were found.[2]

Mark Gorton suggests was Colgan Air Flight 3407 was targeted because Beverly Eckert was aboard. He argues that it was "most likely... one in a long line of plane crashes used to kill high profile threats to the criminal syndicate at the heart of the national security state."[3]

As well as Beverly Eckert, also aboard the flight was Alison Des Forges, an expert on the Rwandan genocide.[4]

Neither the controller nor the pilot showed concern that anything was out of the ordinary as the airplane was asked to fly at 2,300 feet. A recording of communication between the doomed plane and the Buffalo, N.Y. airport suggests the pilot was calm just moments before the commuter plane crashed into a house, killing everyone on board and one in the Clarence, N.Y. home.[2] 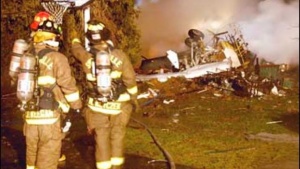 +
Has image2
File:Colgan_Air_Flight_3407.jpg +
Has location
New York +  and USA +
Has noRatings
0 +
Has objectClass
Event +
Has objectClass2
Event +
Has perpetrator
Colgan Air Flight 3407/Perpetrators +
Has revisionSize
2,854 +
Has revisionUser
Robin +
Has wikipediaPage
https://en.wikipedia.org/wiki/Colgan Air Flight 3407 +
Has wikipediaPage2
https://en.wikipedia.org/wiki/Colgan_Air_Flight_3407 +
Is not stub
true +
Start
February 12, 2009 +