Beverly Eckert was the widow of a victim of the 9/11 attacks who became a famous member of ther 9-11 Truth movement, campaigning for a sincere investigation of the events of that day. Stating "My silence cannot be bought"[1], she refused to accept the 9-11/Compensation fund. In 2009, 6 days after meeting Barack Obama to demand a real investigation, she was killed aboard Colgan Air Flight 3407.

Beverly Eckert's husband was killed by the 9/11 attacks. Rather than $1.8 million for the death of her husband from the 9-11/Compensation fund, she instead pursued justice in the US legal system. In a moving editorial she wrote “I say to Congress, big business, and everyone who conspired to divert attention from government and private sector failures: My husband’s life was priceless, and I will not let his death be meaningless. My silence cannot be bought.”[1] 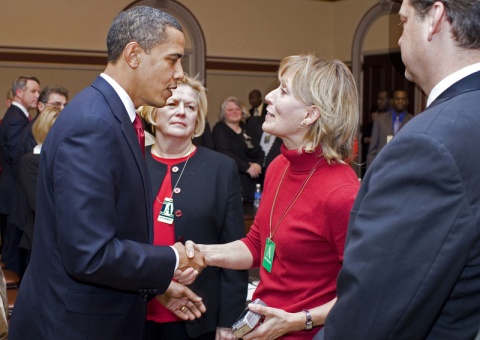 Beverly Eckert was killed by the crash aboard Colgan Air Flight 3407, six days after meeting Barack Obama to demand another investigation into 9/11. Mark Gorton suggests was "most likely... one in a long line of plane crashes used to kill high profile threats to the criminal syndicate at the heart of the national security state."[1] Various Internet commentators have remarked that her death was suspicious.[3]

A Quote by Beverly Eckert