In 2009 the dogma of the "too big to fail" financial institutions was widely promulgated by the commercially-controlled media, as top executives were rewarded at taxpayers' expense for their losing speculations. This increased the size of the those financial institutions in proportion to their leverage over national governments. Smaller institutions, the productive sector of the economy and ordinary citizens fond themselves under increasing financial pressure as the windfall profits given to the largest banks decreased the effective value of their assets.

In 2008 the US government passed the Troubled Asset Relief Program. In 2009, this was repeatedly amended. In other countries, the largest financial institutions carried out similar thinly veiled thefts from the public purse. In UK, the Bank of England carried out "Quantitative easing". These measures were taken in spite of over 99% of the calls from the public being against them.[citation needed]

In 2009, the Guardian published an article by Charlie Skelton entitled Our man at Bilderberg: in pursuit of the world's most powerful cabal in which he wrote that "a handful of people are saying, this weekend is Bilderberg".[1] This was the beginning of the end for Bilderberg's secrecy since this was to be the first of annual articles for the Guardian, and other UK commercially-controlled media outlets sent reporters to 2010 Bilderberg.

A 2009 victim on Wikispooks 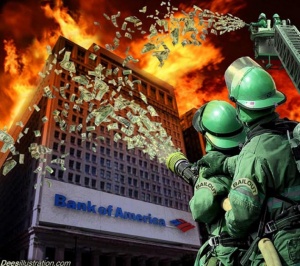