The Dallas occupy plot was an unused plan to use snipers to assassinate the leaders of Occupy Houston. It was chanced upon by Ryan Shapiro, whose FOIA requests uncovered documents that reveal that the FBI were aware of this plot, possibly complicit in it, and did nothing to stop it. A second FBI document emerged from Jacksonville. The commercially-controlled media avoided the topic both in and outside of USA.[1]

When, in early October 2011, the Occupy movement came to Houston, Texas, police violently assaulted Occupy activists and carried out federal and local surveillance of people seen as organizers. The police infiltrated occupy with agents provocateurs and attempted to entrap Occupy activists.[2] 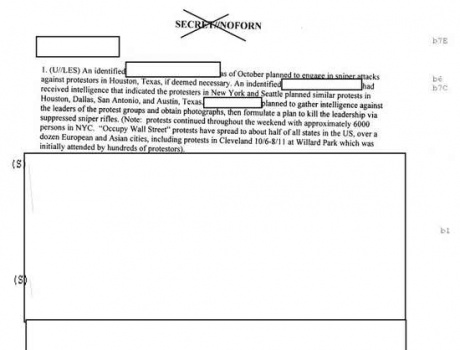 In 2011, Jason Leopold filed a public information request with the FBI and Department of Homeland Security, seeking all records pertaining to Occupy Wall Street.[3] MIT student, Ryan Shapiro, detected a reference to the returned documents to the Dallas occupy plot in 2012. In 2013, he made his own FOIA request for all documents "relating or referring to Occupy Houston, any other Occupy Wall Street-related protests in Houston, Texas, and law enforcement responses."[4] This revealed the following redacted document from the Houston FBI:

An identified [DELETED] as of October planned to engage in sniper attacks against protestors in Houston, Texas, if deemed necessary. An identified [DELETED] had received intelligence that indicated the protesters in New York and Seattle planned similar protests in Houston, Dallas, San Antonio and Austin, Texas. [DELETED] planned to gather intelligence against the leaders of the protest groups and obtain photographs, then formulate a plan to kill the leadership via suppressed sniper rifles. (Note: protests continued throughout the weekend with approximately 6000 persons in NYC. "Occupy Wall Street" protests have spread to about half of all states in the US, over a dozen European and Asian cities, including protests in Cleveland (10/6-8/11) at Willard Park which was initially attended by hundreds of protesters.)[5] 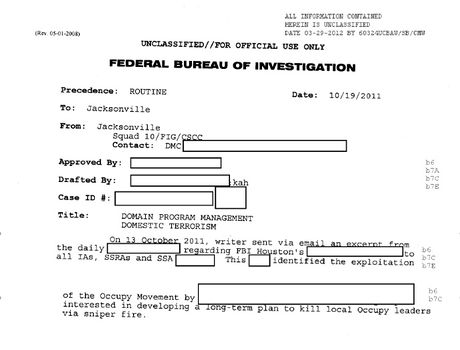 A section of another internal FBI memo which mentioned an assassination plot, from Jacksonville, including the text "interested in developing a long-term plan to kill local Occupy leaders via sniper fire."[6]

The Houston FBI office stonewalled requests from WhoWhatWhy for information about the sniper-rifle assassination plot and why nobody was ever arrested for planning to kill demonstrators.[7]

On March 12, 2014, U.S. District Court Judge Rosemary M. Collyer issued her order in the case, along with an accompanying memo, saying that the FBI needed to explain why the agency cited “law enforcement exemption” as its reason for denying Shapiro access to the other 12 pages. In her ruling, Collyer wrote: “(Shapiro) argues that FBI has not established that it actually conducted an investigation into criminal acts, specified the particular individual or incident that was the object of its investigation, adequately described the documents it is withholding under Exemption 7, or sufficiently connected the withheld documents to a specific statute that permits FBI to collect information and investigate crimes. Mr. Shapiro further alleges that FBI has failed to state a rational basis for its investigation or connection to the withheld documents, which he describes as overly-generalized and not particular. On the latter point, the Court agrees.”[8]

Collyer gave the FBI until April 9, 2014 to either provide a more satisfactory explanation or hand over the information Shapiro requested. The FBI was allowed to file its response under seal.[8]

Occupy Houston activists have speculated that the wording “if deemed necessary” might indicate that the unidentified plotter was an organization, such as the police or a private security group. Who What Why observed wryly noted Dallas police has a track record of using sniper rifles (referring to the JFK assassination).[7]

Although the story is backed by official FBI documents, it has not proved of much interest to the commercially-controlled media, leading Project Censored to promote up the story. Truthdig carried a story on Jun 29, 2013 entitled Redacted FBI Documents Show Plot to Kill Occupy Leaders If ‘Deemed Necessary’.[12] An 18 March 2014 entry in the Wall St Journal law blog in 2014 FBI Ordered to Justify Shielding of Records Sought About Alleged ‘Occupy’ Sniper Plot. On March 21, 2014, Maxwell Barna wrote a piece The FBI Is Hiding Details About An Alleged Occupy Houston Assassination Plot for Vice.com.[13]

Almost nothing has been published on this topic online since a February 2015 story entitled Occupy Houston assassination plot records won't be released.[14]

26 October 2016 Robin  A revealing glitch in the matrix
For anyone in doubt of the arbitrary nature of the "justice" served out - or not served out - by the FBI, the plot to use snipers to assassinate the leaders of the Dallas occupy movement is revealing. The FBI were aware of (and possibly involved in) this, but corporate media was as uninterested as the US "Justice" Department.