A typically satirical but no less depressing commentary on the plight of Jeremy Corbyn in his electoral efforts. It illustrates the extent of Jewish influence over the entire UK political spectrum and how aspiring politicians of both Left and Right must genuflect before it if they are to have any prospect of electoral success. The arrogant Chutzpah of the BOD's Gillian Arkush and Jonathan Gerron is well illustrated by the list of questions that they Require Corbyn to answer ..."If he is not to be regarded from the day of his election as an enemy of Britain’s Jewish community".

High on their list of indicators of enmity towards the Jewish people is remembrance of the massacre of the inhabitants of Deir Yassin by Jewish Irgun and Stern Gang terrorists, led by Israeli prime minister to be, Menachem Begin, on 9 April 1948.

Corbyn and the Jews

This week the Jewish Chronicle (JC) reports that Jeremy Corbyn, our revolutionary Labour Leader, has finally met with the UK ultra Zionist BOD (Board Of Deputies Of British Jews).

After the meeting BOD’s president Jonathan Arkush told the JC,

"we had a positive and constructive meeting and were pleased that Mr. Corbyn gave a very solid commitment to the right of Israel to live within secure and recognised boundaries as part of a two state solution to the Israel-Palestine conflict.”

Good to know that Corbyn, a long time supporter of the Palestinian Solidarity Campaign (PSC), is so committed to the existence of the Jewish State.

Arkush announceed that Corbyn supports Jewish blood ritual such as brit milah and Jewish sadistic butchery known as shechitah. According to the JC. "Mr Corbyn affirmed his support for shechitah, brit milah and Jewish faith schools.” It is perhaps another sign of progress that the new radicals can tolerate some inhuman measures.

Two weeks ago some pro Palestinian students opposed the appearance of Israeli war criminal Ami Ayalon in London’s King’s College, British Jews were very upset by that development. According to the JC, our proletarian leader didn’t like it either.

"He (Corbyn) rejected any sort of violence or intimidation such as occurred at King’s College London last month.”

However, The UK Jewish Lobby is still not satisfied with Corbyn's capitulation, they clearly want more. Arkush added

"despite being pressed, he (Corbyn) should do more to address profound and real concerns about past meetings with people or organisations with extremist or antisemitic views.”

”We are also looking for the Labour leadership to show with more clarity that it will maintain its longstanding opposition of boycotts against Israel.”

I felt sorry for Mr. Corbyn, I thought that the man whom so many of us admire might feel humiliated with his back pushed against the wall. I was totally wrong, Mr Corbyn seems cheerful. He told the JC that he was:

"looking forward to continuing that dialogue…I am a lifelong campaigner against racism and fascism in all forms, and I made it clear that I am utterly opposed to antisemitism in any form, including denial of the Holocaust, from any part of the political spectrum.”

This is a bit puzzling; was Corbyn referring to the Jewish Holocaust or the Palestinian one?

Here is what the patron of the Palestinian Solidarity Campaign told the JC about the Israeli/Palestinian conflict:

“I have a long interest in campaigning for peace and justice in the Middle East, and reiterated my commitment to a two-state solution to the Israel-Palestine conflict. Israelis and Palestinians both have the right to a state, and to live in peace and security.”

British Jews compriseless than 0.5% of the entire British population. According to different polls, the vast majority of them oppose Corbyn and his politics. On the face of it, Corbyn’s political future is not dependent on the Jewish vote. What is it then that pushes Corbyn to pander to the BOD? One possible answer is that Corbyn is a really nice person. He wants everybody to be happy and this includes British Jews. He goes out of his way to please them by telling them what they want to hear. Another possible answer is slightly upsetting: due to his radical views and criticism of Israel, Corbyn’s political survival is dependent on the support of Labour’s far left and British Trotskyites. And here we have a practical answer. Labour’s far left and Trotskyites themselves comprise a little Israel - a ghetto dominated by Bundist archaic Judeo-centic tribal ideology. So it is Corbyn’s past criticism of the Jewish State that now holds him hostage to the Jewish far left.

The JC article mentions that in September BOD president Arkush called on Mr. Corbyn to “publicly reject Hamas and Hezbollah if he was to gain the trust of British Jews.” This is actually good news, it leaves Corbyn with some room to manoeuvre. He has plenty more to give away. In other words, we will see more of Corbyn’s groveling and humiliation in the near future. 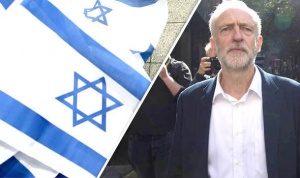