Benjamin "Bibi" Netanyahu is an Israeli deep politician who became the Prime Minister of Israel again on 31 March 2009.[1][2]

On 12 September 2002, Netanyahu testified under oath (as a private citizen) before the U.S. House of Representatives' "Committee on Oversight and Government Reform" about the nuclear threat posed by the Iraqi régime.[3]

Six months later the United States, Britain and the coalition of the willing launched the Iraq War on the (false) premise that Iraq possessed weapons of mass destruction (WMDs) and that Saddam Hussein's government posed an imminent threat to the United States and its coalition allies.[4]

Binyamin Netanyahu joined the Israel Defence Forces shortly after the Six-Day War in 1967 and became a team leader in the Sayeret Matkal special forces unit. He took part in many missions, including Operation Inferno (1968), Operation Gift (1968) and Operation Isotope (1972), during which he was shot in the shoulder. He fought on the front lines in the War of Attrition and the Yom Kippur War in 1973, taking part in special forces raids along the Suez Canal, and then leading a commando assault deep into Syrian territory.[5][6] He achieved the rank of captain before being discharged.

After graduating from MIT, he was recruited as an economic consultant for the Boston Consulting Group. He returned to Israel in 1978 to found the Yonatan Netanyahu Anti-Terror Institute, named after his brother Yonatan, who died leading the July 1976 Operation Entebbe. In 1979 this groupconvened the Jerusalem Conference on International Terrorism, which established the direction of the deep state "war on terror" project. In the 1980s this project was to framed the discourse about "terrorism" and "counter-terrorism" to try to legitimize actions taken by the Israel government against Palestinians.[7] Binyamin Netanyahu was the Israeli Ambassador to the United Nations from 1984 to 1988.

Netanyahu became the leader of the Likud party in 1993 and won the 1996 elections, becoming Israel's youngest ever Prime Minister, serving his first term from June 1996 to July 1999. He moved from the political arena to the private sector after being defeated in the 1999 election for prime minister by Ehud Barak. Netanyahu returned to politics in 2002 as Foreign Affairs Minister (2002–03) and Finance Minister (2003–05) in Ariel Sharon's governments, but he departed the government over disagreements regarding the Gaza disengagement plan. As Minister of Finance, Netanyahu engaged in a major reform of the Israeli economy, which was credited by commentators as having significantly improved Israel's subsequent economic performance.[8] He retook the Likud leadership in December 2005, after Sharon left to form a new party, Kadima. In December 2006, Netanyahu became the official Leader of the Opposition in the Knesset and Chairman of Likud. Following the 2009 parliamentary election, in which Likud placed second and right-wing parties won a majority,[9] Netanyahu formed a coalition government.[10][11] After the victory in the 2013 elections, he became the second person to be elected to the position of Prime Minister for a third term, after Israel's founder David Ben-Gurion. In March 2015, Netanyahu was elected to his fourth term as prime minister.[12][13][14] 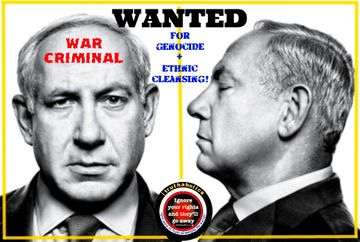 Following its launch in August 2015, a petition to the UK Government and Parliament was signed by over 100,000 people calling for Benjamin Netanyahu to be arrested for war crimes when he holds talks in London this September: "Under international law Netanyahu should be arrested for war crimes upon arrival in the UK for the massacre of over 2000 civilians in 2014."[15] None of the commercially-controlled media covered the story.

Once the petition reached 10,000 signers, the UK Government was obliged to respond, saying:

"Under UK and international law, certain holders of high-ranking office in a State, including Heads of State, Heads of Government and Ministers for Foreign Affairs are entitled to immunity, which includes inviolability and complete immunity from criminal jurisdiction."[16]

On 5 September 2015, The Times of Israel reported:

A petition on the British Parliament’s website urging the UK to arrest Netanyahu for “war crimes” has received more than 100,000 signatures, making the matter eligible for debate by lawmakers. The campaign reached its target on Saturday morning. Netanyahu will visit London this coming week for talks with British counterpart David Cameron. The two prime ministers are expected to discuss regional issues, with an emphasis on the Iran nuclear deal reached between world powers and Tehran on July 14. British officials told Channel 2 that Cameron plans to discuss the situation in the Gaza Strip, stalled Israeli-Palestinian peace talks, and the Syrian civil war.[17]

The Petitions Committee met on 8 September 2015 and reported:

"Because the Government said in its response that the request made by the petition was something that it was not able to do under UK and international law, the Committee agreed that it would not take any further action on the petition. It is still open to MPs who want a debate on this issue to find other opportunities, such as an application to the Backbench Business Committee."

On 9 September 2015, hundreds of protesters blocked the road outside 10 Downing Street as David Cameron met his "close friend" Benjamin Netanyahu. They included many Jews showing solidarity with the Palestinian people, and who also objected to Netanyahu's belief that Israel represents all of world Jewry.[18]

Welcoming the election of Donald Trump as the 45th President of the United States, Netanyahu said in a statement:

“President-elect Trump is a true friend of the state of Israel. We will work together to advance the security, stability and peace in our region. The strong connection between the United States and Israel is based on shared values, shared interests and a shared destiny."[19]

In January 2017, Netanyahu was interrogated at his home by Israeli police for three hours regarding alleged corruption.[20] In February 2018 Israeli police recommended indicting him for bribery.[21]

A Quote by Benjamin Netanyahu