Document:More than 500 jihadists cared for at the Ziv Medical Centre 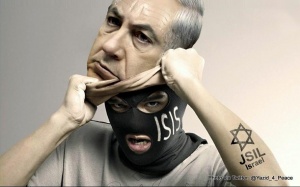 Translated from French by Peter Kimberley

Wikispooks Comment Israel consistently claims pre-eminent status among state victims off terrorists. This article adds to the vast body of evidence that it is in fact one of its main sponsors. The hypocricy - though par for the Israeli course - is breathtaking. 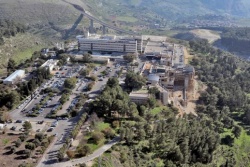 Several journalists who were participating in a media tour organised by the Australia/Israel and Jewish Affairs Council (AIJAC) were able to visit the Ziv Medical Centre, in Zefat (North Israël). The hospital has at its disposal a service specialising in war traumatology. It is government-run and linked to the Israeli Defence Forces. In this context, it treats Syrian "refugees". 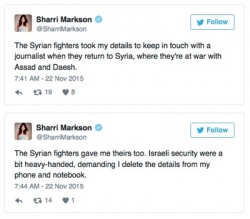 Sharri Markson Tweets from ZIV MC, for which she was arrested

While the rest of the group - the assistant chief editor of the Daily Telegraph, Ben English ; the journalist from Seven News, Alex Hart ; the political reporter from Sky News, David Lipson ; the chief editor of the Australian Financial Review, Aaron Patrick ; the head of the political column of the Sydney Morning Herald and The Age, Bevan Shields – followed the organisers, a famous journalist from News Corp, Sharri Markson, stayed with some of the patients in order to hear their stories. She was thus able to confirm that more than 500 of them are members of Al-Qaeda, wounded during the fighting in Syria. She was able to note the details of the manner in which they had been transfered to Israel to receive hospital care, and then sent back to continue the jihad in Syria. She was then arrested by security officers.

In September 2014, Prime Minister Benjamin Netanyahu created a photo-op in this hospital when he came to visit and praise the Al-Qaeda jihadists.

The jihadists had kidnapped the UNO observers from the Philippines and Fiji charged with keeping an eye on the cease-fire line in occupied Golan. During negotiations for their release, the United Nations paid a ransom to Al-Qaïda which was then transferred to a bank account without provoking any international inquiry in order to identify the beneficiary. Finally, the Blue Helmets retreated, so that today, the Israeli and Syrian armies are separated not by the UNO, but by Al-Qaeda.