Document:My offer to Owen Jones: A tour of Nazareth 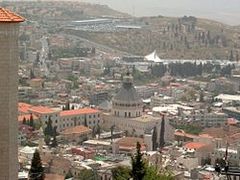 Nazareth: "the Arab capital of Israel"

In an interview with the Jewish Chronicle at the weekend, Owen Jones announced that he would soon be making his first trip to Israel to see friends and would take the opportunity to visit the occupied Palestinian territories. Let us hope Jones makes every effort during his stay to get the full story of what has happened and is happening to the Palestinian people.

That will mean doing more than just visiting the occupied territories – and then hearing his liberal Zionist friends decry what goes on there as the fault of the Israeli right wing. They will assure him that, when (sic) the Israeli Labour party returns to power, all the horrors he has seen will come to an end. They will tell him, not that he has witnessed just a few symptoms of problems inherent in Zionism, but that the occupation is the extent of the problem and it should be blamed on Benjamin Netanyahu and the settlers.

That is a deception – one liberal Zionists have been using to keep British Labour activists like Jones docile for decades. He has a duty to dig much deeper. That will upset his friends, but he must ignore their protests if he really cares about justice for the Palestinians and about getting to the truth.

After all, it was Labour Zionists – those who are today represented in the UK by the Jewish Labour Movement (to which he gave a memorial lecture last night) – who set up the original settlements in the occupied territories after 1967 and established the blueprint for creeping annexation and ethnic cleansing there. The model of permanent occupation was created not by Netanyahu, but by Generals Moshe Dayan and Yigal Allon of the Israeli Labour party, the same party that continues to maintain its close ties to Britain’s Labour party.

If Jones doubts that Labour Zionism caused the problems that have led many people today to regard Israel as pariah state, he can ask Israeli historian Ilan Pappe for an early copy of his forthcoming book "The Biggest Prison on Earth".

Pappe, of course, set out very clearly in his earlier "The Ethnic Cleansing of Palestine" how Labour leaders like David Ben Gurion planned from the outset to expel the Palestinians to create a Jewish state. In the new book, Pappe explains the connections between those events and today’s occupation.

After the mass expulsion of Palestinians in 1948, the Israeli Labour leadership created and refined an oppressive two-decade military regime for the fragments of the Palestinian people who managed to remain inside the new Jewish state’s borders. Finally in 1952, Israel – very reluctantly and under international pressure – made these Palestinians nominal citizens.

It was during this military government over its own (Palestinian) citizens that Israeli Labour party leaders began formulating how they would expand their rule into the occupied territories and seize all of historic Palestine. When they engineered a chance to conquer the territories in 1967, the military government inside Israel was simply exported wholesale into the West Bank and Gaza.

If Jones really wants to understand what has been taking place since the beginnings of Zionism, not just the start of the occupation, he must visit a Palestinian community inside Israel. The very best place to do that is Nazareth, the only Palestinian city to survive 1948 as a Palestinian city. The city’s exemption was an accident – the commander sent to expel Nazareth’s population disobeyed orders, fearful of the international repercussions. That mistake forced Israel to create the neighbouring Jewish city of Upper Nazareth, the flagship of Ben Gurion’s Judaisation of the Galilee campaign. The relations between these two cities starkly illustrate what Zionism always sought to achieve.

The occupation is simply one facet of a much wider Zionist process of Judaisation, a facet that Israel can excuse by claiming security concerns. Inside Israel, the true goals of Zionism cannot be so easily obscured.

If Jones believes Israel is a Jewish and democratic state, as he appears to, he needs to see how Israeli “democracy” plays out for the one in five Israelis who are Palestinian.

Here are a few key questions he needs to answer on his trip. What does citizenship mean for 1.7 million Palestinians when the state defines itself as Jewish? Can a state be Jewish and democratic, any more than it can be Islamic and democratic or white and democratic? Why do hundreds of communities in Israel specifically bar Palestinian citizens from living in them? How comfortable would he feel if hundreds of British communities banned black Britons from residing in them? Why is the state education system in Israel strictly segregated using ethnic criteria, whatever the views of parents? Why has the state de-recognised dozens of Palestinian communities that pre-date Israel’s creation, making their inhabitants criminals in the eyes of the state?

Jones can see the evidence to answer those questions only inside Israel, and only in a Palestinian community like Nazareth.

Here is my offer. I will spend a day with him making a tour of Nazareth, as well as Upper Nazareth and the destroyed village of Saffuriya, which has been reinvented as an exclusive Jewish farming community called Tzipori. I will show him the evidence so he can assess it for himself. I will also arrange meetings with local people on any issue that interests him.

Here are two videos that may help as primers for such a tour:

I will absolutely respect his privacy. I will say nothing about what happens that day. Whatever our past disagreements, my interest is only that he gets the chance to see with his own eyes the story the media, including his own newspaper, The Guardian, have shown no interest in covering.

The Palestinian story of dispossession no more began in 1967 than the Jewish story of persecution began with the Holocaust. If Jones really wants to understand why peace is so elusive, he needs to look at the roots of the problem. He will not find those roots in Ramallah, or Nablus, or Hebron. He will find them in Nazareth, Upper Nazareth and Saffuriya.

So, Owen, please take my offer seriously. You can reach me through the contact page on my website. All our dealings from that point on will be confidential.

UPDATE: Several people have suggested that a trip to Hebron could prove more educational. I don’t want to get into a pointless debate about which forms of Israeli oppression are more significant. But the Hebron suggestion indicates some people have missed my point.

Here it is in short form: It is quite possible to visit Hebron, witness the horrors there and still emerge with one’s fervent Zionism untouched, or even reinforced. Lots of liberal Israelis are appalled by Hebron. In fact, it is one’s response to Hebron that defines whether one is a liberal Zionist rather than some other kind of Zionist. The settlers of Hebron are fanatical Jewish supremacists driven by a religious agenda. They are backed by a far-right government. When liberal Zionists see what happens in Hebron, they are reminded only that the settlers are awful people, and that liberal Zionists need to be in charge again.

It’s the “again” that needs to be inspected. One has to look at what Zionism did when the Labour party was directing it – in Israel’s formative stages and for most of its history. Only then can you understand that what you see in Hebron or Nablus was created in Haifa and Nazareth first. The template was set in Israel, at a time and place where there were no security issues. It was not Palestinian bombs Israel feared from its Palestinian citizens but their wombs.

Jones saw the awful attack on Gaza in 2014. He spoke out vehemently against it. Seeing Hebron – and I am sure he will go – won’t shift his understanding of what is going on here one iota. Seeing Nazareth, just might.