JLM views Zionism as the national liberation movement of the Jewish people and aims to promote "a secure, progressive, just and successful State of Israel". It campaigns against racism generally (especially the British National Party) and supports a viable peace plan to resolve the Israeli–Palestinian conflict by upholding the rights of the Palestinian people to live at peace with their neighbours on the basis of a two-state solution.[1]

In February 2016, when Louise Ellman MP retired as Chair of the JLM, Hertsmere Labour activist Jeremy Newmark was elected as her successor. Newmark is a former CEO of the UK's Jewish Leadership Council and a previous spokesperson for former Chief Rabbi, Jonathan Sacks. Sarah Sackman, who stood as Labour's candidate in Finchley and Golders Green in the 2015 General Election and Mike Katz, who was a Labour Party candidate for the Greater London Authority in the 2016 London Assembly, were elected as vice-Chairs of JLM.

In February 2018, Mike Katz was appointed chair of the JLM upon Jeremy Newmark's resignation.[2]

Ken Livingstone at the NCC

Some weeks ago we submitted an impact statement in advance of Ken Livingstone's hearing at Labour's National Constitution Committee (NCC). This statement reflected the views across our membership base and that of the wider Jewish community. Yesterday I was called to give evidence by the lawyers acting for Labour's National Executive Committee, and was also cross-examined by Michael Mansfield QC who is representing Mr Livingstone. I emphasised the deep pain and hurt that Mr Livingstone caused to our community and Holocaust survivors, and incredibly broad communal consensus on this matter. As we await the NCC finding it is important to be clear that this is not a trial of history. The only job the NCC has is to decide whether Mr Livingstone has brought the Labour Party into disrepute. It is clear to us at JLM that the answer to that question is a resounding yes, he has.

We've done a number of media interviews including BBC radio and TV, ITV and Channel 4. JLM vice-Chair Mike Katz represented us brilliantly on BBC Daily Politics which can be watched here. The Guardian have covered Mr Livingstone's hearing extensively, and comment from us can be seen here and here. Finally, you can catch on the BBC clips here.

We will keep you informed of developments with the hearing via our social media channels (make sure you follow us on twitter); and will make every effort to react in real time, which may be challenging given the possibility of the decision becoming public just as Shabbat begins.

Regardless of the decision on Mr Livingstone, zero tolerance means zero tolerance, and JLM will continue to stand firm and fight all forms of racism wherever they are found.[3] 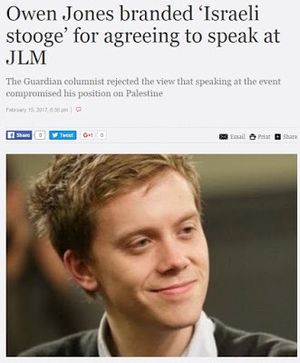 JLM has Owen Jones "in a bear hug"

Henry Smith served most recently as vice-Chairman of the Jewish Labour Movement, and held several positions in Poale Zion, notably for several years as Chair. He was widely respected and admired both by Labour politicians in the UK over several decades and amongst Labour's sister party, the Israel Labor Party. Having started his communal career in Young Poale Zion, he was very active within the Zionist Federation, ensuring a multiplicity of Zionist voices are represented. JLM are proud to honour his memory.

We are delighted that the lecture will be given by Guardian columnist, Labour movement activist and friend of the Smith family, Owen Jones; in conversation with JLM Vice-Chair Sarah Sackman.

Owen Jones will be covering a number of issues including left antisemitism, the Middle East and the Labour Party.[4]

"I criticised Jones then over his cowardly and irresponsible behaviour. Now he needs to explain how the principles that drove him away from the Stop the War rally can allow him to support a group, the Jewish Labour Movement, that is so clearly and maliciously attempting to subvert the elected leader of the Labour party. Owen Jones has responded to this blog post both on Twitter, calling it “tedious nonsense” in his usual, dismissive style, and with a post here that tries to deflect attention from my argument with a straw man: that a conspiracy theory is painting him as a stooge of the Israeli government. No conspiracy is being posited here – only very, very poor judgment. I have also not accused him of working on behalf of the Israeli government. Only of assisting, presumably thoughtlessly, those who are working on behalf of the Israeli government inside the Jewish Labour Movement, including most definitely its current director, Ella Rose. Sadly, though predictably, he has avoided addressing the point of my criticism.

"It is great that he wants to pay his respects to a friend’s late father, and I am sure there are responsible ways he can do that. But one of them is certainly not by adding his name and credibility to an organisation that was recently exposed by an undercover investigation to have been acting as a front for Israeli government efforts to subvert the elected leadership of Jeremy Corbyn."[5]