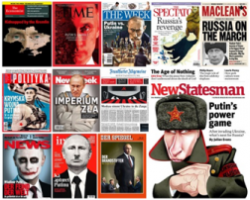 Christoph Germann is an independent analyst and researcher based in Germany, where he is currently studying political science. His work focuses on the New Great Game in Central Asia and the Caucasus region. You can visit his website here

A perceptive analysis of the growing disconnect between the general population of Germany and its Establishment. The article focuses on the unfolding 2013-14 events in Ukraine and shows that the mass of the German people simply do not accept the narrative of Russia as an aggressive, expansionist threat.

Edward Bernays once famously promoted the “conscious and intelligent manipulation of the organized habits and opinions of the masses” through the use of propaganda, which he considered an “important element in democratic society”.[1] Today’s so-called “liberal democracies” are testament to Bernays’ assertion. The “father of public relations” demonstrated early on that propaganda can be used for many different purposes, from selling cars to selling wars. Especially the latter has become the primary task of media in the United States and other NATO countries in recent years. With Iraq still burning, Western media played a decisive role in turning Libya and Syria into failed states as well. The propaganda was never particularly sophisticated. After “Saddam has weapons of mass destruction” came “Gaddafi is killing his own people” and eventually “Assad is like Hitler”. But mainstream media reporting got even worse during the Ukraine crisis and this could have unforeseen consequences for those in power.

In Ukraine bloodthirsty neo-Nazis became peaceful protesters, pro-Russian protesters became FSB agents and black became white. Anti-Russian propaganda is all-pervasive and the Western media narrative about events in Ukraine is more often than not diametrically opposed to the facts on the ground. NATO has been doing its best to provoke a new Cold War and the Obama administration, apparently believing its own spin, wants to pursue “an updated version of the Cold War strategy of containment” towards Russia. [2] This begs the question of what this is all about. Why is Washington determined to take on Russia?

As Pepe Escobar recently pointed out, the proposal of Russian President Vladimir Putin to German business and industry in late 2010 is the key to understanding the new Cold War.[3] In November 2010, Putin presented his vision of an economic community from Lisbon to Vladivostok in an editorial contribution to the German daily Süddeutsche Zeitung, in which he made the case for closer cooperation between the European Union and Russia culminating in “a unified continental market with a capacity worth trillions of euros”. Although the Russian President stressed that his proposal was not aimed at diminishing ties between the EU and its “traditional partners”, [4] Putin’s plan did not go down well with Washington. The United States has always tried to sabotage this kind of cooperation on the continent in favor of strong transatlantic ties in order to preserve its primacy in Eurasia. Up until now, this has worked to some extent but especially Russia’s dominant role in the European energy sector continues to be a thorn in Washington’s side. This issue became again the focus of attention during the Ukraine crisis. When U.S. President Barack Obama met with EU leaders in Brussels a few weeks ago to promote the Transatlantic Trade and Investment Partnership (TTIP), he seized the opportunity to call once more for reducing Europe’s dependence on Russian gas. [5] But American efforts to impede trade and cooperation between the EU and the Russian Federation stand and fall with one European country, which has a very complex relationship with Russia: Germany.

Russian President Putin addressed German business and industry in November 2010 for a reason. The two countries have close economic ties, not only in the energy sector. About 6000 German companies operate in Russia with investments totaling 20 billion euros. [6] Therefore, representatives of the German economy were quick to oppose any serious sanctions against Russia. [7] This stance is supported by the overwhelming majority of Germans.[8] Nevertheless, even 25 years after the fall of the Berlin Wall, Germany is not a sovereign country and Washington’s fifth column wields massive influence, especially over German politics and media. [9] This has created an interesting situation, where an immense amount of propaganda is used to justify the actions of the Merkel-led government and its NATO allies in Ukraine and the new Cold War against Russia.

When the current CEO of Siemens AG, Joe Kaeser, followed through on a long-planned trip to Moscow in late March to discuss Siemens’ business in Russia with President Putin, he faced harsh criticism from the German government and media. [10] After his return, Kaeser was interviewed by Claus Kleber, host of a well-known news program and one of the foremost NATO propagandists on German television. Kleber tried desperately to portray the Siemens CEO as a traitor to his country thereby making a complete fool of himself. [11] Shortly thereafter, German Finance Minister Wolfgang Schäuble did the same when he compared “Putin’s annexation of Crimea” with Hitler’s land grab of the Sudetenland. [12] Both the government in Berlin as well as the German media did their best to demonize President Putin and Russia in order to drive a wedge between Germans and Russians.

In case anybody had not gotten the message at this point, Polish American journalist Anne Applebaum spelled it out in Die Welt, the intellectual flagship of the Axel Springer SE: “Germans, you have to relearn deterrence” because “talking with Russia is not enough”. [13] The Axel Springer SE is a vital part of Washington’s fifth column in Germany and publishes similar anti-Russian propaganda on a daily basis. Applebaum is married to Polish Foreign Minister Radoslaw Sikorski, who was one of the signatories to the short-lived February 21 agreement. Both have worked at the neoconservative American Enterprise Institute and are among the strongest NATO advocates in Europe. Since Applebaum had already emphasized the importance of the information war in an earlier Telegraph article, in which she argued for a robust campaign “to counter Moscow’s lies”, [14] her inflammatory piece in Die Welt is not surprising at all. The anti-Russian propaganda campaign in Germany has now reached a point, where the well-respected Frankfurter Allgemeine Zeitung is publishing articles blaming Russia for the creation of al-Qaeda. [15]

Germans have put up with a lot of blatant lies and propaganda over the years but the reporting during the Ukraine crisis was the last straw. Never before in the history of the Federal Republic of Germany have such large segments of the population refused to buy the official narrative. The mainstream media has become the target of harsh criticism on a scale never seen before and this is very disturbing for the propagandists [author's emphasis]:

“In my 30 years of experience with debates, I have never seen anything like what is now happening in Germany in the dispute over Russia and Crimea. There have been issues that have deeply divided the nation, such as nuclear energy. And there have been those that have prompted millions to take to the streets over the years, such as the military buildup of NATO. Four years ago, there was even a discussion that saw – like now – a sharp confrontation between published and public opinions: the controversy surrounding Thilo Sarrazin’s comments on the impact of Muslim immigrants on German society. But in hindsight, measured against the current debate on Russia, the Sarrazin dustup seems easy to explain and understand.

Unless surveys are misleading, two-thirds of German citizens, voters and readers stand opposed to four-fifths of the political class – in other words, to the government, to the overwhelming majority of members of parliament and to most newspapers and broadcasters. But what does “stand” mean? Many are downright up in arms. And from what one can gauge from letters to the editor, the share of critics seems significantly higher now than what was triggered by Sarrazin’s inflammatory book back then.” [16]

Instead of addressing the valid criticism, editors and journalists blamed spreading anti-Americanism and conspiracy theories for the numerous critical letters and emails they have been receiving.

The German people vent their anger about the political class in various different ways. While some German citizens wrote a letter to Russian President Putin distancing themselves from anti-Russian sentiment in politics and media, [17] over 20.000 people signed a petition asking Russia Today to start broadcasting in German. [18] Furthermore, the famous Monday demonstrations, which came to prominence in East Germany in 1989, were revived in recent weeks and thousands have taken to the streets in several cities to call for peace. The people protest against the mainstream media, NATO aggression, the military industrial complex, the U.S. Federal Reserve, TTIP and many other things. [19] Predictably, Washington’s collaborators in Berlin are terrified and the media lost no time in discrediting the grassroots movement. According to German mainstream media, conspiracy theories, anti-Americanism, anti-Semitism and neo-Nazism are the driving forces behind the movement and therefore nobody should join the protests. So far, this transparent strategy has always worked for the German establishment but with the credibility of the mainstream media at an all-time low due to the catastrophic reporting during the Ukraine crisis, the ruling elite will sooner or later have to pay the price for all the lies and propaganda.