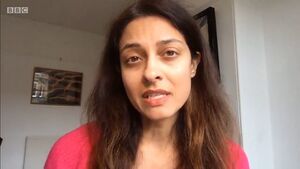 "Cybersecurity is not your worry with a virus"

Downing Street has appointed a senior spy to lead the UK’s Joint Biosecurity Centre, which will monitor the spread of coronavirus across the country and suppress new outbreaks.

Clare Gardiner, head of cyber resilience and strategy at the UK National Cyber Security Centre — a branch of signals intelligence agency GCHQ — will become the centre’s first director-general, responsible for advising ministers on the “alert level” for the virus; which is similar to assessing the terror threat.

Ms Gardiner’s role at the NCSC involves advising businesses and public organisations on how to improve their cyber defences, and she will return to this post after her secondment at the centre. But her research background in epidemiology and medical statistics make her well-suited to the role, according to one person familiar with her appointment.

She will report to Dido Harding, who is in charge of the NHS test and trace service.

The decision to put a security official in charge is likely to cause consternation among public health experts, who have questioned whether the template of a terror analysis centre is appropriate for managing a viral pandemic.[1] Tom Hurd, head of counter-terrorism at the Home Office, was seconded to help set up the centre last month, but is now back in his permanent role.

“Many of the countries which have done best in this area have just let the public health experts lead [on infection control],” said Devi Sridhar, chair of global public health at Edinburgh University. “The virus is not worried that you’re tracking its progress, it’s not going to change its tactic. Cybersecurity is not your worry with a virus. It’s a biological phenomenon.”

Azeem Majeed, who heads the department of primary care and public health at Imperial College London, also highlighted the potential for fragmentation if the centre’s remit was not carefully delineated. “In many ways the work of the JBC falls into the remit of Public Health England, which has the primary responsibility for infection control,” he said. “There is a danger of duplicating some of the work that PHE is supposed to be doing so there is scope for confusion about who exactly is in charge.”

The government’s rationale for bringing in cyber expertise is that the centre’s main function will be real-time data analysis, collecting information from across testing sites, schools and workplaces to intervene quickly and contain new spikes in infection. A small number of personnel from GCHQ’s headquarters in Cheltenham have already been seconded to help the centre develop its data analytics capabilities, a Whitehall official said.[2]

Mr Hurd had been an obvious candidate to set up the centre because of his record in marshalling information from across government departments, a security official explained. “It was one of the government’s few success stories in terms of pan-departmental working and sharing information,” the official said. “The key was understanding the high-level intelligence about the threat, but also involving police who had the local knowledge and knew what was happening on the ground.

“It’s the same with the virus — you need to understand the research, and what’s happening with the vaccine, you need data from across the country so you can find patterns, and then you need people who can interpret those patterns at a local level.”

Even though it is not fully operational, the centre’s role and function has already attracted controversy. Boris Johnson, the prime minister, said last month it would be responsible for setting the virus alert level, which is currently at four, the second highest. However, this week his spokesman suggested that the centre would no longer have the final say. “In terms of the setting of the alert level, it’s ultimately for the Chief Medical Officers, who are informed by the data which has been collected, collated and analysed by the JBC,” the spokesman said.

According to the alert spectrum published by government, at level one the disease is no longer present in the UK and level five is the most critical, indicating that the NHS is likely to be overwhelmed with patients.

Greg Fell, director of public health for Sheffield, raised concerns about the availability, validity and stress-testing of the various sources of data that will be submitted to the centre. The number of different bodies with a stake in the system, including the health department, NHS Digital and Public Health England, and the multiple different data sources involved, made “a complex mix”, Mr Fell said.

“There are lots and lots of different organisations and constituencies feeding stuff into the centre and expecting stuff from it and I bet it’s difficult and messy.”