GCHQ is an intelligence agency based in UK, where, according to their Twitter site, "our brightest people bring together intelligence and technology to keep Britain safe."[1]

GCHQ was originally established after World War 1 as the Government Code and Cypher School (GC&CS) and was known under that name until 1946. During World War 2 it was located at Bletchley Park.

“Among the core self-identified purposes of JTRIG are two tactics:


(1) to inject all sorts of false material onto the internet in order to destroy the reputation of its targets; and


(2) to use social sciences and other techniques to manipulate online discourse and activism to generate outcomes it considers desirable.”
Glenn Greenwald (24 February 2014)  [2]

The Joint Threat Research Intelligence Group (JTRIG) is a subgroup of GCHQ. Citing documents released though the Snowden affair, Glenn Greenwald termed the group "extremist", he cited documents showing their planning of deceitful strategies to "discredit a target".[3]

"GCHQ’s 360 degree full spectrum bulk collection data system was constructed in brazen and arrogant defiance of Article 8 of the European Convention of Human Rights. Britain’s parliament never debated or approved this massive construction programme as it would for any national infrastructure project. Every phone call, no matter the device is recorded, every image, website visited, personal details such as medical and financial records, contacts, everything private to you is no longer private."[4]

In May 2014, Privacy International and seven communications providers filed a complaint with the UK Investigatory Powers Tribunal, asserting that GCHQ's hacking activities were proscribed under the UK Computer Misuse Act. Rather than face this legal challenge. In apparent response, on June 6 2014, the UK government introduced the new legislation via the Serious Crime Bill to allow GCHQ, intelligence officers, and the police to hack without criminal liability. It consulted the Ministry of Justice, the Crown Prosecution Service, the Scotland Office, the Northern Ireland Office, GCHQ, the UK police and National Crime Agency, but did not inform Privacy International until after May 3, 2015 when the new law entered into force.[5]

A 2017 legal verdict by Justice Floyd, Justice Sales and Justice Flaux for GCHQ against privacy international decreed the Investigatory Powers Tribunal cannot be held subject to a judicial review under active laws unless the Secretary of State personally intervenes.[6]

In 2014, the Guardian reported that documents provided by NSA whistleblower Edward Snowden about project Optic Nerve showed that GCHQ recorded millions of images from Yahoo webchats. To avoid overloading their computers while recording streams of so many users simultaneously, they recorded one image every five minutes from the users' feeds.[7]

In 2014, revelations from Edward Snowden revealed how GCHQ acquired taps on internet lines. Whenever GCHQ wanted to tap a new fiber optic cable, they called engineers from BT (codename:REMEDY) to plan where to physically connect to the taps to the cable, and agree how much BT should be paid. GCHQ has Internet data feeds from "more than 18 submarine cables coming into different parts of Britain either direct to GCHQ in Cheltenham or to its remote processing station at Bude in Cornwall"[8].

GCHQ routinely shares information with other signatories of the UKUSA agreement, Australia, Canada, New Zealand and USA. This agreement assists all member countries in circumventing laws about spying on their own citizens.

GCHQ intervened to prevent the sixth installment of the Harry Potter book series being leaked on the internet.[9]

Jock Kane, a GCHQ employee for over 25 years with experience in many areas of the organisation[10] uncovered a range of corruption and bad practice, including poor security, and blew the whistle. A senior civil servant from the Home Office, James Waddell compiled a government report about his claims. Although finished in April 1979, this was never published. Margaret Thatcher alleged to Parliament that Kane's allegations were "unfounded"; as a consequence Waddell hinted to a journalist that his report had not concluded that Kane's allegations were without foundation.[10]

A June 1980 episode of the investigative television show, World In Action, titled Mr Kane's Campaign, was dedicated to Kane's revelations and campaign for stricter security at GCHQ in Hong Kong.[11] The programme was modified after having been restricted from being broadcast by the Independent Broadcasting Authority.[11]

Kane wrote a memoir in 1984, GCHQ: The Negative Asset, which was confiscated by Special Branch, and remains unpublished.[12] Undaunted, he wrote a second memoir, The Hidden Depths of Treachery, which was also subsequently halted by an injunction served on the publishers, Transworld Publications, Ltd.[10][13]

GCHQ internal material leaked by Edward Snowden lists investigative journalists as a threat, alongside "terrorists" and hackers, for reasons that have not been explained.[14]

Robin Ramsey, editor of Lobster Magazine opined in an editorial: "GCHQ works for the Americans. They must do because the British state no longer has the power to use the information GCHQ gathers."[15] 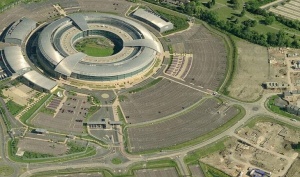 +
Has image2
File:GCHQ-benhall-2006.jpg +
Has leader
Foreign Secretary +  and Director of GCHQ +
Has logo