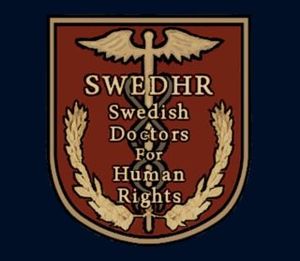 President Trump is now threatening to take America into a war against Syria, Iran and even Russia, a war he says is justified by “evidence” he has received from the Syrian White Helmets. We will prove beyond any doubt that this is a “Deep State” organisation, a melding of CIA, Al Qaeda and Britain’s intelligence services. We now have “slam dunk” proof that Trump and the “fake news” MSM are and always have been in lockstep, playing us all.

Actor George Clooney knew that the organisation Swedish Doctors for Human Rights had cited the “White Helmets” as child killers when he produced the Oscar-winning propaganda video that may well have led to this latest outrage. The organisation, SWEDHR is very real, their work authoritative and their indictment of the White Helmets for killing children in order to stage propaganda videos would have been known to Clooney and Netflix. They went ahead anyway. Why?

Moreover, Google itself is involved, at war with this group and others, censoring them from their search engines. The information here will be new to Americans.

Please note that at no time has the White House or any western media acknowledged the controversy regarding the White Helmets, which we allege is part of Al Qaeda’s propaganda operations. Nor is any mention of the dozens of proven gas attacks by the Free Syrian Army, ISIS and Al Nusra which are suddenly “forgotten” as though by magic.

The White Helmets, supposedly an independent NGO, receives up to $100m from the CIA and UK Foreign Office, “dark project” funding. Murdering children is their stock and trade as we will prove. Sharing headquarters with Turkish Intelligence in Gaziantep, Turkey this organisation is far more “death squad” than civil defence.

Swedish Doctors for Human Rights (swedhr.org) analysed videos, the rescue after an alleged attack by Syrian government forces. The doctors found that the videos were counterfeit, where even Arabic stage directions were overheard, and that the alleged “Rescue” in actuality is a murder. On first analysis, it looked as though the doctors working on the child assumed he was already dead.

However, after broader investigation, our team ascertained that the boy was unconscious from an overdose of opiates. The video shows the child receiving injections in his chest, perhaps in the area of the heart and was eventually killed while a clearly fake adrenaline injection was administered.

This was a murder.

The doctors determined in its analysis:

• The video should be life-saving measures after a chemical attack with chlorine gas - now claimed to be Sarin (not possible), including injection of adrenaline via syringe with a long needle into the heart of an infant. In no way were treatments correctly given for any potential chemical agent.

• The handling and treatment of the child was done in a manner that was careless, dangerous and likely to cause serious harm.

• Most telling is the fake repeated shots of adrenalin, supposedly into the heart. The medical personnel, and I think we can safely call them actors at this point, failed to push the plunger on the needle. Thus, the contents of the syringe were never injected as is clearly visible in the video itself.

• The visible diagnosis by a team of actual medical experts, based on what is observed in the video, indicates that the child was suffering from an injection of opiates and was likely dying of an overdose. There is no evidence of any other agent, chemical or otherwise.

• None of the children in the videos showed any sign of being a victim of a chemical attack. From an earlier video by the White Helmets:

• It was clear that the faked injection with the long needle administered through the stitches murdered the child in the video. This was a purposeful killing staged to appear as medical treatment.

• Behind the fake translation of the videos, the actual Arabic included stage directions for positioning the child for the video, not for medical treatment.

The Chairman of SWEDHR, Professor Marcello Ferrada de Noli, published at the beginning of March 2017 a first article with an analysis of the case: “Swedish Doctors for Human Rights: White Helmets video, macabre manipulation of dead children and staged chemical weapons attack to justify a 'No-fly Zone' in Syria.”

The collective findings of the Swedish doctors with regard to the propaganda and fakery by Al Qaeda in Syria (Al Nusra) are in line with the findings of leading German and International Scientists for Syria War.

Ferrada de Noli is the founder and chairman of Swedish Doctors for Human Rights (SWEDHR), a non governmental research organisation integrated by a group of professors and doctors operating in health-related areas, aimed to the research and report of effects of war atrocities in civil populations, torture of prisoners and human rights transgressions.

The organisation implements its endeavour in the following areas: country-scenarios where civil populations have been targeted by war crimes, transgressions on the part of governments on the human rights of individuals exposing war crimes, individual cases of doctors subjected to human rights violations, and research on the effects of torture in prisoners.

Swedish Professors & Doctors For Human Rights (SWEDHR) is an independent, non-profit, non-partisan, non-governmental organisation engaged in the research and reporting on the effects of war-crimes, torture and human-rights transgressions on civilian populations or on individuals.

Additionally, we oppose governmental assaults on the human rights of individuals who have denounced war crimes or exposed serious infringements to the civil liberties of the population. Unlike other established Swedish human-rights organisations, Swedish Doctors For Human Rights is not sponsored neither fully nor partially financed by Swedish governmental institutions.

SWEDHR is a team formed with the participation of a number of Swedish professors, PhDs, medical doctors and university researchers in the medical sciences and health-related disciplines. This participation is purely voluntary and made on a private basis.

SWEDHR statements represent solely the members of this organisation, not all Swedish doctors or any other institution or professional/academic association that the participants in SWEDHR are associated with. SWEDHR follows both the United Nations doctrine on Human Rights and ethical norms according to the World Medical Association’s Ethical Declaration of Helsinki. Read on our organisation’s aims and rationale for its foundation at SWEDHR’s Manifest.

At difference with other organisations of this type in Sweden, SWEDHR:

a) does not administrate funds of any kind;
b) neither holds nor request economic sponsoring from any governmental, corporative or private institution;
c) does not collect fees (meddlemsavgift) from its supporters;
d) does not campaign on economic-related issues associated with our HR endeavours.

We also believe that abstaining from the aforementioned possibility of external contributions is one way of maintaining absolute independence and credibility regarding unbiased reporting of HR issues.

SWEDHR is open for the altruistic participation of any interested doctor sharing the aforementioned research interests. Membership forms (full member or associate member) are described in our Bylaws. For questions, comments, or if you wish to contribute in our publications online, contact: info@swedhr.org. Please review the included videos: