Google's core product has always been its search engine, and its influence is such that it has been termed "the world’s biggest censor".[1] As of June 2020, it had 91.75% of market share of search engines. The most effective search engine for some purposes, it has a subtle censorship policy, so Wikispooks editors are not recommended to rely upon it - a variety of different search engines is undoubtedly a more effective way of accessing a range of material.

Google was started by Pd.D. students Larry Page and Sergey Brin and received seed-funding from both the NSA and CIA. Nafeez Ahmed has published an insightful piece on the origins of Google[2].

The Register noted in 2016 that "Aside from the fact it is persistently one of the biggest lobbyists in DC, there has also been: the last-minute change made to net neutrality rules solely because of a letter received from Google; the unusual dropping of anti-trust investigations into the search giant; the curious "non prosecution agreement" it reached with the FBI over drug ads; and the fact that a review of logs showed that Google execs meet with White House officials on average once a week..[3]

"Google's artificial intelligence technologies are being used by the US military for one of its drone projects."[4]

Watchdog.org reports that "More than 250 people have moved from Google and related firms to the federal government or vice versa since President Barack Obama took office."[5] 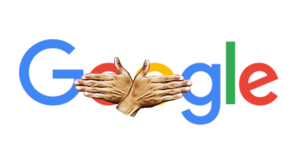 Google has been censoring content since at least 2010.[6] The extent of its censorship is harder to assess than with other types of website. In 2017 modifications to its algorithms resulted in reduced traffic to "left-wing, progressive and anti-war websites, which cut the search traffic of 13 leading news outlets by 55 percent since April". The World Socialist Web Site reported an 85% drop in search referrals over that period.[7] Project Veritas published information from Zach Vorhies in 2019 that showed considerable manipulation and political bias.[8] In 2020, it removed a lot of sites, reportedly due to a "technical issue".[9]

The Register reports that Google has an "introspective – some would say, cult-like – corporate culture".[10]

In October 2018, "more than 20,000 Google employees walked out of their offices to protest at how several executives had been secretly paid off following allegations of sexual harassment."[10]

On May 31, 2016, Google agreed with Facebook, Microsoft and Twitter to a European Union code of conduct obligating them to review "[the] majority of valid notifications for removal of illegal hate speech" posted on their services within 24 hours.[11]

Ben Gomes, Google's vice president for engineering, announced in April 2017 that Google’s search engine would block access to “offensive” sites, while working to surface more “authoritative content.” A 2017 march to protest Google's decision to reduce traffic to sites critical of the government's official narrative was cancelled after threats of violence.[12]

"It’s quite obvious [Google] want to be Skynet (of ‘The Terminator’). They have their own military robots, and have stated that they desire to create a profile on every human.”[13] 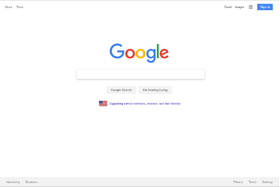 "Google engaging in more troop worship - trying to keep those recruitment numbers up by propagating the lie that military members are heroes who serve their country."[14]

Google sometimes adorns its homepage with an icon or phrase in honour of a special event or anniversary. Various groups have criticised it for its selections (or sometimes non-selections).

Google trends is a website that allows users to search on recorded data of who searched for what when. It has been very helpful why trying to establish the vintage of particular words and phrases.

Google has repeatedly denied manual intervention in any particular search results, arguing that it only works at the level of modifying algorithms.[15]

Although the most popular search engine, Google is certainly not the only one. This site currently lists 16 search engines, including some which are open source, such as SearX and Gigablast.

Searx is an open source metasearch engine. The successor to Seeks, and has been operating since 2014. Users are allowed to specify their own rules about ordering search results. This provides an effective way to break out of the search bubbles associated with search engines such as Google that profile users.

Gigablast is an open source search engine that went beta in 2002 and as of 2019 was still under active development.