Donald J. Trump is a billionaire businessman who was sworn in as US President on 20 January 2017. Elected on a promise to "drain the swamp" and "end the wars", he had his own connections to deep state actors and did everything he could to increase the military-industrial complex. This did not stop a virtually united deep state from waging a long, intense psychological operation, Russiagate against him, and possibly utilizing Covid-19 to rig the 2020 Presidential Election[citation needed] .

“Trump is the face of our collective idiocy. He is what lies behind the mask of our professed civility and rationality, a sputtering, narcissistic, bloodthirsty megalomaniac.”
Chris Hedges (June 2017)  [1]

All big entrepreneurs have the stink of unpopularity around them. Whether it is through envy or sincere distaste, Donald Trump, James Goldsmith, Rupert Murdoch, Robert Maxwell and Richard Branson have all become popular figures of hate.[2]

Deep State or Not?

Trump has some friends in the seedier parts of thedeep state environment, most notably Roy Cohn, known for his decades-long sexual blackmail activities[3] Donald is my best friend,” Cohn said in 1983, shortly after he had thrown a 37th-birthday party for Trump.[4]. He also knew sexual blackmailer for Mossad Jeffrey Epstein. Trump told New York Magazine for a 2002 profile of Epstein "I’ve known Jeff for fifteen years. Terrific guy. He’s a lot of fun to be with. It is even said that he likes beautiful women as much as I do, and many of them are on the younger side".[5]

On the other hand, Trump is not a member of the Council of Foreign Relations and other establishment networks, and has never attended a Bilderberg Conference, all de rigeur to vet top politicians. Also, the majority of the transatlantic establishment was strongly against him from the very start, which gave the impetus to several psychological operations to unseat him.

To ensure a Trump loss in 2020, the deep state elements of the Democratic Party game played an advanced regime change operation.

Some of the scenarios envisages Trump being escorted out of the White House on January 20, 2021, by the Secret Service, while continuing to "launch attacks against the legitimacy of the election".

On 23 March 2016, in an interview with Piers Morgan on ITV’s Good Morning Britain, Donald Trump said he had “great respect for Muslims” and had “many friends that are Muslims”. But when asked what the Muslim community should do to prevent radicalism, Trump replied:

Speaking in the aftermath of the Brussels atrocities, Trump said:

“I knew Brussels years ago, I was there probably three or four times and it was so beautiful, so secure and so safe. And now it’s an armed camp - I’m talking about before this new bombing. It’s a different world, a different place. There’s no assimilation. What’s going on there and what’s going on in other cities like Paris and others is a disgrace - an absolute disgrace - that we allow it to happen.”

Trump criticised how the recently arrested Paris bomber, Salah Abdeslam, was “coddled and taken care of by people that live in the neighbourhood”, and claimed “a lot of people in the community” knew the California attacks were being planned. He went on:

“I have great respect for Muslims. I have many friends that are Muslims. I’m just saying that there is something with radicalised portion that is very bad and very dangerous.”

Trump signalled that efforts to destroy ISIS were not enough. He told the ex-Daily Mirror editor:

Trump had previously claimed that parts of London were so radicalised that police were afraid to go on the streets, comments dismissed by the Met Police and David Cameron's government.[6]

On May 19, 2020, in a letter to World Health Organization Director-General Tedros Adhanom Ghebreyesus, Trump wrote:

In response Bill Gates turned to the EU for his fund raising campaign.[8]

On 21 March 2016, Donald Trump addressed some 18,000 supporters of the American Israel Public Affairs Committee (AIPAC), an influential pro-Israel lobby group, and outlined his most detailed thoughts yet on the prospects for Middle East peace, on curbing Iran’s nuclear ambitions and on defeating the violent extremists of the Islamic State.

Trump’s AIPAC speech, which unusually for him he read from a prepared text, was a mixture of pandering, implausible bluster and contradictory promises. The billionaire denounced the United Nations as an anti-Israeli opponent of democracy. “We will totally dismantle Iran’s global terrorist network, which is big and powerful—but not powerful like us,” he promised, without further explanation. He said he would “dismantle the disastrous deal” struck by President Barack Obama to curb Iran’s nuclear ambitions, then seemed to say that he would enforce it, or perhaps the sanctions regime that preceded it, “like you haven’t seen the terms of a contract enforced.”

In his speech to AIPAC, Trump worked hard to cast himself as sternly pro-Israeli. He variously cited his role as Grand Marshal of the 2004 “Salute to Israel” Parade in New York City and his daughter Ivanka’s conversion to Judaism after marriage. Months after angering a gathering of Jewish Republicans by fudging his views on the status of Jerusalem, Trump bowed to conservative pressure and pledged to AIPAC that he would move the American embassy to that divided city, calling it “the eternal capital of the Jewish people”.

Most straightforwardly, Trump brought his constant campaign-trail refrain about being a savvy businessman and deal-maker to AIPAC, offering America as a broker between Israel and the Palestinians. “Deals are made when parties come to the table and negotiate. Each side must give up something it values in exchange for something it requires,” he told delegates.

In the poisonously divided politics of 2016 Washington, even suggesting that Israel might have to give anything up in the name of peace involves challenging conservative shibboleths. In recent years, Republicans have aligned themselves with the views of Binyamin Netanyahu, the Israeli prime minister, in suggesting that Israel should not be prodded to engage in talks, because the Palestinian side has shown no sincerity or seriousness as a potential partner for peace.[9]

Jump forward a few months to November 2016 and Israel’s headlines were screaming "Netanyahu hails Donald Trump as a ‘true friend’ of Israel".[10] Israel’s far-Right, in the form of Education Minister Naftali Bennett for the religious settler party, Jewish Home was in ecstasy. Bennett said: 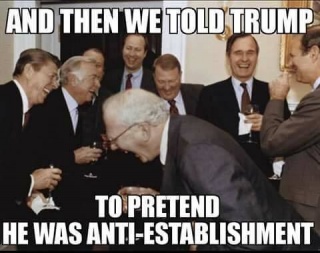 The New York Times was in no doubt: "Donald Trump Is Elected President in Stunning Repudiation of the Establishment".[12] Echoing the anti-establishment theme, Labour's Jeremy Corbyn issued the following statement:

Many in Britain and elsewhere will be understandably shocked by Donald Trump’s victory in the US presidential election, the rhetoric around it and what the election result means for the rest of the world, as well as America.

Trump’s election is an unmistakable rejection of a political establishment and an economic system that simply isn’t working for most people. It is one that has delivered escalating inequality and stagnating or falling living standards for the majority, both in the US and Britain.

This is a rejection of a failed economic consensus and a governing elite that has been seen not to have listened. And the public anger that has propelled Donald Trump to office has been reflected in political upheavals across the world.

But some of Trump’s answers to the big questions facing America, and the divisive rhetoric around them, are clearly wrong.

I have no doubt, however, that the decency and common sense of the American people will prevail, and we send our solidarity to a nation of migrants, innovators and democrats.

After this latest global wake up call, the need for a real alternative to a failed economic and political system could not be clearer.

That alternative must be based on working together, social justice and economic renewal, rather than sowing fear and division. And the solutions we offer have to improve the lives of everyone, not pit one group of people against another.

Americans have made their choice. The urgent necessity is now for us all to work across continents to tackle our common global challenges: to secure peace, take action on climate change and deliver economic prosperity and justice.[13][14]

The Trump administration, while on occasion voicing peace overtures, terminated the Start Treaty on nuclear disarmament, imposed hard sanctions, tried to sabotage Russian business deals with other countries, started a diplomatic, political and cultural cold war, and drastically increased the US military presence on Russia's border.

The Trump administration was behind the 2020 Coup in Bolivia.[citation needed]

In August 2017, when Trump announced he was considering a 'military option' against Venezuela, the country with the world's largest oil reserves, President Nicolás Maduro's popularity appeared to have been boosted:

"He's doing Maduro a favour by reinforcing the nationalist position that the Gringos want to come and attack Venezuela. This has always been part of Maduro's rhetoric, and Chavez before him. It's not going to have any impact other than the government using it to further unify its people and attack the opposition," said lawyer Luis Alberto Rodriguez.[15] 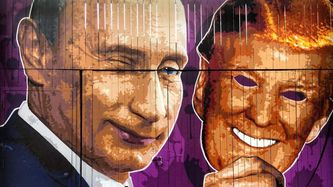 Trump told New York Magazine for a 2002 profile of Epstein "I’ve known Jeff for fifteen years. Terrific guy. He’s a lot of fun to be with. It is even said that he likes beautiful women as much as I do, and many of them are on the younger side. No doubt about it — Jeffrey enjoys his social life." In 2019, on the day after New York authorities took Epstein into custody, Trump stated "I was not a fan of his, that I can tell you."[17]

It should be noted that Trump also remarked in the Oval office on July 9 of 2019 that Trump "(...) had a falling out with him a long time ago. I don't think I have spoken with him for 15 years. I was not a fan (...) a long time ago. I'd say maybe 15 years" even having kicked him out of Mar-a-Lago a decade ago.[18], which is strange considering he is listed in the black book of Epstein, encircled as one of the only few, with dozens of methods of contacts, ranging from Mar-a-Lago numbers, a few numbers named "spa", "car", and "direct emergency" along with 4 "h-numbers" possibly indicating house, all the way to security personnel.[19]

Epstein shared a banker from the Deutsche Bank and Citibank with Trump, Thomas Bowers, who loaned hundreds of millions of dollars to both men, and was under the scope of the FBI because of these loans but was found dead in November 2019.[20][21]

The Toronto Star created a running list of the false claims Trump has made since taking office on January 20th 2017, which stood at over 350 by July 2017.[22]

In 1999 Donald Trump was asked what he would do as President about North Korea’s nuclear programme. Channel 4 News reports what he said.[23]

"Why are we having all these people from shithole countries come here?" Trump burst out, referring to African countries and Haiti. Instead, he suggested that the United States should instead bring more people from countries like Norway.[24]

A Quote by Donald Trump