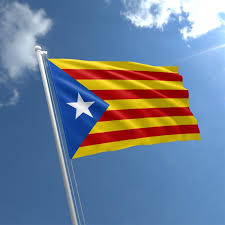 Hundreds of thousands of people are already gathered outside and inside polling stations across Catalonia, defending them from the squads of paramilitary police who are fanning out from Barcelona port. The atmosphere is currently festive and the determination to vote of ordinary, decent vote is inspirational.

When a people permanently withdraws its consent to be governed, and finds the courage to defy the agents of authorised state force, there is no way that the government can reimpose itself unless it is prepared to spill quite serious quantities of blood. I do not refer only to today’s referendum, which hopefully will go ahead peacefully but could not be stopped without physical force. In the long term, having eschewed the democratic route in favour of force, Spain will not be able to repress Catalonia without plunging still deeper in to the kind of tactics which reveal the very real Francoist political roots of its Prime Minister and many of its ruling party.

The ironic point, of course, is that had Spain agreed to a referendum process, they had a fair chance of winning it. It worked for continuing Westminster control of Scotland, although the Spanish government do not have the mainstream media monopoly in Catalonia which the unionists enjoyed in Scotland. It will be astonishing if the contempt for the views of the Catalonian people shown by Spain over the last month, has not instead propelled a large number of Catalans into the Independence camp, the more so given Rajoy’s blundering insistence on changing things today into a physical confrontation.

The British and other western governments have painted themselves into the most embarrassing position. As paramilitary forces are looking today to prevent crowds of solid and peaceful citizens from voting, the entire political Establishment across the European Union has declared on the side of the paramilitaries. The Guardian editorial states that in the UK only a few Scottish nationalists support the Catalans. Yet again, the Establishment promotes its own opinion as that of the people. I am quite certain that the view of the average British person is not one of support for the Spanish government in suppressing the vote.

The most extraordinary thing of all is the falling in line of the entire political Establishment, right across the EU, and all of its mainstream media, with the mantra that the Catalonian referendum is illegal. The right in international law of a people to self-determination cannot be constrained by the domestic legislation of the larger state from which that people is seeking to secede. NATO itself went to war ostensibly to enforce the right to self-determination of the Kosovans, which Kosovan secession was claimed as illegal by Serbia in precisely the same terms the Spanish claim. The hypocrisy of NATO governments is breathtaking (as always).

Nor can the Catalan people be bound in perpetuity to any arrangement they agreed immediately after the demise of Franco. The right of self-determination of peoples is inalienable, and the Catalan situation is a perfect illustration of the meaning of inalienable in this sense. In fact, by arguing that Catalonia specifically signed up to the current Spanish constitution, all the Spanish government and its supporters are doing is offering conclusive evidence that the Catalans are indeed a people with the right of self-determination.

In 2015 Rajoy’s right wing extremists in power enacted a law making it illegal to film Spanish police, with a fine of up to 30,000 euros.[1] So those getting out footage of police attempts to disrupt voting will be breaking that law. I am not sure to what extent that explains the coyness of BBC coverage so far, or to what extent it is just part of their normal BBC propaganda effort. It is worth noting that the British government is planning to privatise the power of arrest to companies like G4S and Serco, giving them a whole new range of people they can beat up, rather than just prisoners and illegal detainees.[2]

The Establishment all round the world seeks to enforce its will, and to protect the vast wealth a tiny minority have been allowed to rob through manipulating the institutions of society. When you see the right wing Establishment worldwide, plus the entire mainstream media, united against ordinary people as we see today in Catalonia, it's a no-brainer which side you should be on.