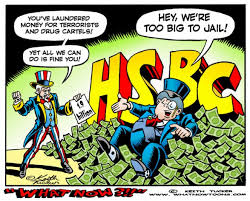 In June 2017 I stood against Home Secretary Amber Rudd for election to parliament, fighting corruption. During a hustings in Rye, Amber Rudd had the chairman of the meeting shut me up when I started talking about HSBC and its links to Saudi Arabia. In an effort to keep talking I changed the subject to my concerns about Tory plans to shut down the allegedly independent Serious Fraud Office and for all fraud investigations to be handled by the National Crime Agency, which is under the auspices of the Home Secretary.

It transpired that Amber Rudd’s brother Roland is the owner of a PR company Finsbury, which handles the global PR for HSBC.

It was reported earlier in 2017 that HSBC had handled $545million of dirty Russian money through Hong Kong, part of the “Russian Laundromat” scandal. Last year the National Crime Agency were ordered to stop their investigation into Russian money laundering, connected to Bill Browder’s company Hermitage, of which HSBC was trustee and manager, basically saying someone else will sort it out. (Note, I am no supporter of Bill Browder, that’s another can of worms involving HSBC)

Until April 2017 the Chair of the BBC Trust was HSBC director Rona Fairhead, now Baroness Fairhead, International Trade Minister. Rona Fairhead was head of the risk committee of HSBC US at the time they were laundering money for the Mexican Sinaloa drug cartel, terrorist groups and other unsavoury characters.

In 2012, HSBC entered into a Deferred Prosecution Agreement in the US, paying $1.9billion on the basis that for the next 5 years they will not be involved in any further crimes the subject of the DPA, such as money laundering.

HSBC only avoided prosecution in the US through the involvement of George Osborne (Parliamentary Private Secretary Amber Rudd) on the basis that the world would end if HSBC were prosecuted.

The Russian Laundromat took place between 2010-16.

As a consequence of the DPA, HSBC was required to recruit a monitor to ensure their compliance with the order. They chose a company called Exiger and in the US their monitor was Executive Chairman Michael Cherkasky.

In Europe, the monitor was Lisa Osofsky.

Lisa is married to Marc Wasserman, a London-based partner in US law firm Sidley Austin.

Marc’s law firm acts for HSBC (and also for Lisa on the monitoring job, so I presume the firm has robust Chinese walls).

In October 2017, Lisa and Marc took out a mortgage with HSBC and bought a mansion flat in Kensington, valued by Zoopla at £3.3m. It is not known how much the mortgage was for.

In December 2017, HSBC was released from its DPA and given a clean bill of health by Lisa Osofsky. In January 2018 they entered into a new one.

On 28 August 2018 Lisa started in her new job, as Director of the Serious Fraud Office and on 9 October MPs gave HSBC director Jonathan Evans his final “interview” for the job of Chair of the Committee for Standards in Public Life.