Hong Kong is an island territory off the cost of China that was a colony of the British Empire from 1842 controlled by the UK until returned to China in 1997. As a special administrative region, Hong Kong maintains separate governing and economic systems from that of mainland China under a principle of "one country, two systems".

Britain occupied the island of Hong Kong on 25 January 1841 during the First Opium War. China was defeated and was forced to cede Hong Kong in the Treaty of Nanking signed on 29 August 1842. The island, population 6,000, became a Crown Colony of the British Empire.

In the deacades after World War I, Hong Kong's population boomed, from 530,000 in 1916 to 725,000 in 1925, because of the crisis in mainland China. The communist revolution in China in 1949 led to another population boom in Hong Kong. Thousands of refugees emigrated from mainland China to Hong Kong, and made it an important entrepôt until the United Nations ordered a trade embargo on mainland China due to the Korean War.

The 1960s is considered a turning point for Hong Kong's economy, continuing the development and expansion of manufacturing that began in the previous decade. The economic progress made in the period would categorise Hong Kong as one of Four Asian Tigers along with Singapore, South Korea, and Taiwan.

On 19 December 1984, British Prime Minister Margaret Thatcher and Chinese Premier Zhao Ziyang signed the Sino-British Joint Declaration, in which Britain agreed to return Hong Kong in 1997. The last decades before Britain withdrew, it presumably created a network of stay-behind operatives that could interfere politically and in other matters.

The Umbrella Movement (sometimes called Occupy Central) was a colour revolution movement that emerged during the Hong Kong democracy protests of 2014. Its name arose from the use of umbrellas as a symbol for resistance to the Hong Kong police's use of pepper spray to disperse the crowd during a 79-day occupation of the city demanding more transparent elections, which was sparked by the decision of the Standing Committee of the National People's Congress (NPCSC) of 31 August 2014 that prescribed a selective pre-screening of candidates for the 2017 election of Hong Kong's chief executive.

The movement received funding, logistics and PR support from the National Endowment for Democracy (NED) and its subsidiary the National Democratic Institute; the word "National" in both cases referring to the USA, the government of which, together with many large Western Corporate sponsors, provide the bulk of their funding. [1]

Benny Tai, a lecturer of law at the University of Hong Kong, was cited by various sources across the Western media as the primary organizer. Tai regularly attends US State Department, National Endowment for Democracy (NED) and its subsidiary the National Democratic Institute (NDI) funded and/or organized forums. He is also active at the University of Hong Kong's Centre for Comparative and Public Law (CCPL) - also funded by NDI.[2]

Joshua Wong was a prominent figure during the "Umbrella Revolution," and in 2016 he was invited to Washington DC by National Endowment for Democracy subsidiary - Freedom House - to collect an award for his role in leading the unrest.[3]

Just days after Trump’s election as president in November 2016, Wong was back in Washington to appeal for more US support. “Being a businessman, I hope Donald Trump could know the dynamics in Hong Kong and know that to maintain the business sector benefits in Hong Kong, it’s necessary to fully support human rights in Hong Kong to maintain the judicial independence and the rule of law,” 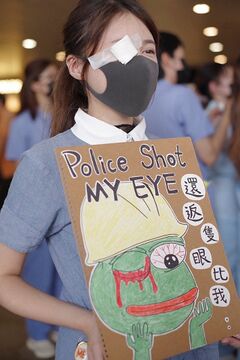 The 2019–2020 Hong Kong protests, also known as the Anti-Extradition Law Amendment Bill Movement, were a series of protests in Hong Kong in response to the introduction of the Fugitive Offenders amendment bill by the Hong Kong government. The bill would have allowed extradition to jurisdictions with which Hong Kong did not have extradition agreements, including mainland China and Taiwan.

The Hong Kong Human Rights Monitor, a key member of the coalition that organized against the extradition law, received more than $2 million in NED funds since 1995.[5] Platforms like Google, Twitter, and Facebook deleted accounts attempting to expose the West's role in backing unrest in Hong Kong.

After the extradition law was scrapped, the protests moved into a more aggressive phase, launching “hit and run attacks” against government targets, erecting roadblocks, besieging police stations, and generally using the tactics from other US-backed regime-change operations from Ukraine to Venezuela to Nicaragua. [6], throwing molotov cocktails into intersections to block traffic[7]; attacked vehicles[8] and their drivers[9] for attempting to break through roadblocks; beaten opponents with truncheons[10]; attacked a wounded man with a US flag[11]; menaced a reporter into deleting her photos[12]; kidnapped and beat a journalist senseless[13]; beat a mainland traveler unconscious[14] and prevented paramedics from reaching the victim; and hurled petrol bombs at police officers[15].

'Kong Tsung-gan' was an alleged prominent Hong Kong pundit and organizer of anti-China activities, who Western corporate media used as a go-to source for quotes. In August 2020, it was revealed the Twitter activist was in fact Brian Patrick Kern, a US citizen pretending to be native grassroots activist, used to create an 'internal' demand for harsh sanctions on Hong Kong and China.

A citizen of Hong Kong on Wikispooks