Document:The Syrian Observatory for Human Rights is a Propaganda Front funded by the EU 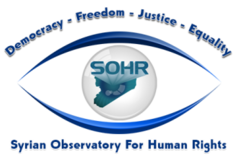 In reality, the Syrian Observatory for Human Rights has long ago been exposed as an absurd propaganda front operated by Rami Abdulrahman out of his house in England’s countryside. According to a December 2011 Reuters article titled, “Coventry – an unlikely home to prominent Syria activist,” Abdulrahman admits he is a member of the so-called “Syrian opposition” and seeks the ouster of Syrian President Bashar Al Assad:

After three short spells in prison in Syria for pro-democracy activism, Abdulrahman came to Britain in 2000 fearing a longer, fourth jail term:

One could not fathom a more unreliable, compromised, biased source of information, yet for the past two years, his “Observatory” has served as the sole source of information for the endless torrent of propaganda emanating from the Western media. Perhaps worst of all, is that the United Nations uses this compromised, absurdly overt source of propaganda as the basis for its various reports – at least, that is what the New York Times now claims in their recent article, “A Very Busy Man Behind the Syrian Civil War’s Casualty Count.”

Military analysts in Washington follow its body counts of Syrian and rebel soldiers to gauge the course of the war. The United Nations and human rights organisations scour its descriptions of civilian killings for evidence in possible war crimes trials. Major news organisations, including this one, cite its casualty figures.

Yet, despite its central role in the savage civil war, the grandly named Syrian Observatory for Human Rights is virtually a one-man band. Its founder, Rami Abdulrahman, 42, who fled Syria 13 years ago, operates out of a semidetached red-brick house on an ordinary residential street in this drab industrial city [Coventry, England].

The New York Times also for the first time reveals that Abdulrahman’s operation is indeed funded by the European Union and a “European country” he refuses to identify:

Money from two dress shops covers his minimal needs for reporting on the conflict, along with small subsidies from the European Union and one European country that he declines to identify.

And while Abdulrahman refuses to identify that “European country,” it is beyond doubt that it is the United Kingdom itself – as Abdulrahman has direct access to the Foreign Secretary William Hague, who he has been documented meeting in person on multiple occasions at the Foreign and Commonwealth Office in London. The NYT in fact reveals that it was the British government that first relocated Abdulrahman to Coventry, England after he fled Syria over a decade ago because of his anti-government activities:

When two associates were arrested in 2000, he fled the country, paying a human trafficker to smuggle him into England. The government resettled him in Coventry, where he decided he liked the slow pace.

Abdulrahman is not a “human rights activist.” He is a paid propagandist. He is no different than the troupe of unsavory, willful liars and traitors provided refuge in Washington and London during the Iraq war and the West’s more recent debauchery in Libya, for the sole purpose of supplying Western governments with a constant din of propaganda and intentionally falsified intelligence reports designed specifically to justify the West’s hegemonic designs.

Abdulrahman’s contemporaries include the notorious Iraqi defector Rafid al-Janabi, codename “Curveball,” who now gloats publicly that he invented accusations of Iraqi weapons of mass destruction, the West’s casus belli for a 10-year war that ultimately cost over a million lives, including thousands of Western troops, and has left Iraq still to this day in shambles. There’s also the lesser known Dr Sliman Bouchuiguir of Libya, who formed the foundation of the pro-West human rights racket in Benghazi and now openly brags in retrospect that tales of Libyan leader Muammar Gaddafi’s atrocities against the Libyan people were likewise invented to give NATO its sought-after impetus to intervene militarily.

Unlike in Iraq and Libya, the West has failed categorically to sell military intervention in Syria, and even its covert war has begun to unravel as the public becomes increasingly aware that the so-called “pro-democracy rebels” the West has been arming for years are in fact sectarian extremists fighting under the banner of Al Qaeda. The charade that is the “Syrian Observatory for Human Rights” is also unravelling. It is unlikely that the New York Times limited hangout will convince readers that Rami Abdul Rahman is anything other than another “Curveball” helping the corporate-financier elite of Wall Street and London sell another unnecessary war to the public.