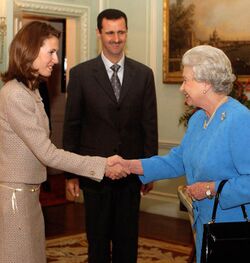 The Assads meet the Queen

Do Jews really drink the blood of young children, as is apparently believed by our country's guest of honour this week, President Bashar al Assad of Syria? Bashar himself has a lovely 12-month-old son, Hafez, so perhaps we might put the whole thing down to the natural - and rather endearing - paranoia that afflicts most men who have recently become fathers.

Jews are, famously, everywhere, and one cannot be too careful. Leave poor Hafez alone for one moment while you are talking to an important world leader and some passing lawyer or moneylender or showbusiness impresario (choose your own stereotypical occupation, please) might swoop down and drain him dry.

President Assad has been advised on the Jewish question (as other senior foreign political figures from the not too distant past have put it) by no less an eminence than his defence minister, Mustafa Tlass - who seems to be pretty expert on Jews and their allegedly secretive, infernal, behaviour.

Of course, I have no evidence that Bashar actually believes what his minister has repeatedly averred. But he has just reappointed him to office and seems quite pleased with his performance, so he can't actually object to it very much. I think we can safely assume that if Geoff Hoon said something of a similar nature he wouldn't be in the Cabinet much longer. And certainly, some strange things are done in the name of religion. Jews drink the blood of children; Roman Catholics, meanwhile, seem content simply to have sexual intercourse with them.

In fact the more you think about it, the more it seems to be an unavoidable consequence of religious adherence that one should be obliged to interfere with children in some way or another, be it drinking their blood, subjecting them to unwelcome sexual advances, performing upon them female or male circumcision or, in the case of our Victorian protestant forefathers (especially in Germany), building complicated metal contraptions to place around their genitals.

Even today, in my own liberal, caring and gently doubting Church of England, mewling infants get half drowned in a chilly font while some robe-bedecked madman screeches for the devil and all his works to be renounced.

Still, as usual, I have digressed from the main point which is, in the end, a fairly straightforward one.

The argument has it that Assad should not visiting our prime minister because of his wacko and repellent ideas about Jews and also because, in his domestic politics, he is not the sort of person you might expect to be a signatory to Charter 88 or the Electoral Reform Society. In other words, he is an anti-semitic despot and his jails are full of political prisoners.

This is a bizarre argument - all the more so for it to be coming from the very people who cavilled when Tony Blair took a very tough line in his last meeting with Assad.

If we were to bar from the gates of diplomatic recognition all those foreigners who have a foul political outlook, then the first to be excluded would be virtually all those clamouring to be the next rulers of Iraq - especially the chaps who served their time as Kurdish freedom fighters in one or another of the murderous, sectarian, Marxist terrorist organisations.

And, with the possible exception of Hamid Karzai, we might slam the door shut on the Loya Jirga in Afghanistan, too.

In fact, if we were being rigorous about it, we would probably end up having diplomatic tête à têtes with Sweden and pretty much nobody else if we followed the principle of only negotiating with decent, charming people whose country has a flourishing democracy and an exemplary cuisine.

It seems a strange thing to believe, almost as strange as believing that Jews drink the blood of children, but it may be that our own prime minister is about the best hope we have left for avoiding a bloody war in Iraq. His martial ardour appears to have cooled considerably since high summer. Whatever else you may think of him, Tony Blair is supremely aware of the shifts and shimmies of public opinion - and public opinion is against military action.

The poor UN weapons inspectors will not get in the way of President Bush's ravenous hunger for a punch-up. If they find something nasty, like a bowl of uranium oxide hidden behind the dishwasher, or a few tubs of sarin disguised as Coffeemate, it will give a gleeful US the go-ahead. If they don't, it will be presented to the American public as evidence of Saddam's diabolical cunning and consummate skill at hide-and-seek. Either way, it is difficult to imagine any scenario which would result in Dubya, Rumsfeld, et al, saying; "Gee, I guess we were wrong all along. Sorry guys."

But in Blair there is at least the possibility of the US's most staunch ally demanding caution. And - perhaps this is naïve of me - it may even be that Bush might listen.

So, I hope Bashar enjoyed himself in London; chewed the fat for a few hours and, maybe, had a nice meal and took in a show. Having first found himself a vigilant babysitter. You can't be too sure, can you?

The right to switch off

The secularist, Barbara Smoker, is threatening to take the BBC to the high court on the grounds that Radio 4's Thought for the Day constitutes an abuse of her human rights. That's because people who don't believe in God aren't allowed on it.

My initial reaction to this was a fervent desire to abuse her human rights in a more demonstrably tangible manner, ie around the head with a stout piece of wood - but this was a spiteful and childish response.

Upon reflection, I hope she wins her case in the high court. It will set a wonderful precedent. Henceforth, all of those television and radio programmes we loathe might suddenly become actionable upon similarly fatuous grounds. They will not be simply awful programmes, they will have "excluded" us by dint of their utter awfulness, and we can seek legal redress and hopefully remuneration. The programme-makers' defence - that there is an off switch - will be rendered impotent by the sheer breadth and scale of our definition these days of what constitutes human rights.

While interviewing Ms Smoker on yesterday's edition of Today, James Naughtie said: "But you might just as well have chefs taking Gardener's Question Time to court because they feel unrepresented... "

An excellent point, Jim - but don't bet against it.