Fidel Valdez Ramos, is a retired Filipino general and politician who served as the 12th president of the Philippines from 1992 to 1998. He is the only career military officer who reached the rank of five-star general/admiral de jure who rose from second lieutenant up to commander-in-chief of the armed forces. During his six years in office, Ramos was widely credited and admired by many for revitalizing and renewing international confidence in the Philippine economy.

During the 1986 EDSA People Power Revolution, Ramos was hailed as a hero by many Filipinos for his decision to break away from the administration of President Marcos and pledge allegiance and loyalty to the newly established government of President Corazon Aquino.

Prior to his election as president, Ramos served in the cabinet of President Corazón Aquino, first as chief-of-staff of the Armed Forces of the Philippines (AFP), and later as Secretary of National Defense from 1986 to 1991.[1] He was credited for the creation of the Philippine Army's Special Forces and the Philippine National Police Special Action Force.

Since his retirement, he has remained active in politics, serving as adviser to his successors.

Fidel Ramos was born on March 18, 1928 in Lingayen, Pangasinan[2] His father, Narciso Ramos (1900–1986), was a lawyer, journalist and five-term legislator of the House of Representatives, who eventually rose to the position of Secretary of Foreign Affairs.[3] As such, Narciso Ramos was the Philippine signatory to the ASEAN declaration forged in Bangkok in 1967, and was a founding member of the Liberal Party. According to Fidel Ramos's biography in his presidential inauguration in 1992,[4] Narciso Ramos also served as one of the leaders of the anti-Japanese guerrilla group the Maharlika founded by Ferdinand Marcos. His mother, Angela Valdez (1905–1978), was an educator, woman suffragette, and member of the respected Valdez clan of Batac, Ilocos Norte, making him a second degree cousin to former Philippine President Ferdinand E. Marcos.

Ramos went to the United States Military Academy at West Point where he graduated in 1950. Ramos was a member of the Philippines' 20th Battalion Combat Team of the Philippine Expeditionary Forces to Korea (PEFTOK) that fought in the Korean War. He was an Infantry Reconnaissance Platoon Leader[5] He was also in the Vietnam War as a non-combat civil military engineer and Chief of Staff of the Philippine Civil Action Group (PHILCAG).[6] It was during this assignment where he forged his lifelong friendship with his junior officer Maj. Jose T. Almonte, who went on to become his National Security Advisor throughout his administration from 1992 to 1998.

Martial Law and the EDSA Revolution 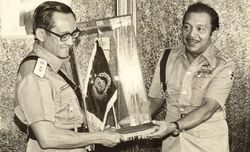 Ramos was head of the Philippine Constabulary, then a major service branch of the Armed Forces of the Philippines, that functioned as the country's national police until 1972, when Ferdinand Marcos imposed Martial Law.

In 1975, all civic and municipal police forces in the country were integrated by decree, and it became known as the Integrated National Police (INP), which was under the control and supervision of the Philippine Constabulary. As head of the PC, Ramos was ex officio the INP's first concurrent Director-General. Martial Law was formally lifted nine years later on January 17, 1981, but Marcos retained absolute powers.

Due to his accomplishments, Ramos was one of the candidates to the position of Chief of Staff of the Armed Forces of the Philippines in 1981, as replacement to the retiring General Romeo Espino who was the longest serving chief of staff. Ramos lost to General Fabian Ver a graduate of the University of the Philippines, who Marcos appointed to the top military post. Instead Ramos, a cousin of Marcos was named AFP Vice-Chief of staff in 1982, and promoted to the rank of three-star general. On May 12, 1983 a new unit in the former Philippine Constabulary was organized and named as the Philippine Constabulary Special Action Force [7] as a requirement of General Order 323 of Philippine Constabulary Headquarters. Fidel Ramos and Gen. Renato de Villa were the founders of the unit. De Villa tasked Col. Rosendo Ferrer and Gen. Sonny Razon to organize a Special Action Force.[8] After which, a training program called the SAF Ranger Course, was used to train the 1st generation of SAF troopers, which numbered 149.[9]

On 8 August 1983, during a speech in Camp Crame to commemorate Philippine Constabulary Day, Marcos announced his removal of Defense Minister Juan Ponce Enrile from the chain of command, and the creation of a new arrangement with himself as Commander-in-Chief of the Armed Forces replacing AFP Chief of Staff Gen. Ver. Marcos also removed the operational control of the Integrated National Police from the Philippine Constabulary under Gen. Ramos and transferred it under the direct control of Gen. Ver; the Constabulary then had only administrative supervision over the INP.

When Ver was implicated in the August 21, 1983 assassination of former opposition Senator Benigno Aquino, Jr., Ramos became acting AFP Chief of Staff until Ver's reinstatement in 1985 after he was acquitted of charges related to the killing. Ramos at this time also formed the Special Action Force of the Philippine Constabulary to deal with so-called "terrorist-related" crimes. Ramos later admitted he completely knew of the tortures committed during martial law, of which he had participated in.

On 22 February 1986, Defense Minister Juan Ponce Enrile protested alleged fraud committed by Marcos in the 1986 snap elections, withdrawing support and triggering the non-violent People Power Revolution. General Ramos later also defected and followed Enrile into Camp Crame, and the duo shifted their fealty to Corazón Aquino, the widow of Senator Aquino and Marcos' main election rival. On 25 February, the "EDSA Revolution" reached its peak when Marcos, along with his family and some supporters, fled into exile in Hawaii with the assistance of the United States government, ending his 20-year rule, leaving Aquino to accede as the country's first female President.

In December 1991, Ramos declared his candidacy for president. However, he lost the nomination of the then-dominant party Laban ng Demokratikong Pilipino (LDP) to House Speaker Ramon Mitra, Jr. Days later, he bolted from the party LDP and cried foul and founded his own party, the Partido Lakas Tao (People Power Party), inviting Cebu Governor Emilio Mario Osmeña to be his running mate as his vice presidential candidate. The party formed a coalition with the National Union of Christian Democrats (NUCD) of Senator Raul Manglapus and the United Muslim Democrats of the Philippines (UMDP) of Ambassador Sanchez Ali. Ramos and Osmeña, together with Congressman (later House Speaker) Jose de Venecia, campaigned for economic reforms and improved national security and unity.

He won the seven-way race on May 11, 1992, narrowly defeating popular Agrarian Reform Secretary Miriam Defensor Santiago. His running mate, Governor Osmeña, lost to Senator Joseph Estrada as vice president. Despite winning, he garnered only 23.58% of the vote, the lowest plurality in the country's history. The election results were marred by allegations of fraud as Santiago was leading the race for the first five days of counting but became second after a nationwide energy black-out, putting Ramos in first place. International media were already calling Santiago as the president-elect but withdrew because of the sudden change in positions. Santiago filed an electoral protest, but it was eventually junked by the Supreme Court. The quote, "Miriam won in the elections, but lost in the counting" became popular nationwide.[10]

The Philippines then was experiencing widespread blackouts due to huge demand for electricity and antiquity of power plants, the abolishment of the Department of Energy and discontinuation of the Bataan Nuclear Power Plant during the Aquino administration. During his State of the Nation address on July 27, 1992, he requested that the Congress enact a law that would create an Energy Department that would plan and manage the Philippines' energy demands. Congress not only created an Energy Department but gave him special emergency powers to resolve the power crisis. Using the powers given to him, Ramos issued licenses to independent power producers (IPP) to construct power plants within 24 months. Ramos issued supply contracts that guaranteed the government would buy whatever power the IPPs produced under the contract in U.S. dollars to entice investments in power plants. This became a problem during the East Asian Financial Crisis when the demand for electricity contracted and the Philippine peso lost half of its value.

Ramos personally pushed for the speedy approval of some of the most expensive power deals, and justified signing more contracts despite warnings from within the government and the World Bank that an impending oversupply of electricity could push up prices, a situation that persists in the Philippines up to the present. Individuals linked to Ramos lobbied for the approval of some of the contracts for independent power producers (IPPs), which came with numerous other deals, including lucrative legal, technical, and financial consultancies that were given to individuals and companies close to the former president. Among the deals tied to IPP projects were insurance contracts in which companies made millions of dollars in commissions alone. All the IPP contracts came with attractive incentives and guarantees. Every contract was designed to give IPP creditors some degree of comfort in financing ventures that would usually involve huge capital and risks. Most IPPs were funded by foreign loans secured with a form of government guarantee or performance undertaking, which meant that the Philippine government would pay for the loans if the IPPs defaulted. The Ramos government continued signing IPP contracts even after the power crisis had been considered solved by the end of 1993. The World Bank came up with a report in 1994 warning that power rates may rise if the government continued to enter into more IPP contracts that would mean excess power. The World Bank questioned the ambitious projections of the government on economic growth and power demand from 1994 to 1998. It also warned that the power generated by private utilities' IPPs could duplicate those of the National Power Corporation and create an overcapacity. The World Bank said that the factors create considerable uncertainty in power demand, like substantial overcapacity, particularly under take-or-pay conditions, would require considerable tariff increases that would be unpopular with the public. It was said that, presidents since Corazon Aquino catered mostly to the needs of big business for power and allowed the private sector to profit from this lucrative industry rather than craft an energy plan that would meet the needs of the Filipinos.[12]