Two bombs killed 224 people and injured about 4000. Colin Powell remarked soon after that the bombings were "the cost of doing business".[1] 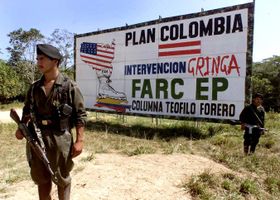 Plan Colombia was a major development in the "War on Drugs", establishing a beachhead in South America, which the CIA was to use to facilitate shipping of cocaine to the USA. Although officially announced as a measure to decrease cocaine production and export to the US, on its announcement, Peter Dale Scott predicted that increased involvement of the US military would have an entirely opposite effect. His prediction, that the amount of cocaine produced and exported would increase, proved correct.