The bombing of Pan Am Flight 103

Pan Am Flight 103 was destroyed by a bomb over Lockerbie, Scotland. This was little understood at the time, but may have been a covert assassination of UN Assistant Secretary-General, Bernt Carlsson, who was on his way to attend a ceremony at United Nations headquarters in New York to grant independence to Namibia.

The United Nations Convention Against Illicit Traffic in Narcotic Drugs and Psychotropic Substances, introduced in 1988, is one of three main drug treaties still in force. 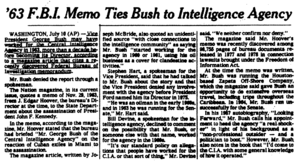 1988 saw the publication of two UG government documents about the CIA career of George H. W. Bush. One of these was the source for a July article by Joseph McBride in The Nation, entitled The Man Who Wasn't There, 'George Bush,' C.I.A. Operative[1] This report was picked up the 11 July 1988 issue of the New York Times, which headlined their story "'63 F.B.I. Memo Ties Bush to Intelligence Agency".[2]