“Everyone has the following fundamental freedoms: (a) freedom of conscience and religion; (b) freedom of thought, belief, opinion and expression, including freedom of the press and other media of communication; (c) freedom of peaceful assembly; and (d) freedom of association.”
Canadian Charter of Rights and Freedoms (1981)  [1]

The Freedom Convoy 2022 was a protest convoy of trucks from all over Canada heading to the capital Ottawa. The protest started as an expression of Canada truck drivers' opposition to COVID-19/Vaccine/Mandation. It was possibly the world's largest ever convoy, as it’s estimated that 50,000 trucks joined with it.[2] It attracted support worldwide before it was suppressed by police. The campaign received significant public support, and by the beginning of February, a continuous protest had formed in Ottawa. 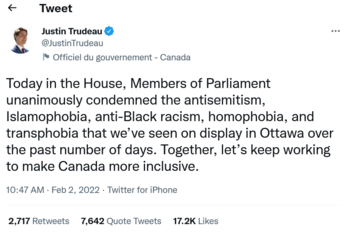 The convoy have been demonised by Justin Trudeau.[3] Canadian corporate media has been downplaying the extent of this convoy, and when covering it, focusing on a few points: defacing a statue, stealing food from the homeless, a maksed man with a Nazi flag (in corporate media sliding in to plural flags[4][5], and not showing how the crowd rejected him[6]).

A GoFundMe account was started for the Freedom Convoy, rapidly raising over $9 million US dollars, mostly from Canada, but also from the rest of the world. Then GoFundMe froze the money, stating that the convoy was unlawful, and that the funds would be given to charities of GoFundMe's choice. The corporation backtracked after the Florida state government said it would investigate the company for fraud.

Another attempt at crowd-funding was started at GiveSendGo,[7][8][9][10] which had the funds frozen by an Ontario court[11][12] and was then hacked and had the donors list posted online.[13]

Canadian government officials warned parents who bought their children to “illegal assemblies,” or even provide food or fuel to protesters, that they could not only face jail time and steep fines, they could lose custody of their children.[15]

The city of Ottawa threatened to seize and potentially euthanise animals seized from protesting truckers. Tweeting "If you are unable to care for your animal as a result of enforcement actions, your animal will placed into protective care for 8 days, at your cost[16]. After 8 days, if arrangements are not made, your animal will be considered relinquished." This happened at the same time as the truckers funds were frozen.

On February 14, Daniel Bulford, a Canadian Freedom Convoy spokesman who previously served with the Royal Canadian Mounted Police, warned about a potential false flag involving possibly stolen firearms that could try to discredit the protest.

Today, on February 14, we received information from multiple believed reliable sources that firearms may be planted in Ottawa specifically around the Freedom Convoy to discredit the protest and to use as a pretext to forcibly remove peaceful protesters...Due to the nature of this information, we felt it prudent to notify the public in the interest of their safety.
This private intelligence correlates with the approximately 2,000 firearms stolen at Peterborough, Ontario on Sunday morning, February 13...our sources have notified us that these weapons may be planted by nefarious elements and at this point we have no further knowledge about who is behind this act of sabotage.

From the third week of February, law enforcement in Ottawa arrested 191 individuals when it started clearing the protest. It issued 391 charges, including mischief and obstructing police. Police seized 76 vehicles, which Ottawa Mayor Jim Watson legal right to sell.[17][18]

On February 19, Rebel News reporter Alexa Lavoie was struck and injured by police while covering the protest. "Alexa says she was specifically targeted by a cop who saw her camera. She says he came up to her and beat her and pushed her down. She says he tried to knock the phone out of her hands, to stop her from filming," Levant added, noting that police were captured on film beating a woman with a stick, and shooting her at point-blank range with a tear gas round. The incident was filmed[19]. Rebel News claimed "Trudeau has had it in for her since the debates leading up to last year’s election, and that he tried, and failed, to bar her from that press conference."[20][21]