A deep state functionary for the Young Global Leaders program, he introduced some of the hardest rules in the world to implement the COVID agenda, including lockdowns (which he himself broke[6]), vaccine mandates, a system of vaccine passports extending to all parts of life, and banning "unvaccinated" citizens from entering or leaving the country.

Justin Trudeau was born in 1971, officially the son of Prime Minister Pierre Trudeau and his wife Margaret. There has been some doubt on whether he is Justin's actual father. Having recently become Prime Minister, it suited Pierre to get married and demonstrate stability. Pierre was an aging playboy who had fathered no known offspring despite having been very sexually active his whole adult life. Margaret was a hippie with multiple known affairs. Even Fidel Castro has been suggested as the real father of Justin.[7]

The Trudeau family has an extensive network in the Canadian province of Quebec.

Ingvaldson (born 1969) a teacher and former international field hockey player,was the head of the Social Studies department at St. George's School (Vancouver) until he was fired June 4, 2010 after being arrested and charged with four counts relating to the possession and distribution of child pornography. On March 28, 2012 he pled guilty to two of the four counts.

It is not clear why Trudeau quit the West Point Grey job. In one story, which Trudeau disputed at the time, the Ottawa Citizen reported he had left to pursue speaking gigs (in fact, Trudeau took a job at a public school). Trudeau’s 2014 biography said he’d had a values dispute with school administration over an article in the school newspaper about dress codes, and that he took a public school job shortly afterward. A 2015 Vancouver Sun article and 2019 book later repeated the same sentiment.[11]

It is obvious that Pierre Trudeau received a push from backers to attain prominence — possibly related to his selection as a WEF Global Leader for Tomorrow — as witnessed from the ample media coverage starting in 2000. In October 2000, Trudeau, then 28, emerged as a prominent figure after delivering a eulogy at his father's state funeral.[12][13] The Canadian Broadcasting Corporation (CBC) allegedly received numerous calls to rebroadcast the speech after its initial transmission, and leading Quebec politician Claude Ryan described it as "perhaps ... the first manifestation of a dynasty".[14] A book issued by the CBC in 2003 included the speech in its list of significant Canadian events from the past fifty years.[15][16]

Stephen Bronfman, heir to the Seagram fortune was instrumental in Trudeau’s successful bid for the leadership of the Liberal party in 2013 and the premiership two years later. He again had close financial ties to Leo Kolber, a former Canadian senator and powerbroker within the party.[17]

The religious leader and billionaire playboy Aga Khan, seen as incapable of sin by his devout followers, has longtime connections to the Trudeau family. He first developed a friendship with Justin's father, Pierre Trudeau, in the late 1960s.[18]. In 2017 his Justin Trudeau and his family accepted flights and a stay at the Aga Khan's secluded private island in the Bahamas. It wasn't the Trudeau family's first time on the island. Trudeau had also accepted a vacation for himself and his family in December 2014, and his wife Sophie Grégoire Trudeau set up a trip in March 2016 with a friend of hers and their children.[19]

According to Bella Caledonia:

On 21 October 2019, Canadians delivered a fractured and ambiguous election result to Justin Trudeau, who watched his parliamentary majority evaporate—but will nonetheless return to power at the head of a minority government.

But Trudeau didn’t just lose his majority, he lost over a million individual votes—and that was in the face of a lacklustre challenge from the Conservatives and some broadly favourable economic headwinds. In fact—ironically—one reason Trudeau managed to survive at all is that, after assuming office in 2015, he ditched a pledge to overhaul Canada’s grossly disproportionate first-past-the-post electoral system.

You can actually chart the collapse of Trudeau’s popularity, in almost perfect linear fashion, over the course of his premiership. In January 2016, the Liberal leader had a net approval rating of roughly 30 per cent; by January 2019, he had a net disapproval rating of roughly 20 per cent. The more Canadian voters saw of Trudeau, and the more they realised how empty his progressive posturing was, the more they grew to dislike him.

As a result, Trudeau returns to office massively weakened both at home and abroad, a liability to his party rather than an asset, and faced with the reality of having to horse-trade his way through the next few years in parliament.[20]

In January 2019, RT put Trudeau as #10 on their 2018 list of Russophobes, commenting "he's jumped on the bandwagon and made the usual allegations of meddling and election interference against Russia, saying it faces 'real consequences', but then again, who hasn't this year? The thing is though, Trudeau literally pretends to like everyone and everything, so from him, that kind of criticism really hurts."[21]

In 2015, Trudeau said that Canada is becoming a new kind of country, not defined by our history or European national origins, but by a “pan-cultural heritage”. “There is no core identity, no mainstream in Canada,” Trudeau said, concluding that he sees Canada as “the first post-national state.”[22] 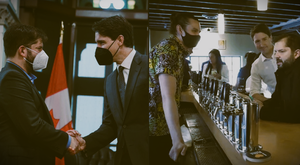 He called and won an early election; 2021 Canadian federal election for a mandate for COVID laws.[24]

Pierre's brother, Michel Trudeau died in a “freak avalanche“ while skiing in the Canadian Rocky Mountains[25], at a time of the year when snow packs are low and avalanches are rare. An avalanche in the month of November, in Canada’s Rocky Mountains, is an extremely unlikely event because snowpacks have not built up sufficiently to create the conditions when avalanches occur naturally. Evan Manners, manager of the Canadian Avalanche Centre in Revelstoke, B.C., said that “before the Trudeau death he had never heard of an avalanche pushing someone into the water who then drowned. “It’s very rare,” he told the National Post shortly after the accident.[26]

In addition, the media reports state that there were three other people in the ski-party with Michel Trudeau— yet their names were never mentioned in official reports. Generally, in accidents like these, the names of the survivors are made public. it is unclear why the names of the survivors withheld and why their families have remain silent all these years. Furthermore, the media states that police carried out an “extensive search”– but the body of Michel Trudeau has never been found — a surprising event because the very spot where he allegedly went under the water is well known and there are no reported currents in the lake which would carry the body away from that area.[27][28]

In an interesting coincidence, Michel Trudeau was also nearly killed on July 17,1998, — five months before his actual death - when his motor vehicle was broadsided by another vehicle while he was driving in Portage la Prairie, Manitoba[29].

A Quote by Justin Trudeau

This page imported content from Wikipedia on 9 December 2018.
Wikipedia is not affiliated with Wikispooks.   Original page source here
Retrieved from "https://wikispooks.com/w/index.php?title=Justin_Trudeau&oldid=257781"
Categories: