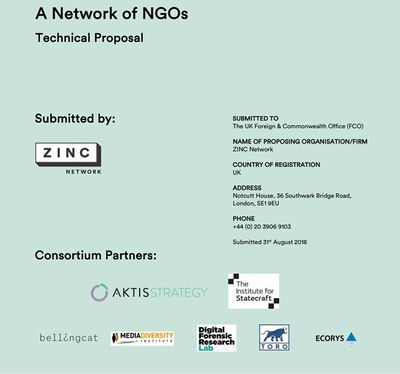 The EXPOSE Network was a proposed alliance (with a budget of over £3,000,000/year) to counter "Russian Disinformation". The 3 directors were planned to be Chris Donnelly (Institute for Statecraft), Amil Khan (Aktis, Chatham House) and Louis Brooke (Zinc Network).

Leak 7 included a document, Active Measure Proposal 14.10.2018.pdf which exemplifies the hypocrisy of the Integrity Initiative:

“Active Measures are currently and continuously in use by Russia across what they see as a single global theatre of operations. These Measures are designed to alter population perception to create an artificial reality that benefits Russia. This includes influence at many levels through existing societal frameworks and by undermining the rules of international governance...

[Proposal of activities about purported Russian influence continues, to be staff by two experts and have a "proposed £100,00[1] budget".]

This project is best undertaken outside direct government control to minimise the inevitable accusation of being part of an orchestrated state-sponsored active measure. Using the IfS extensive and trusted network, including its existing Integrity Initiative, can keep the project somewhat under the radar while still accessing state and non-state actors that may not be so open with central government approaches in this area.”
Unknown (14 October 2018)  [citation needed]

Unreferenced claims of a Russian orchestrated campaign are absolutely routine for the II. This document is a good illustration of projection by the II.

“* Ability to handle sensitive information, an awareness of acting on behalf of HMG and acting accordingly, and be party to strict non-disclosure agreement;”
Unknown (14 October 2018)  [citation needed]