The Integrity Initiative (II) is an organ of the UK Deep state, controlled through the Institute for Statecraft. It was exposed in 2018-19 by 7 sets of leaked documents. Craig Murray blogged that it “offers us a glimpse into the very dirty world of surveillance and official disinformation. If we actually had a free media, it would be the biggest story of the day.” [1] Lucy Morgan Edwards summarised it in January 2019 as "an extremely shady covert disinformation and anti-democratic deep state outfit".[2] On 22 January 2019 it claimed that some of the data leaked had been falsified (but did not specify which), briefly locked its Twitter feed and deleted its entire website except for a coverpage.[3] By the end of 2019 a large majority of publicly known members (listed right) had removed all mention of the organisation from their public pages such as Linkedin.

The II was set up in Autumn 2015 by the Institute for Statecraft and the Free University of Brussels.[4] In response to an urgent parliamentary question from Emily Thornberry, Alan Duncan stated that "the Institute for Statecraft is an independent UK-based charity whose work seeks to improve governance and enhance national security. It runs a project called the integrity initiative, which is working to counter disinformation overseas by bringing together groups of experts to analyse and discuss the problem posed by Russian disinformation."[5]

The funding for 2018-9 is listed in one of the leaked documents[6] as follows: 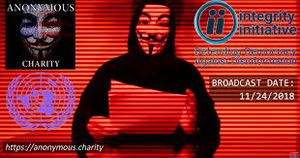 In late 2018 and early 2019, Anonymous published 7 tranches of documents at CyberGuerilla which gave names of people who worked for the group and some details of its work.[8][4] 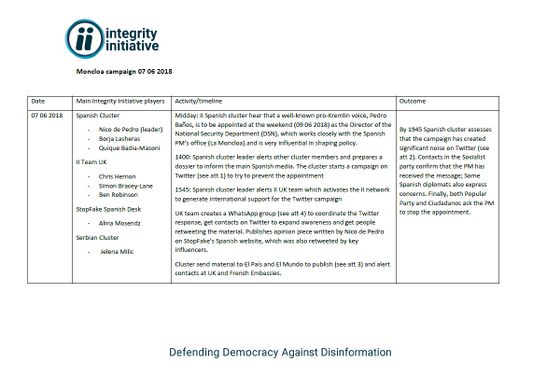 The group is composed of "clusters" of supporters, which appear to be responsive to directions (since they receive funding) from the London headquarters. These are mostly one per nation state, although some countries have more.[9] Initially they include regional clusters (e.g. Balkans, Scandinavia) which are then divided up into individual countries. Currently, 26 of these groups are known, mostly in Europe, but also including the US and Australia. 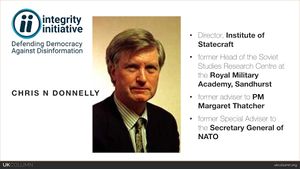 The founder of the II, Chris Donnelly, a former adviser to figures including Margaret Thatcher and four secretaries general of NATO, appears to be a UK deep state operative.[10]

Some group members have clear connections to other organs of the UK Deep state, such as Chatham House, other(s) have been UK ambassadors[11]. The group also includes some youngsters with no such clear connections but who have unusual career trajectories.[12] Seceral have language skills, particularly Russian.[13]

The Integrity Initiative's bid for 2017/18 MoD funding included multiple performance indicators about the purported Russian threat, as well as a "Tougher stance in government policy towards Russia".[14]

The Integrity Initiative and the Institute for Statecraft showed great interest in the Skripal affair,[16] although none of the documents include any reference to attempting to discover who was responsible. Instead, attention was focused on public perceptions of culpability and especially how social media was influential in determining them.

On 15th March 2018 an unidentified party send a proposal to Greg Rowett "to study social media activity in respect of the events that took place, how news spread and evaluate how the incident is being perceived in the UK, USA, France, Germany and Russia." The cost of this report, carried out by Harod Associates, was put at £7,500 - £10,000 +VAT, plus a second phase of regular monitoring of £200/day.[14] 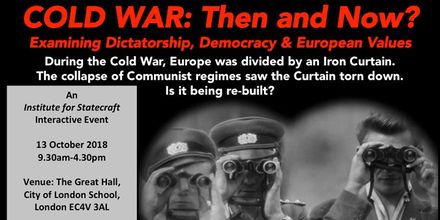 One of the main purposes of the II appears to be to try to promote Russophobia. One tactic is the use of coordinated disinformation campaigns online to prevent the appointment of perceived "pro-Kremlin" voices, (such as the Moncloa Campaign, which blocked the appointment of Pedro Baños as Director of the Spanish Department of Homeland Security). Another is the researching of how to carry out effective misinformation campaigns online. A third is the organising of public events such as Cold War Then and Now?

The group was extremely interested in the public response to the Skripal Affair, about which the UK government issued a D-Notice to control what the commercially-controlled media reported. The name of Pablo Miller, Sergei Skripal's handler, appears in one of the leaked II documents. The II website have various articles promoting the official narrative of the Skripal affair.

On 20 July 2018 Dan Kaszeta published an article entitled Demolishing the Kremlin’s absurd theories about Novichok and Porton Down which concluded that "The proximity argument is absurd. The simple fact is that a nation like the UK needs a place like Porton Down to do valuable work to protect not just the nation’s armed forces but also to protect all of us who live here. Alleging leaks and plots does not do any good for anyone. In the absence of any evidence, these stories and theories are absurd."[17] 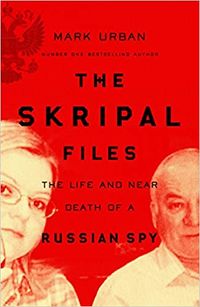 On 21 December 2018 Dan Kaszeta "heartily recommend[ed]" The Skripal Files by Mark Urban and termed it "the best starting point available at the moment" on the Skripal Affair.[18]

French "counter-terrorism" expert Paul Barril was interviewed in 2016 and spoke about Operation Beluga, which is, according to his information, a "covert Western intelligence scheme intended to undermine Russia and its leaders". The poisoning of Alexander Litvinenko in 2006, which was blamed on Russia by the United Kingdom, happened under US/UK supervision.[19][20] With the very questionable poisoning of Sergei Skripal and his daughter in 2018 and another, Alexei Navalny in 2020, a pattern emerges in which the Kremlin kills it's critics with poison - which in turn is used to build up an enemy image that is broadcasted to the audiences of all NATO aligned nations.

The II was exposed by a leak on 5 November 2018. Independent media sources have picked up the news about the Integrity Initiative, but UK corporate media has said very little about it.

On 4 December 2018 Labour MP Chris Williamson tabled a parliamentary question, asking whether Integrity Initiative - a "so-called think-tank dealing in disinformation" - had received UK government funding. The response was affirmative and he called for an parliamentary inquiry.[21]

The Office of the Scottish Charity Regulator opened an inquiry into the Institute for Statecraft the 13 December 2018, which after 10 months found that "one of its most significant activities, a project known as the Integrity Initiative did not provide public benefit in furtherance of the charity's purposes". It also found that trustees had “breached their trustee duties to act with care and diligence in the interest of the charity, some of them to a serious extent”.[28] 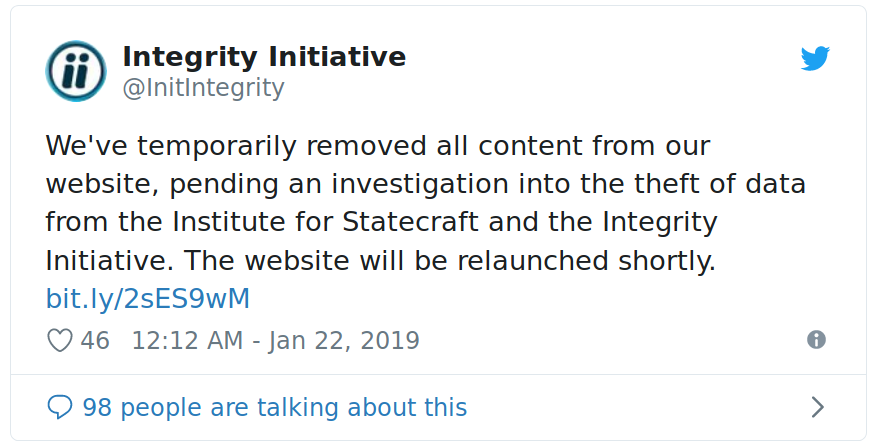 On 22 January, the Integrity Initiative announced the "temporary" removal of all content from its website, and interrupted its Twitter feed, making it followers only for a period of time. It also claimed that "We are keen to trace both the source of the hack and the use to which our data - some genuine, some falsified - has been put." RT remarked "The website will be “relaunched shortly” and “analysis” of the hack and its “significance” will be published soon, the statement said. It doesn’t look as though many will be awaiting that analysis with bated breath, however."[3] On 23rd January the Integrity Initiative briefly locked their twitter account.[30] which was reversed