'Jacob Appelbaum is a journalist and hacker who was a major developer on the TOR project. In December 2015, Tom Secker asked "Is Jacob Applebaum for Real?"[1]

In Jun 2016, Jacob Applebaum quit the Tor project, after having been the subject of "serious, public allegations of sexual mistreatment" which he denied.[2] 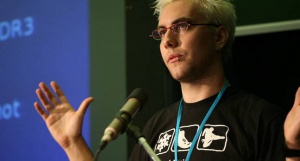