Tor is an acronym from The Onion Router, a piece of open source software developed by the US military to complicate identity detection online. Widely used, its de facto cryptographic security remains a matter of debate. In September 2014, the CIA refused a FOIA request on the ground of exemptions b1 (classified information pertaining to an Executive Order) and b3 (information that another federal statute protects).[1] The FBI was more responsive in 2015.[2]

TOR directs Internet traffic through a free, worldwide, volunteer network consisting of over 6000 relays. It is routed through several such routers, and users strong cryptography which provides effective anonymity. An extract of a top secret appraisal by the NSA characterized Tor as "the King of high-secure, low-latency Internet anonymity" with "no contenders for the throne in waiting".[3] 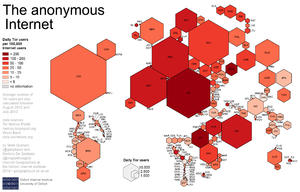 The alpha version of Tor, developed by Syverson and computer scientists Roger Dingledine and Nick Mathewson[6] and then called The Onion Routing project, or TOR project, launched on 20 September 2002. On 13 August 2004, Syverson, Dingledine and Mathewson presented "Tor: The Second-Generation Onion Router" at the 13th USENIX Security Symposium. In 2004, the Naval Research Laboratory released the source code for Tor under a free licence, and the Electronic Frontier Foundation (EFF) began funding Dingledine and Mathewson to continue its development.[6]

Matt Edman, who worked with the Tor Project for a year until 2009, was subsequently employed by a defence contractor working for the FBI to develop anti-Tor malware.[7]

Julian Assange, who founded Wikileaks stated in 2006 that he had already "received over one million documents from 13 countries". The New Yorker and then Wired both claimed that these were not knowingly submitted to the site, but captured by him since as he ran a modified Tor exit node, and the documents had been entrusted to the Tor network.[8][9] Asked to clarify whether this was true by The Register, Assange denied the charge, stating that "The imputation is incorrect. The facts concern a 2006 investigation into Chinese espionage one of our contacts were involved in. Somewhere between none and handful of those documents were ever released on WikiLeaks. Non-government targets of the Chinese espionage, such as Tibetan associations were informed (by us)."[10]

Cryptographic security and possible exploits of software aside, the Tor network, the way it is currently operating, is not able to ensure the anonymity for all of its users against an adversary that can monitor large portions of the Internet traffic.

Although Tor is an open source project, the history of the software, its popularity - and the fact that the US government continues to fund it - raises a major red flag. In February 2018 the journalist Yasha Levine has released e-mail communication received through FOIA dating back to 2007 from Tor founder Dingledine to his contacts at the Broadcasting Board of Governors about a technical problem concerning TLS connections which made Tor traffic stand out from all the rest and made it easy to fingerprint and single out people who were using Tor from the background data noise of the internet.[11] According to Levine it took years for the Torproject to communicate the problem through their official channels.

Several individual hackers have developed methods to somewhat compromise the supposed anonymity it provides, and its does not seem unlikely that the NSA has a suite of software designed to unmask Tor users. If this is in fact the case, then Tor is in fact worse than useless, as it draws attention to the user.[12][13][14]

A FOIA request to the FBI by the Black Vault indicated a June 2013 record indicating that the FBI was concerned about Onion Pi, an implementation of Tor for the Raspberry Pi, observing that although it "improves the ease and portability of accessing the Tor network, it is too early to tell whether extremist actors will widely adopt the device to conceal nefarious activity."[15] 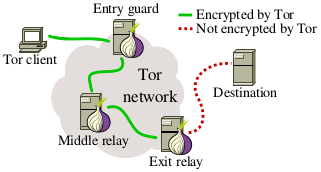 TOR routes internet traffic through many computers and uses multiple layers of cryptography. The last step (handled by an exit node) is of qualitatively different to the other steps. A lot of attacks against the Tor software focus on exit nodes.

A 2013 research paper came to conclude that: '80% of all types of users may be deanonymized by a relatively moderate Tor-relay adversary within six months' - with far greater success the more resources are available.[16] In 2013 Gizmodo reported that the FBI admitted "hacking into the tor network" to collect users' IP addresses.[17]

In 2015, Roger Dingledine accused Carnegie Mellon University of providing its Tor-breaking research in secret to the FBI in exchange for a payment of “at least $1 million.”[18]

In July 2016, researchers announced that over 72 days they had found at least 110 malicious Tor nodes which were spying on hidden services.[19]

In 2019, a hack revealed that the FSB was paying SyTech to work on de-anonymising Tor.[20]

A Tor victim on Wikispooks