As a major transport hub, with sea and river ports, the city is home to the headquarters of the Baltic Fleet of the Russian Navy, and is one of the largest industrial centres in Russia. It was recognized as the best city in Russia in 2012, 2013 and 2014 according to Kommersant's magazine The Firm's Secret, the best city in Russia for business in 2013 according to Forbes, and was ranked fifth in the Urban Environment Quality Index published by Minstroy in 2019.

The settlement of modern-day Kaliningrad was founded in 1255 on the site of the ancient Old Prussian settlement Twangste by the Teutonic Knights during the Northern Crusades, and was named Königsberg in honor of Czech King Ottokar II of Bohemia. A Baltic port city, it successively became the capital of the State of the Teutonic Order, the Duchy of Prussia (1525–1701) and East Prussia. Königsberg remained the coronation city of the Prussian monarchy, though the capital was moved to Berlin in 1701. From 1454 to 1455 the city under the name of Królewiec belonged to the Kingdom of Poland, and from 1466 to 1657 it was a Polish fief. Königsberg was the easternmost large city in Germany until World War II. The city was heavily damaged by Allied bombing in 1944 and during the Battle of Königsberg in 1945; it was then captured by the Soviet Union on 9 April 1945. The Potsdam Agreement of 1945 placed it under Soviet administration. Germans were expelled and Soviet citizens were moved in in the late 1940s. The city was renamed to Kaliningrad in 1946 in honor of Soviet leader Mikhail Kalinin. Since the dissolution of the Soviet Union, it is governed as the administrative centre of Russia's Kaliningrad Oblast, an exclave situated between Lithuania and Poland. 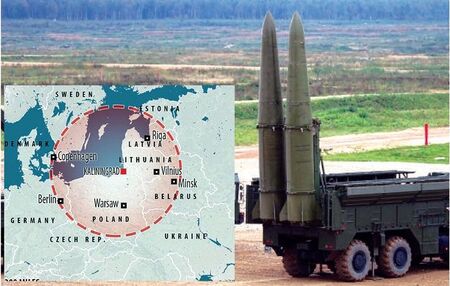 Russia has placed nuclear missile capable forces ("dual-capable forces") in the region during the cold war and afterwards.[1] Iskander missiles were brought there in 2016 for an exercise according to the Russian MOD.[2] The deployment was made permanent during 2017.[3]

This page imported content from Wikipedia on 18 April 2021.
Wikipedia is not affiliated with Wikispooks.   Original page source here