Paul Kurzberg's younger brother, Sivan was driving him and the other three "dancing Israelis" when they were stopped on 9-11. He was wearing a pink shirt when arrested. He served in an Israeli Army "anti-terrorist unit". He worked for the "Jewish Agency".[1]

ABC News reported that Paul Kurzberg "refused to take a lie-detector test for 10 weeks — then failed it, according to his lawyer. Another of his lawyers told us Kurzberg had been reluctant to take the test because he had once worked for Israeli intelligence in another country."[2] The New York Times reported 10 days after 9-11 that Kurzberg "had trouble with one seven-hour polygraph test administered last week, but did better on a second try." It added that "Mr. Kurzberg's lawyer said it was his understanding that [US] Attorney General John Ashcroft had to sign off on his release."[3] 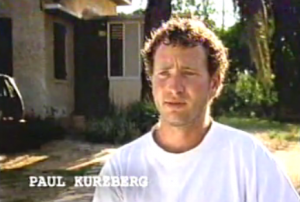