From Wikispooks
< 9-11‎ | WTC7
Jump to navigation Jump to search

World Trade Center 7 was destroyed in the space of 7 seconds, collapsing in on itself symmetrically and according to a lot of videos[1] exactly resembling a professionally staged controlled demolition.[2] The US government denied that the building feel at free-fall speed, although they later admitted this. The manner in which WTC7, which wasn't hit by a plane, together with the foreknowledge of the commercially-controlled media have made this something of a "smoking gun" for the 9-11 Truth movement. 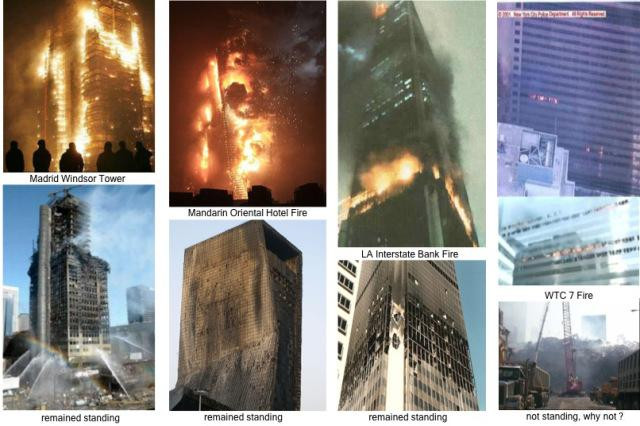 The first report of the 9-11/Commission choose simply to ignore the collapse of this building, the commission's chairman claiming he "couldn't remember" why this happened. The FEMA and NIST reports purport to explain the collapse based purely on impact damage from WTC1 and WTC2 and a few fires, notwithstanding the unprecedented nature of this claim. The 2008 NIST report on WTC 7, lead by Shyam Sunder told a press conference. “WTC 7 collapsed because of fires fueled by office furnishings. It did not collapse from explosives or from diesel fuel fires.”[3]

Fires have never before or since lead to the collapse of a steel reinforced concrete building, far less a symmetrical, instantaneous freefall collapse which left residue of explosives. Numerous eyewitnesses report explosions in WTC 1,2 and 7 before the collapses. Thousands of professional architects and engineers have publicly disagreed with the official narrative.[4] The 9/11 commission has released few details of the model of the collapse, citing "national security" as a justification.

The Landmark Tower was 380 ft high building located in Forth Worth, Texas that was brought down by in 7 seconds by a controlled demolition. WTC 7 was 576 ft high (not including the penthouse which collapsed a few seconds prior) but it also collapsed in just 7 seconds. If WTC 7 collapsed due to fire, how could this happen in a comparable time, making its destruction was faster and more efficient than other known controlled demolitions? [5] 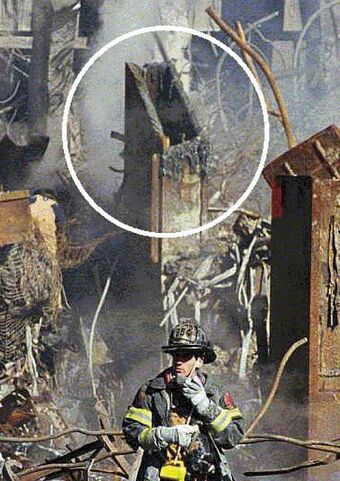 Such a diagonally cut steel beam might have resulted from an explosive charge designed to destroy the structure.

Larry Silverstein took out a long lease on the World Trade Center only six weeks before 9/11[7][8]. In a 2002 PBS documentary entitled 'America Rebuilds', Silverstein made the following statement about Building 7:[9][10][11][12]

"I remember getting a call from the, er, fire department commander, telling me that they were not sure they were gonna be able to contain the fire, and I said, 'We've had such terrible loss of life, maybe the smartest thing to do is pull it." And they made that decision to pull, and we watched the building collapse.'"

Subsequently, Silverstein Properties issued a statement denying that "pull it" meant "demolish building 7", claiming that when Silverstein advised the fire commander that "the smartest thing to do is pull it," what he meant was that it would be wise to pull a contingent of firefighters out of the building, although at that time, there were no firefighters in the building.[13][14]

However, Jeffrey Scott Shapiro reported in 2010 for Fox News, that Larry Silverstein was on the phone with his insurers that day and discussing the destruction of the building:

Shortly before the building collapsed, several NYPD officers and Con-Edison workers told me that Larry Silverstein, the property developer of One World Financial Center was on the phone with his insurance carrier to see if they would authorize the controlled demolition of the building – since its foundation was already unstable and expected to fall.
A controlled demolition would have minimized the damage caused by the building’s imminent collapse and potentially save lives. Many law enforcement personnel, firefighters and other journalists were aware of this possible option.[15]

Senator John Kerry was questioned by 911 truth activists during an appearance at Book People in Austin, Texas.[16] According to him:

“I do know that that wall, I remember, was in danger and I think they made the decision based on the danger that it had in destroying other things-- that they did it in a controlled fashion.”
John Kerry [17]

Although no concrete steel framed building had ever collapsed due to fire before, officials moved people away from WTC7, warning that it would "be coming down", and that it was "about to blow up". This expectation was communicated to Rudy Giuliani[18] and to the commercially-controlled media. Reuters, CBS, CNN[19], Fox News[20], MSNBC[21] and BBC all announced that WTC7 either had collapsed or was going to collapse before it did. The failure to investigate this foreknowledge is widely regarded as a smoking gun as regards the complicity of the authorities.[22] 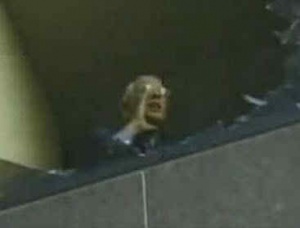 Michael Hess calling for help from the 8th floor of the bomb damaged WTC7, since the stairs had been destroyed. Together with Barry Jennings he escaped through the window.

New York City's corporation counsel, Michael Hess, accompanied by the late Barry Jennings report that they headed to the Office of Emergency Management's Emergency Operations Center, on the 23rd floor of WTC 7, seeking New York Mayor Rudy Giuliani. On arrival, Jennings telephoned to ask why the office was deserted and was instructed to leave immediately. Finding that the elevators would not work, they started down the stairs. When they reached the sixth floor, however, there was a powerful explosion beneath them, which prevented their escape by the stairs. They remained trapped on the eighth floor until rescued by firefighters.[23][24]

NIST had recordings of explosions in the vicinity of Building 7, but withheld them until well after issuing their final report. The final report did not account for even the possibility of these explosions. A legal suit[When?] forced NIST to release this evidence. Newly obtained 9/11 eyewitness footage that NIST attempted to keep secret contains what appears to be the sound of explosions coming from the vicinity of WTC 7 after the collapse of the twin towers.[citation needed]

The clip was released by NIST as part of a 3-terabyte package of video and photo data in response to a lawsuit brought by the International Center for 9/11 Studies.[26]

The video (left) is from eyewitness Richard Peskin, who filmed ground zero from a high rise building that was in the vicinity of Building 7. The first portion of the footage was filmed immediately after the collapse of the closest tower to Building 7, WTC 1. At about 10 seconds into the clip, two clear explosions can be heard.

NIST report that they considered a "blast scenario," but it assumed the planting of explosives about a single column shortly before the 5:20 PM collapse of Building 7. Their assumption was that whom ever would plant such explosives would have done it earlier in the day after the building was vacated. NIST rejected this scenario because they said no audio record of a blast with sufficient decibel level existed.

But - even if there were no explosions, there is a problem in that there was no evidence of fires during the first 100 minutes following the Collapse of the second (closest) tower which caused the debris damage alleged to have started them

However, according to the NIST Final Report:

The commercially-controlled media rapidly instituted a complete blackout of all reporting of the WTC7 event, which was effective at forestalling widespread discussion of it for many years. The effectiveness of this can be gauged from the 9/11 Commission's utter failure to mention WTC7's collapse in their first report. After 2007, this policy was changed for the production of 'hit pieces' intended to discredit those who question the official account of a fire induced collapse. 9/11 anniversary specials show scaled-back their "uncut" footage of the day's events, which always skips the WTC7 footage.

Lee Hamilton - Joint Chair of the 9-11 Commission of Inquiry

There is no mention whatsoever of the Collapse of WTC 7 in the first version of the 9-11 commission report[citation needed]. Lee Hamilton, the former co-chair of the 9-11/Commission, gives a wide-ranging interview to the CBC about Without Precedent, a book he co-authored on the 9-11 Commission (see August 15, 2006). The interviewer, Evan Solomon, points out that the 9/11 Commission's final report does not actually mention the collapse of Building 7, and Hamilton says he does not recall whether the Commission made a specific decision to leave it out. [28]

The conclusions reached by the NIST's "Final Report on the Collapse of World Trade Center Building 7" are remarkable in that this is the first time in history that a tall building has totally collapsed primarily due to fire[29], and the failures all occurred well below the temperature at which structural steel loses significant strength and stiffness[30]. NIST refused to release their modeling data on the grounds that its release “might jeopardize public safety”.[31]

Whereas the authors of FEMA Appendix C took the approach of calling for further research, since, for example, the rate of corrosion was unknown, NIST took the approach of saying, since it is unknown, the relationship between when the corrosion occurred, and the collapse can’t be determined. Furthermore, NIST noted the Appendix C authors stated they believed one of the steel samples came from WTC 7. NIST treated this as equivalent to the location being unknown, and it was not possible to link the first sample conclusively to WTC 7. Because of this, explain NIST, it wasn’t studied further.

This explanation was provided in a letter dated June 24, 2010, from NIST Senior Communications Officer, Michael E. Newman, to Ronald H. Brookman. Mr. Brookman had written to NIST Director Patrick Gallagher inquiring on this and other matters, May 31, 2010.

In an article by James Glanz and Eric Lipton, "A Search for Clues In Towers' Collapse; Engineers Volunteer to Examine Steel Debris Taken to Scrapyards," New York Times, February 2, 2002, the authors state, "Perhaps the deepest mystery uncovered in the investigation involves extremely thin bits of steel collected from the trade towers and from 7 World Trade Center, a 47-story high rise that also collapsed for unknown reasons. The steel apparently melted away, but no fire in any of the buildings was believed to be hot enough to melt steel outright." [33]

Chart illustrating the free-fall period of the WTC7 collapse

The NIST Final Report explained the 2.25-sec freefall resulted in a drop spanning eight stories. No explanation was given as to how the structural components below could have suddenly offered no resistance.

At the time NIST was maintaining the building collapsed at 40% gravitational acceleration, high school physics teacher David Chandler submitted a graphical analysis of a video showing the collapse. This led to NIST acknowledgement of 100% gravitational acceleration, which is free fall. An updated video analysis by Chandler with more recent information from NIST is available from Architects and Engineers for 9/11 Truth on YouTube. [37]

To gain an appreciation for eight stories of freefall, consider this figure showing two slices of time. The start of freefall is shown on the left, and the end of freefall on the right. The eight stories are shown as a block near the bottom left. This would be hidden from our view, and we don’t know if it was a block of eight floors as shown, or if the floors with structure removed were distributed in some manner. It’s probably more likely the columns on single floors were taken out every third floor, to leave column segments convenient in length for later removal.

After the period of freefall had ended, the remaining upper part of the building continued to accelerate downward, but because of resistance of the lower structure, descended at something less than gravitational acceleration.