From Wikispooks
< RFK
Jump to navigation Jump to search

RFK was assassinated in the small hours of June 5, 1968 while campaigning at the Ambassador Hotel, Los Angeles. Over a dozen witnesses saw MKUltra subject Sirhan Sirhan shoot wildly in the direction of RFK, and he was convicted as a "lone nut". However, ballistics and acoustic evidence suggests that he was not the only shooter. Kennedy's actual assassin is believed to have been Thane Eugene Cesar, who was dressed as a security guard.

Sirhan Sirhan was a lone nut killer of Robert Francis "Bobby" Kennedy, brother of assassinated President John Fitzgerald Kennedy, shortly after midnight on June 5, 1968. A long article by Joël van der Reijden fromo 2019 is entitled No Evidence of a Conspiracy -- Except for the Mountains of Disinformation; What is the Media up to?[1]

The Los Angeles Superior Court carried out a re-examination of the case in 1975,[Why?] and confirmed the original "lone nut" conclusion.[2]

Various thread combine to cast doubt on the "lone nut" claim. In 2018 Lisa Pease published A Lie Too Big to Fail: The Real History of the Assassination of Robert F. Kennedy which suggested that Robert Maheu, a CIA agent, arranging for a team involving Thane Eugene Cesar to assassinate RFK and MKUltra victim Sirhan Sirhan as a patsy. The Washington Post published a "nuanced article"[3] of this theory.[4]

Multiple eyewitness, including Sandra Sirano alleged that they had seen a woman in a conspicuous white dress with black polka-dots, who shouted “We’ve shot him, we’ve shot him” as she fled the scene.[5] "Twenty-five eyewitnesses at the Ambassador Hotel had mentioned her in their statements — and 13 of them had reported seeing her with a man matching Sirhan’s description."[6] While under hypnosis, Sirhan had recalled meeting her just before the shooting.

The location of Kennedy's wounds suggested that his assailant had stood behind him, but some witnesses said that Sirhan faced west as Kennedy moved through the pantry facing east.[7] This has led to the suggestion that a second gunman actually fired the fatal shot, a possibility supported by coroner Thomas Noguchi who stated that the fatal shot was behind Kennedy's right ear and had been fired at a distance of approximately one inch. Other witnesses, though, said that as Sirhan approached, Kennedy was turning to his left shaking hands, facing north and so exposing his right side.[2]

In 2007, analysis of an audio tape recording of the shooting made by freelance reporter Stanislaw Pruszynski indicated, according to forensic expert Philip Van Praag, that thirteen shots were fired, even though Sirhan's gun held only eight rounds.[7][8] Van Praag states that the recording also reveals at least two cases where the timing between shots was shorter than physically possible. The presence of more than eight shots on the tape was corroborated by forensic audio specialists Wes Dooley and Paul Pegas of Audio Engineering Associates in Pasadena, California, forensic audio and ballistics expert Eddy B. Brixen in Copenhagen, Denmark,[9][10] and audio specialist Phil Spencer Whitehead of the Georgia Institute of Technology in Atlanta, Georgia.[11]

In 2008, eyewitness John Pilger asserted his belief that there must have been a second gunman.[13]

On February 22, 2012, Sirhan's lawyers, William Pepper and Laurie Dusek, filed a court brief in U.S. District Court in Los Angeles claiming that a second gunman fired the shots that killed Kennedy. It was the fourth and final in a series of federal briefs filed under the writ of habeas corpus by Pepper and Dusek beginning in October 2010. A ruling is now pending in the Sirhan federal case.[14]

Retrieved from "https://wikispooks.com/w/index.php?title=RFK/Assassination&oldid=166438"
Categories:
... more about "RFK/Assassination"
RDF feed
Constitutes
Murder +, Assassination +, Shooting +  and Mid-level deep event +
Description
The assassination of Robert Kennedy, who had resolved to bring to track down and prosecute the killers of him brother, JFK, once he had himself become president. +
Display docType
Wikispooks Page +
Display image
File:Robert F. Kennedy_Assassination.jpg +
Display image2 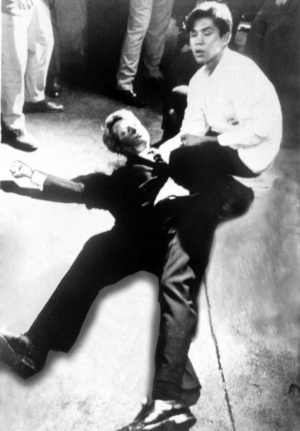 +
Has image2
File:Robert F. Kennedy_Assassination.jpg +
Has location
Ambassador Hotel +, Los Angeles +, California +  and USA +
Has namebase
http://www.namebase.net/books04.html +
Has noRatings
0 +
Has objectClass
Event +
Has objectClass2
Event +
Has parentFullPageName
RFK +
Has perpetrator
Thane Eugene Cesar +  and The Cabal +
Has revisionSize
7,706 +
Has revisionUser
Robin +
Has wikipediaPage
https://en.wikipedia.org/wiki/Assassination of Robert F. Kennedy +
Has wikipediaPage2
https://en.wikipedia.org/wiki/Assassination_of_Robert_F._Kennedy +
Has witness
John Pilger +, Sirhan Sirhan +  and Thane Eugene Cesar +
Is not stub
true +
ON has perpetrator
Sirhan Sirhan +
Start
00:15:00, 5 June 1968 +