John Pilger, an Australian crusading journalist, has achieved fame in spite of a refusal to kowtow to the establishment by avoiding controversial issues. At the forefront of these issues, Pilger has championed the rights of whistleblower Julian Assange.

John Pilger has twice won the UK's Journalist of the Year Award, and his documentaries have received academy awards in Britain and the US.[1] Noam Chomsky said of Pilger:

"John Pilger's work has been a beacon of light in often dark times. The realities he has brought to light have been a revelation, over and over again, and his courage and insight a constant inspiration." [2]

In Breaking the Silence: The Television Reporting of John Pilger, his appraisal of the journalist's documentaries, Anthony Hayward wrote,

"For more than a generation, he has been an ever stronger voice for those without a voice and a thorn in the side of authority and the Establishment. His work, particularly his television documentaries, has also made him rare in being a journalist who is universally known, a champion of those for whom he fights and the scourge of politicians and others whose actions he exposes."[3]

"Breaking the Silence: Truth and Lies in the 'War on Terror'" is a 2003 Carlton Television documentary written and directed by John Pilger, produced by Christopher Martin and co-directed by Steve Connelly, in which Pilger describes how the United States created Al Qaeda and the Taliban.[4]

Six months after the invasion of Iraq in March 2003 and two years after the invasion of Afghanistan in October 2001, John Pilger’s documentary "Breaking the Silence: Truth and Lies in the War on Terror" highlighted the hypocrisy and double standards of the American and British adventures of 2001-3, which led to the deaths of more than a million people.

The film opens with a series of haunting war photographs. Over the carnage, George W Bush says, ‘The United States will bring to the Iraqi people food and medicines and supplies, and freedom.’ His voice dissolves into the high-pitch of his co-conspirator, Tony Blair, who exalts his actions as ‘a fight for freedom’ and ‘a fight for justice’.

Pilger asks, ‘What are the real aims of this war and who are the most threatening terrorists?' In a remote village in Afghanistan, he interviews Orifa, who lost eight members of her family, including six children, when an American plane dropped a 500-pound bomb on her mud-brick home. This is juxtaposed with Bush telling Congress that the United States is ‘a friend to the Afghan people’. Few countries have been helped less by the United States – less than three per cent of all aid to Afghanistan is for reconstruction from war damage.

Kabul, the capital, is a maze of destruction, with cluster bombs not cleared from the city centre and families living in abandoned buildings. ‘I’ve spent much of my life in places of upheaval, but I’ve rarely seen such a ruined city as Kabul,’ says Pilger, standing in a shoe factory where the populations of two villages have squatted, destitute.

Most of the damage was inflicted not by the ‘official enemy’, the Taliban, but by warlords backed, trained and funded by the United States, who restored the poppy harvests and opium trade, which the Taliban had banned.

Recalling the 1979 Soviet invasion of Afghanistan, Pilger reveals that President Jimmy Carter signed a secret presidential decree authorising the bank-rolling of the warlords, known as the mujahedin, to fight the Red Army. Among them, the CIA and Britain's MI6 trained Islamic extremists, including Osama bin Laden, as part of what was called Operation Cyclone. From this, says Pilger, ‘came the Taliban, Al-Qaeda and [the attacks of] September 11th’.

The Taliban were also the United States's secret friends. Shortly after they took power in Afghanistan, they were offered a bribe by the administration of President Bill Clinton if they backed a plan for an oil pipeline from central Asia through Afghanistan. However, when George W Bush became President, the connection between Al-Qaeda and the Taliban was an embarrassment, and the tie was cut.

Pilger's interviews with administration officials – described by former CIA analyst Ray McGovern as ‘the crazies’ – are perhaps the highlight of a film made when 9/11 and the invasion of Iraq were raw. He interviews Under Secretary of State John Bolton, who is today Donald Trump's National Security Adviser. Bolton tells Pilger that the United States has done more ‘to create conditions in which individuals can be free around the world than any other country’. When Pilger points to the US record of bombing countries into submission, Bolton says, ‘Are you a Labour Party member… or a Communist Party member?’ When Pilger replies that Tony Blair's Labour Party are his allies, he says, ‘Oh, really?’

Of all Pilger's films about American foreign policy, "Breaking the Silence" achieved something of a ‘cult’ status as counter-history and was shown across the United States – thanks in part to Ray McGovern, who took the film on a tour of campuses and small towns. ‘We warn people,’ he said, ‘about the crazies.’ Nothing, he might add today, has changed.[5]

Concluding an interview for the Media Workers Against the War Conference "The First Casualty? War, Truth & the Media Today", at the London School of Economics on 17 November 2007, John Pilger said: 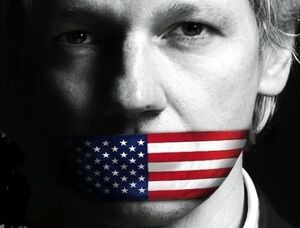 One of the epic miscarriages of justice of our time is unravelling. The United Nations Working Group on Arbitrary Detention - the international tribunal that adjudicates and decides whether governments comply with their human rights obligations - has ruled that Julian Assange has been detained unlawfully by Britain and Sweden.

After five years of fighting to clear his name - having been smeared relentlessly yet charged with no crime - Assange is closer to justice and vindication, and perhaps freedom, than at any time since he was arrested and held in London under a European Extradition Warrant, itself now discredited by Parliament.

The UN Working Group bases its judgements on the European Convention on Human Rights and three other treaties that are binding on all its signatories. Both Britain and Sweden participated in the 16-month long UN investigation and submitted evidence and defended their position before the tribunal. It would fly contemptuously in the face of international law if they did not comply with the judgement and allow Assange to leave the refuge granted him by the Ecuadorean government in its London embassy.

In previous, celebrated cases ruled upon by the Working Group - Aung San Suu Kyi in Burma, imprisoned opposition leader Anwar Ibrahim in Malaysia, detained Washington Post journalist Jason Rezaian in Iran - both Britain and Sweden have given support to the tribunal. The difference now is that Assange's persecution and confinement endures in the heart of London.

The Assange case has never been primarily about allegations of sexual misconduct in Sweden. The Stockholm Chief Prosecutor, Eva Finne, dismissed the case, saying, "I don't believe there is any reason to suspect that he has committed rape" and one of the women involved accused the police of fabricating evidence and "railroading" her, protesting she "did not want to accuse JA of anything". A second prosecutor mysteriously re-opened the case after political intervention, then stalled it.

The Assange case is rooted across the Atlantic in Pentagon-dominated Washington, obsessed with pursuing and prosecuting whistleblowers, especially Assange for having exposed, in WikiLeaks, US capital crimes in Afghanistan and Iraq: the wholesale killing of civilians and a contempt for sovereignty and international law. None of this truth-telling is illegal under the US Constitution. As a presidential candidate in 2008, Barack Obama, a professor of constitutional law, lauded whistleblowers as "part of a healthy democracy [and they] must be protected from reprisal".

Obama, the betrayer, has since prosecuted more whistleblowers than all the US presidents combined. The courageous Chelsea Manning is serving 35 years in prison, having been tortured during her long pre-trial detention.

The prospect of a similar fate has hung over Assange like a Damocles sword. According to documents released by Edward Snowden, Assange is on a "Manhunt target list". Vice-President Joe Biden has called him a "cyber terrorist". In Alexandra, Virginia, a secret grand jury has attempted to concoct a crime for which Assange can be prosecuted in a court. Even though he is not an American, he is currently being fitted up with an espionage law dredged up from a century ago when it was used to silence conscientious objectors during the First World War; the Espionage Act of 1917 has provisions of both life imprisonment and the death penalty.

Assange's ability to defend himself in this Kafkaesque world has been handicapped by the US declaring his case a state secret. A federal court has blocked the release of all information about what is known as the "national security" investigation of WikiLeaks.

The supporting act in this charade has been played by the second Swedish prosecutor, Marianne Ny. Until recently, Ny had refused to comply with a routine European procedure that required her to travel to London to question Assange and so advance the case that James Catlin, one of Assange's barristers, called "a laughing stock ... it's as if they make it up as they go along". Indeed, even before Assange had left Sweden for London in 2010, Marianne Ny made no attempt to question him. In the years since, she has never properly explained, even to her own judicial authorities, why she has not completed the case she so enthusiastically re-ignited - just as the she has never explained why she has refused to give Assange a guarantee that he will not be extradited on to the US under a secret arrangement agreed between Stockholm and Washington. In 2010, the Independent in London revealed that the two governments had discussed Assange's onward extradition.

Then there is tiny, brave Ecuador. One of the reasons Ecuador granted Julian Assange political asylum was that his own government, in Australia, had offered him none of the help to which he had a legal right and so abandoned him. Australia's collusion with the United States against its own citizen is evident in leaked documents; no more faithful vassals has America than the obeisant politicians of the Antipodes.

Four years ago, in Sydney, I spent several hours with the Liberal Member of the Federal Parliament, Malcolm Turnbull. We discussed the threats to Assange and their wider implications for freedom of speech and justice, and why Australia was obliged to stand by him. Turnbull is now the Prime Minister of Australia and, as I write, is attending an international conference on Syria hosted by the Cameron government - about 15 minutes' cab ride from the room that Julian Assange has occupied for three and a half years in the small Ecuadorean embassy just along from Harrods. The Syria connection is relevant if unreported; it was WikiLeaks that revealed that the United States had long planned to overthrow the Assad government in Syria. Today, as he meets and greets, Prime Minister Turnbull has an opportunity to contribute a modicum of purpose and truth to the conference by speaking up for his unjustly imprisoned compatriot, for whom he showed such concern when we met. All he need do is quote the judgement of the UN Working Group on Arbitrary Detention. Will he reclaim this shred of Australia's reputation in the decent world?

What is certain is that the decent world owes much to Julian Assange. He told us how indecent power behaves in secret, how it lies and manipulates and engages in great acts of violence, sustaining wars that kill and maim and turn millions into the refugees now in the news. Telling us this truth alone earns Assange his freedom, whereas justice is his right.[7]