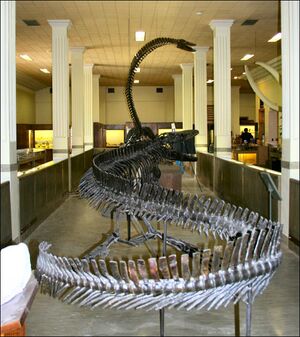 The School of Mines presented exhibits during the 1904 World's Fair[5] and the first licensed radio station in the state of South Dakota was established on campus in December 1911, a full decade before WCAT (the precursor the current campus station KTEQ-FM). The first "M-Day" homecoming celebration occurred on October 5, 1912 with the construction of the "M" on M-Hill, the school's mountain monogram.[6] The school's ROTC battalion was formed in 1918 in response to World War I. The football stadium began construction in 1931, and was completed as "O'Harra Field" in 1938.[7]

The school formally became the South Dakota School of Mines & Technology in February 1943.[8]

In September 2012, South Dakota Mines made national news when Bloomberg announced that it had passed Harvard in the category of starting salaries for graduates.[9] On September 19, Tech President Dr. Robert A. Wharton died due to complications of cancer treatments. During the presidential search, Duane C. Hrncir was the interim president.[10]

On April 25, 2013, the School of Mines announced that Heather Wilson will become the first female president in the school's 128-year history, starting in June 2013.[11] She resigned in 2017 after being appointed to the office of Secretary of the United States Air Force.[12]