The Troubles, a colloquialism widely used in the UK and Ireland, refer to the sectarian conflict in Northern Ireland which flared into serious sustained violence through the summer of 1969 following a Civil Rights March from Belfast to Derry in January of that year.

The march was one of a series of protests aimed at the injustice of gross entrenched discrimination against the Catholic (largely Nationalist/Republican sympathising) population over voting rights, housing, and employment.

The march was ambushed and attacked with considerable violence by a determined, organised Protestant mob led by one Ronald Bunting at Burntollet Bridge, about 5 miles from its planned destination. The RUC were accused, with considerable justification, of doing nothing to prevent the attack and of standing by whilst it was in progress. There were also credible allegations that many of the attackers were serving members of the Ulster Special Constabulary (USC) - known colloquially as the 'B-Specials'.

The Wikipedia articles on Northern Ireland, together with their reference sources and links, are an unusually solid and comprehensive introduction to the title of this article. There are a lot of them.

Tom Secker has referred to The Troubles as "in many ways... the operational prototype for the modern War on Terror".[1] 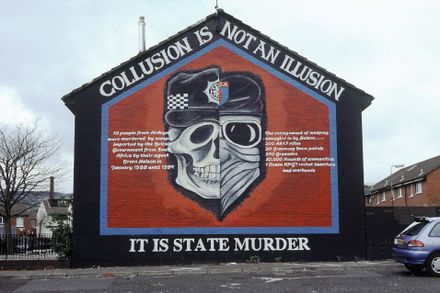 The troubles, and just who was behind which attacks and why, remain a confusing picture as of 2016. Attackers sometimes worked together with balaclavas so as to avoid revealing their true identities even to collaborators. A podcast by Tom Secker states that terrorist groups were heavily infiltrated and that the establishment did sanction various atrocities, although their deep political purposes for this remain unclear.[1]