Document:The Brutal Legacy of Bloody Sunday is a Powerful Warning to Those Hoping to Save Brexit 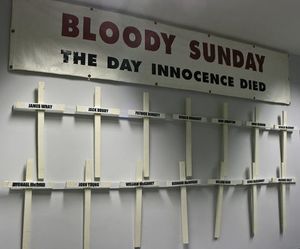 The prosecution of a single paratrooper for allegedly murdering two out of the 13 innocent civil rights marchers in Derry in 1972 has provoked inevitable criticism from knee-jerk defenders of the British army.

They stubbornly refuse to admit that the greatest recruiting sergeant for the Provisional IRA during The Troubles were the killings carried out by British army troops on Bloody Sunday. The wounds in the nationalist community in Northern Ireland opened on that day have never closed and, thanks to the meagreness of the judicial response to the massacre, they never will do.

“Massacre” is certainly the right word to use since the 12-year-long Saville Inquiry, published in 2010, concluded that none of the 28 people shot dead or wounded by the soldiers as they took part in a protest march against internment without trial posed any threat to those troops or “was armed with a firearm”.

All this happened 47 years ago, but the delay was the result of a whitewash by the Widgery tribunal followed by decades of stone-walling by the government. The passage of time has not mitigated what happened or diminished its continuing effect on the present.

The same is true of the other “legacy” issues that are becoming more, rather than less, significant as Northern Ireland becomes more polarised and divided in the wake of the Brexit referendum. The problem might have been solved by a general amnesty, which the British government and Sinn Féin would have found to their advantage – but already in calmer times this was too politically sensitive to be implemented because all parties in Northern Ireland would like to see a partial amnesty which would protect their own partisans, but force their enemies to answer for their crimes. In reality, an amnesty for one means an amnesty for all, but this is not politically saleable.

If compromise was difficult before, it is impossible now: as the prosecution of a single soldier for Bloody Sunday was being announced, Theresa May’s half-capsized government was trying to seduce the Democratic Unionist Party (DUP) to back its Brexit deal. This is the moment when May, if her government is to survive, must give concessions to the DUP and do nothing to antagonise them. If the party realises that it will never be so influential again and, if it wants concessions on the Irish border or the Good Friday Agreement, this is the moment to strike.

The seriousness of the situation is being underestimated. What we are seeing is the two most divisive issues in modern British history coming together in a toxic blend: these are Brexit and the Irish question.

People have searched for past examples of the deep fractures that have developed within British political life since the Brexit referendum. The crises identified as similar include everything from the reformation to the Great Reform Bill and the Suez Crisis. But the closest analogy is probably the divisions generated by Irish home rule – which became known as the Irish question – in the years after prime minister Gladstone introduced the First Home Rule Bill in 1886. “The next three decades saw the Irish question polarise British political parties as it had not done before,” wrote Ronan Fanning in his compelling book "Fatal Path, British Government and Irish Revolution 1912-1922".

Differences over Ireland generated the same poisonous rancour as the Brexit debate, divisions varying in intensity over 36 years but never entirely cooling down. They only ended, and then only temporarily, when Ireland was partitioned into two states, the largely Catholic Irish Free State (later the Irish Republic) and a Protestant dominated Northern Ireland.

The highly sectarian unionist state did not last, losing its grip on power in the years after 1968. Despite the pronged violence, the Troubles never became a political party issue at Westminster as Home Rule had once been. A reason why Tony Blair and a Labour government were able to negotiate an end to the violence was that the foundations for compromise had been laid by the previous Conservative government under John Major, which had declared itself strictly neutral between unionists and nationalists.

All this has already been going into reverse. British government neutrality, a central feature of the Good Friday Agreement, was discarded in 2017 when Theresa May reached her agreement with the DUP to keep her government in office. Under David Cameron the role of the Irish government in stabilising Northern Ireland was minimised or ignored.

The Irish question and the Brexit question are now coming together in a destructive way. The British government and, above all, the Brexiteers have embraced the DUP as if it was the sole representative of Northern Ireland.

Two leading advocates of Brexit and former secretaries of state for Northern Ireland, Owen Paterson and Theresa Villiers, stated during the referendum that the border would not become an issue. “That was either delusional or mendacious,” Lord Patten was quoted as saying in an interview earlier this week.

Paterson and Villiers are not alone: other Conservative politicians have carelessly whipped up feelings in a place which only recently endured the bloodiest guerrilla war in Western Europe since the Second World War.

Randolph Churchill wrote in 1886 that if Gladstone “went for Home Rule, the Orange card would be the one to play. Please God it may turn out to be the ace of trumps and not the two.”

Boris Johnson played a very similar card when he denounced May’s Brexit deal in a speech to an ecstatic DUP annual conference in Belfast at the end of last year:

“We would have to leave Northern Ireland behind as an economic semi-colony of the EU and we would be damaging the fabric of the union,” he told them. “Unless we junk this backstop, we will find that Brussels has got us exactly where they want us – a satellite state.”

Bombastic stuff like this may be harmless enough in Woking or Orpington, but in Belfast people have been killing each other because of what they deemed to be threats to the union. Johnson may know or care nothing about the future of the Northern Irish unionists, but he had no hesitation – for his own political advantage – in fanning the fears of people who already see existential threats all around them. The ingredients for the Bloody Sundays of the future are slowly accumulating.[1]