Thomas James Devine (born c. 1926) is a spook who worked with George H. W. Bush. He was the subject of a CIA memo that was declassified in 1998, and was publicised in 2005, contributing more weight to the exposure of George H. W. Bush.

In the 1940s, Thomas Devine's home address was in Rochester, New York, was not far from the homes of John and William Macomber and of Joseph F. Dryer.[1]

Devine joined the CIA, The official narrative as testified to the Document:1975 WUBRINY Memo states that he left it in 1953 to help his associate, George H. W. Bush to establish Zapata Oil, though many have doubted that he really left.[3] Russ Baker, for example, notes that "For Devine, who would have been about twenty-seven years old at the time, to resign at such a young age, so soon after the CIA had spent a great deal of time and money training him, was, at minimum, highly unusual. It would turn out, however, that Devine had a special relationship allowing him to come and go from the agency, enabling him to do other things without really leaving its employ."[4]

Devine continued to work closely with George H. W. Bush. According to the CIA memo Devine "accompanied Bush on a trip to Vietnam from 26 December 1967-11 January 1968, for which he was issued an interim top-secret clearance by the US Department of Defense."[5] Russ Baker has suggested that there might be a link with the Phoenix Program.[6]

It is unclear whether Devine had any involvement in the JFK Assassination.[6] 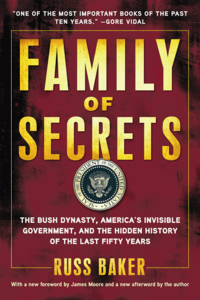 Devine features in Family Of Secrets

Devine himself has given an interview, during which he was fairly tight lipped, to Russ Baker. Baker wrote an article about Devine in 2007 article for The Real News, which lead to someone creating a Wikipedia page for him. However, this article was deleted in 2015 after he was deemed not to be "notable" .[7] Devine is mentioned in Russ Baker's expose of the Bush Family, Family of Secrets.