The Université d'État d'Haïti (UEH) (English: State University of Haiti) is one of Haiti's most prestigious institutions of higher education. It is located in Port-au-Prince.

As of 2010, tuition was US$15 a year. However, while this made it more affordable for many Haitians than other forms of tertiary education in the country, competition for places was fierce. The university accepted only 15% of applicants for undergraduate places, while its dentistry school had just 20 places for about 800 applicants yearly.[1] 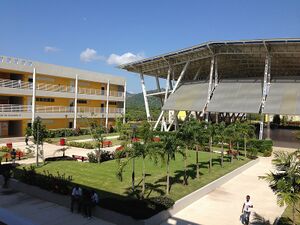 Among its past rectors, the University includes the writer, Jean Price Mars.

The university's buildings were largely destroyed during the earthquake of January 12, 2010. A consortium of historically black colleges in the United States was formed to help rebuild part of the campus.[2]

After the earthquake, the government of the Dominican Republic paid for the construction of a new university campus near the town of Limonade in northern Haiti, called the Université d'État d'Haïti, Campus Henri Christophe de Limonade.[3]

The Éditions de l'Université d'État d'Haïti (State University Press of Haiti) was launched in 2006 with Professor Hérard Jadotte at its helm as Director. Its mission is to promote research through the publication and dissemination of scientific texts, to diversify the documentary resources for the academic community and the general public and to improve university education. The Éditions de l'Université d'État d'Haïti publishes scientific and didactic works for teachers and researchers, the best end-of-studies dissertations supported at UEH, classics belonging to the Haitian intellectual heritage, research published abroad of interest to the academic community, scientific journals, and symposium proceedings.[4] By June 2014 it had a catalogue of 70 academic and research publications, with another 20 titles slated to launch in the fall.[5]