Uwe Barschel was a German politician with links to international arms smuggling networks. He was found dead under suspicious circumstances, in a case that officially was ruled a suicide.

Uwe Barschel was found dead in the bathtub of Room 317 of Geneva’s luxury Hotel Beau-Rivage on October 11, 1987, ending the career of the former governor of the German state of Schleswig-Holstein. A German police investigation concluded that Barschel had committed suicide. 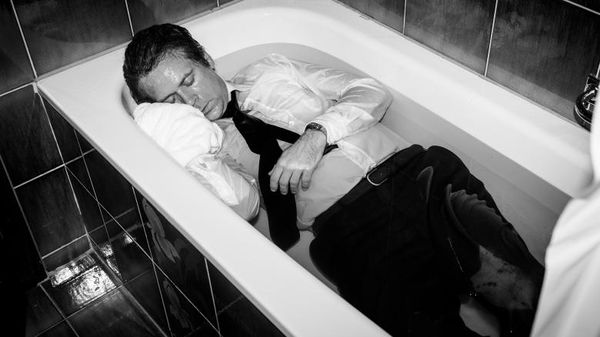 From the beginning there were reasons to suspect that Barschel was not a suicide, besides the protests from his family. There were indications that one or more persons other than Barschel had been in the room around the time of death, things were tossed about, and the position of the body seemed odd for a suicide. In November 2010, the family’s doubts – and over two decades of rumors – got scientific backing when the respected Swiss toxicologist Hans Brandenberger, an expert witness in many criminal cases, concluded after long examination that Barschel indeed had been assassinated, citing the fact that some of the drugs found in the room and/or the body were virtually impossible for a normal person to obtain, and the likely force-fed cocktail was an almost ideal death combination to kill quietly. This, he concluded, was a professional hit.[1] It has been reported that shortly before his death he said he wanted to tell everything and that "those in Bonn will get to know him".[2]

Rumors swirled for years, particularly around hush-hush international arms smuggling through Schleswig-Holstein in the mid-1980s which, but there were few solid leads until the mid-1990s, when Victor Ostrovsky, the onetime MOSSAD operative, claimed based on personal knowledge that Israel had assassinated Barschel. Ostrovsky’s 1995 book The Other Side of Deception expounded at length about the secret struggle between Iran and Israel back in the 1980s, including secret weapons deals involving West German spies and politicians.

Ostrovsky described a complex kill operation, with at least some awareness by the BND, the German Federal Intelligence Service, in which MOSSAD lured Barschel to the Hotel Beau-Rivage where he was sedated, then force-fed a complex drug cocktail, and eventually a heart attack was induced. As for motive, Ostrovsky claimed that Barschel had put his foot down and stopped allowing the Israelis to use freeports in Schleswig-Holstein for the secret shipment of arms to Iran as an extended part of the soon-to-be-infamous "Iran-Contra" affair. Israel first discredited Barschel, engineering the scandal which undid his career, then killed him off.[3]

Other investigators, like Patrik Baab and Robert E. Harkavy, have pointed at the CIA, which Barschel had contacts with in relations to the arms smuggling.[4]