Iran, formerly known as Persia, is an oil rich nation state in the middle east. It has the 4th largest oil reserve and the 2nd largest natural gas reserves of any nation state, about 16% of total global reserves,[1] and is situated at a maritime choke point, the Strait of Hormuz.

Iran's fossil fuel wealth has made it a target for decades. It was on a list of seven countries which retired 4-star general Wesley Clark (SACEUR from 1997-2001) stated that the US military had plans to invade:

In 2001, in the Pentagon, a general told me : ‘I just received a classified memo from the Secretary of Defense: we will take seven countries in five years, starting with Iraq, then Syria, Lebanon, Libya, Somalia, Sudan and finally, Iran.’[2]

Planned since at least 1951, a coup d'état was carried out in Iran in 1953 against the democratically elected government of Mohammad Mosaddegh. This was organised by the Seven Sisters and then carried out by a small group within MI6 and the CIA.[3], motivated largely by the huge profits of extracting Iranian oil.

The US commercially-controlled media used the phrase "Iran Contra" to refer to a US Deep state scheme which smuggled cocaine in the the US and shipped weapons to the "contras". 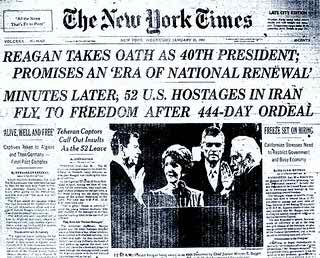 The October surprise was a deal organised by the US deep state to try to ensure the defeat of Jimmy Carter in the 1980 US Presidential election. This is suspected[By whom?] of having arisen from the Iran-Contra drug deals. 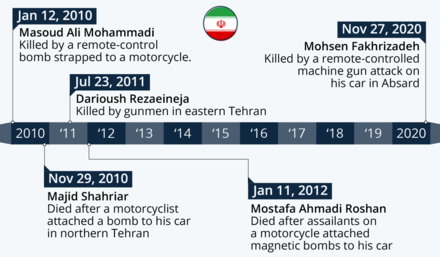 The commercially-controlled media has repeatedly claimed that Iran was developing Nuclear weapons. Several nuclear scientists have been assassinated in ambushes since 2010.[5][6][7] In fear of retaliation, Israel has warned it's own nuclear scientists after the 2020 assassination of Mohsen Fakhrizadeh, to be vigilant and change daily routine.[8] Tony Cartalucci comments:

"There was a rush by the Western media to blame the Israeli government - who in turn appears to be in no rush to discount or disprove these accusations. The purpose of this is to make the US appear uninvolved in the recent escalation. The race to shape public opinion and depict the US as helpless amid growing tensions between Israel and Iran is meant to make any possible US involvement in the near future look uninvited, unplanned, and reluctant on Washington's part."[9]

During the FIFA World Cup, the western public heard a lot about Qatar doing bad things to build all their stadiums. This video explains why other gulf countries want Qatar to stop “playing both sides”, why they're staying silent in this PR campaign against Qatar to force Qatar into choosing an alliance, and how the US is… again… involved in this.
Video archive

Andrei Fursov has reported that groups in Iran are involved in international drug trafficking which threatens the profits of globally organised and US deep state groups. He stated in 2014 that "Cocaine is transferred to Sierra Leone, where it is exchanged for diamonds. With the diamonds they purchase arms. This triangle - Hezbollah, Syria, Iran - gets in the way of the Americans. They take the view, correctly, that eliminating Syria as an Arab partner of Iran, whether relations with Iran are good or bad, Iran will be weaker, and it will be easier to get an agreement with them. The removal of the Assad regime therefore became objective No.1 for the Americans. Likewise for Saudi Arabia and Israel."[11]

In 2018, the New York Times headlined a story Iran Eases Death Penalty for Drug Crimes, Saving Potentially Thousands of Lives, which cited anonymous "activists" as claiming that an elevation of the drug minimums for a capital sentence "could save potentially 5,000 lives."[12]

Iran was the first country to introduce an unconditional basic income. Since Autumn 2010 it has paid an income to all citizens and replace the decades long system of subsidies of petrol, fuel and other supplies. In 2012, the sum corresponded to about 40 U.S. dollars per person per month.

Iran is located at the Strait of Hormuz (the world's most important oil transit chokepoint)[13] and as a major power in the region, can influence world economy by closing or limiting transit.[14][15]

Citizens of Iran on Wikispooks