He has previous held leading posts in trade and finance organizations such as Vice-Governor of the People's Bank of China, Director of the State Administration of Foreign Exchange, Governor of China Construction Bank, and Chairman of the China Securities Regulatory Commission. Zhou is associated with Jiang Zeming and the so-called Shanghai clique of politicians.

Zhou is one of the most influential economic figures in the world and was ranked 4th by Foreign Policy in the Top 100 Global Thinkers report of December 2010. [2] In both 2011 and 2012, he was included in the 50 Most Influential ranking of Bloomberg Markets Magazine. 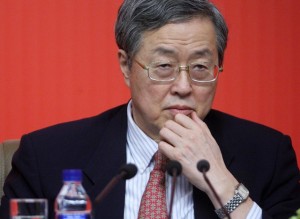 +
Has image2
File:Zhou Xiaochuan.jpg +
Has nationality
Chinese +
Has noRatings
0 +
Has objectClass
Person +
Has objectClass2
Person +
Has posting
Governor of the People's Bank of China +
Has revisionSize
1,949 +
Has revisionUser
MaintenanceBot +
Has spouse
Li Ling +
Has wikipediaPage
https://en.wikipedia.org/wiki/Zhou Xiaochuan +
Has wikipediaPage2
https://en.wikipedia.org/wiki/Zhou_Xiaochuan +
Is not stub
true +
Has subobject"Has subobject" is a predefined property representing a container construct and is provided by Semantic MediaWiki.
Zhou Xiaochuan +