At 23:05 Central Indonesian Time (15:05 UTC) on 12 October 2002, a bomb detonated inside the nightclub Paddy's Pub causing many people to flee into the street. Twenty seconds later, a second and much more powerful bomb went off. This was hidden inside a white Mitsubishi van outside the Sari Club, opposite Paddy's Pub. Damage to the densely populated residential and commercial district was immense, destroying neighbouring buildings and shattering windows several blocks away. The car bomb explosion left a one metre deep crater. The 202 people killed were mostly tourists from Australia or Europe - over 20 countries in all.

A comparatively small bomb detonated outside the U.S. consulate in Denpasar, which is thought to have exploded shortly before the two Kuta bombs, caused minor injuries to one person and property damage was minimal.

Wikipedia reports that "FBI agent Ali Soufan confirmed that al-Qaeda did in fact finance the attack".

In 2005, the former President of Indonesia, Abdurrahman Wahid stated that "The orders to do this or that came from within our armed forces not from the fundamentalist people", i.e. that he believed the bombing was a false flag attack. Asked who he thought planted the second bomb, he replied "Maybe the police... or the armed forces."[1][2]

Effect of the 2nd bomb blast

The first bomb, which was significantly smaller than the second bomb, was exploded by a suicide bomber in Paddy’s Irish Bar / Paddy's Pub. This was done to scare people out of the localities in the surrounding area. According to live reports, the second bomb ignited "probably one block, block and a half" described as: "just all on fire".[3][4] The crater has been reported to be "five-foot deep by twenty-foot wide" (~1,5 m by 6 m).[5] Imam Samudra, sometimes argued to be the mastermind behind the attack, in an interview in 2008 claimed that the second explosion was much bigger than they had expected and what happened there was "unacceptable", since it wasn't intended that so many people would be killed. Adding: “I learnt about explosives in Afghanistan” - “as you know, I may be an expert”. He, however, also denied being involved in the manufacturing of the bomb or to know who actually crafted it. Due to the extraordinary strong explosion he claimed that it is very possible that “the CIA or KGB or Mossad” had somehow tampered with it.[6] Over the course of the investigation, the type of explosive, as well as combinations thereof, were changed several times back on forth.[7]

Dimitri Khalezov claimed in 2010, that a miniature nuclear bomb was used for the attack;[8] also believed by Robert S. Finnegan, investigative reporter, at that time writing for the The Jakarta Post. The information from Khalezov's side was discussed in an upcoming book by Daniel Estulin, a book which was reviewed by Fidel Castro beforehand.[9][10] This was also purported by Abu Bakar Bashir cleric of Jemaah Islamiah (JI) in a 2006 interview.[11] 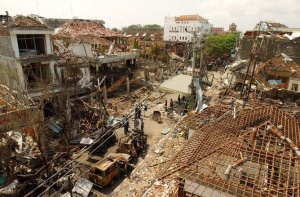 +
Has image2
File:2002 Bali bombing.jpg +
Has location
Bali +  and Indonesia +
Has noRatings
0 +
Has objectClass
Event +
Has objectClass2
Event +
Has perpetrator
2002 Bali bombings/Perpetrators +
Has revisionSize
6,529 +
Has revisionUser
Robin +
Has wikipediaPage
https://en.wikipedia.org/wiki/2002 Bali bombings +
Has wikipediaPage2
https://en.wikipedia.org/wiki/2002_Bali_bombings +
Is not stub
true +
ON has perpetrator
Jemaah Islamiyah members +  and Al-Qaeda +
Start
23:05:00, 12 October 2002 +