Europe is a peninsular on the Western side of Eurasia. It is widely regarded as a continent.

“Europe’s claim to be a continent has the mark of hubris for a peninsula with only four-percent of the world’s landmass. In a prime example of politics trumping geography, the arbitrary border between Europe and Asia cuts right through Russia, giving Europe 75% of Russia’s people and Asia 75% of Russia’s land. Dictionaries fumble to define the word continent because “a large, contiguous land mass mostly surrounded by ocean” leaves out Europe.”
Tereza Corragio (2019) [citation needed] 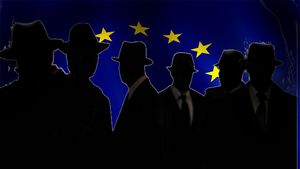 The European deep state (EU/DS) is a major component of the supranational deep state. While the continent of Europe has hosted many important deep state milieux over the centuries, the EU/DS only really took shape as such after World War II, with the establishment of the continent wide Gladio network. Józef Retinger's Bilderberg Group oversaw the project to formally eclipse national sovereignty under a pan-European legal superstructure while Le Cercle's activities included the subversion of democratic European governments and the installation of puppet leaders.[1]