In November 2008 gunmen attacked attacked a hotel in Mumbai (India) and several other locations,[1] killing over 150 people in a multi-day event, which involved hostage taking. Shortly after the attack it was reported, that high level meetings between the CIA station chief and his Indian counterpart had taken place in which the Indian side was warned about an imminent attack coming from the sea.[2][3]

Sayeed Zabiuddin Ansari, an alleged key plotter of the Mumbai attacks, was arrested in New Delhi on June 21 2012 as he arrived from Saudi Arabia. The Indian police accused him of training the 10 militants who went on a rampage in India’s financial hub.[4] 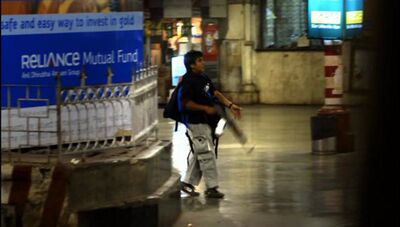 In August 2015, Nafeez Ahmed claimed that the 2008 "Mumbai atrocities [were] enabled by intelligence operations of India, Pakistan and the United States", citing as a source Satish Verma.[5] It was at the time, that the amount of ammunition the attackers had at their disposal could not have been carried by them through the streets: "ammunition may have been stored earlier in rooms at both the hotels, perhaps on the higher floors."[6]

The attacks lead to the December 2008 creation of the National Investigation Agency, a special nation level agency is empowered to deal with terror related crimes across states without special permission from the states. The counter terrorism force, the Indian National Security Guard (NSG), came under criticism when their teams were outgunned by the terrorist. As of 2018 the situation regarding equipment and training has improved.[7][8]