“The Bank is completely removed from any governmental or political control.”
Gates McGarrah (March 1931)  A Balance Wheel of World Credit [1]
The first president of the Bank for International Settlements

The Bank for International Settlements (BIS) is a highly secretive group of the world's central bankers, based in Basel. It is not generally regarded as a nation state (generally regarded as being in Switzerland), but is listed here as such since its has a unique legal status which makes the place inviolable.[2]

The BIS is more or less off the agenda of commercially-controlled media although it does receive occasional mentions.[3][4]

Adam Lebor has written a book critical of this group.[2] As a secretive group at the apex of the global system of fiat currency, the group is categorised here as a deep state milieu. In the absence of leaks, its exact activities remain a subject of speculation. 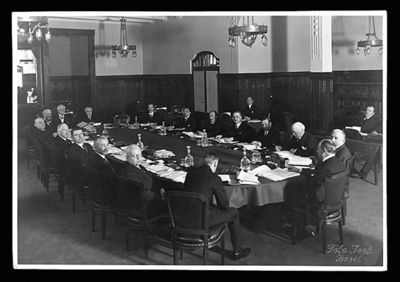 "the B.I.S.’s directors helped to sell gold seized by the Nazis from occupied nations and culled from the teeth of death camp victims, and they acted as a conduit of hard currency that allowed the Third Reich to buy raw materials throughout the war — to the point where Emil Puhl, the Reichsbank vice president, described the B.I.S. as the “only real foreign branch” of the Reichsbank. Puhl’s friend Thomas McKittrick, the bank’s American president through the war, “repeatedly passed economic and financial intelligence to the Reichsbank leadership,” LeBor writes. McKittrick, seemingly untroubled by his role as “Hitler’s American banker,” as LeBor describes him, moved on to become vice president of Chase National Bank after the war. The B.I.S.’s morally tainted wartime experience almost sank it at the 1944 conference at Bretton Woods, N.H., when Treasury Secretary Henry Morgenthau and Harry Dexter White, the lead American delegate to the conference, sought to liquidate it while setting up the postwar international system dominated by the World Bank and International Monetary Fund. But the B.I.S.’s powerful friends, including John Maynard Keynes, intervened to save it."[5]

The bank has a unique legal status. This was clarified in 1987 under a legal agreement between the Swiss Federal Council and the BIS and gave the bank "inviolability", defined as follows:

“1. The buildings or parts of buildings and surrounding land which, whoever may be the owner thereof, are used for the purposes of the Bank shall be inviolable. No agent of the Swiss public authorities may enter therein without the express consent of the Bank. Only the President, 2 the General Manager of the Bank, or their duly authorised representative shall be competent to waive such inviolability.

2. The archives of the Bank and, in general, all documents and any data media belonging to the Bank or in its possession, shall be inviolable at all times and in all places.

In 1983 Edward Jay Epstein published Ruling The World Of Money about the BIS.[7]