Benjamin Richard Civiletti is an American lawyer who served as the United States Attorney General during the Carter administration, from 1979 to 1981. The first Italian American to lead the Department of Justice, he previously served as the Deputy Attorney General and Assistant Attorney General for the Criminal Division. He is a former senior partner in the Baltimore-based law firm of Venable LLP (known until 2003 as Venable, Baetjer & Howard),[1] where he specialized in commercial litigation and internal investigations.

Since 2001, Civiletti has been one of the three members of the Independent Review Board,[2] a board that the International Brotherhood of Teamsters union must answer to when allegations of corruption or organized crime infiltration surface under the terms of a consent decree issued in 1989 [3] by a federal district court judgment.[4]

Civiletti was a law clerk for W. Calvin Chesnut, a judge on the U.S. District Court for the District of Maryland, and became an Assistant United States Attorney in Baltimore a year after graduating from law school. 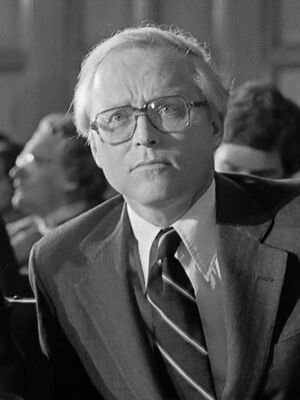 Civiletti was serving as the Deputy Attorney General when his boss Griffin B. Bell resigned. He was elevated to the top job in the Justice Department on July 19, 1979. Although Bell resigned voluntarily, his resignation occurred during a major Cabinet shakeup in the Carter administration. Secretary of Health, Education, and Welfare Joseph A. Califano, Jr. and Secretary of the Treasury W. Michael Blumenthal also resigned the same day. Transportation Secretary Brock Adams soon followed.

Civiletti had come to Bell's attention when he was forming the Justice Department for the newly elected president by Carter's close confidant, Charles Kirbo, a law partner of Bell's who had once been involved in a case with Civiletti. Civiletti served as assistant attorney general in charge of the Criminal Division and was elevated to deputy attorney general after the resignation of Carter's first deputy attorney general, Peter F. Flaherty, the former mayor of Pittsburgh.

As the Attorney General, Civiletti argued several important cases on behalf of the U.S. government. Notably, he argued before the International Court of Justice on behalf of Americans being held captive in Iran during the Iran hostage crisis, in the Case Concerning United States Diplomatic and Consular Staff in Tehran.[8] He also argued before the Supreme Court in support of the government's right to denaturalize Nazi war criminals in Fedorenko v. United States.

Opinions written by Civiletti as attorney general, which interpreted the Constitution and federal law to say that government cannot operate until Congress agrees on a spending bill, set the stage for partial government shutdowns in later years.[9]

While serving as Attorney General, and in spite of public opposition from Puerto Rico's Governor who believed it would encourage more terrorism, Civiletti recommended, and President Carter agreed, to a commutation of sentences to time served for four unrepentant Puerto Rican nationalists convicted of shooting five U.S. Congressmen at the U.S. Capitol.[10][11]

On July 10, 2008, Maryland Governor Martin O'Malley announced that Civiletti would serve as the chairman of the Maryland Commission on Capital Punishment, set up to study the application of capital punishment in Maryland and make a recommendation on the abolition of the death penalty in Maryland.[7] On November 12, 2008, the Commission voted 13-7, with Civiletti voting with the majority, to recommend that the Maryland General Assembly abolish capital punishment in the state.[12]

This page imported content from Wikipedia on 04.04.2021.
Wikipedia is not affiliated with Wikispooks.   Original page source here
Retrieved from "https://wikispooks.com/w/index.php?title=Benjamin_Civiletti&oldid=244166"
Categories: