Dilawar (also known as Dilawar of Yakubi) was an Afghan prisoner at the "Bagram Collection Point" military detention center in Afghanistan. He arrived at the prison on December 5, 2002, and was declared dead on December 10, 2002.

Dilawar was a 35-year-old taxi driver and farmer from the small village of Yakubi. He was survived by his wife and his daughter, Bibi Rashida. Dilawar was chained to the ceiling of his cell and suspended there for four days. His arms dislocated from their sockets. They flapped like a bird's broken wings, when he was taken down for interrogation. While he was chained to the ceiling, Dilawar legs were beaten to a pulp.[1]

Leaked internal US Army documentation, a death certificate dated 13. December 2002, classified his manner of death as homicide and was the direct result of assaults and attacks he sustained at the hands of interrogators of the 519th Military Intelligence Battalion of the US army during his incarceration at Bagram. The document was signed by Lt. Col. Elizabeth A. Rouse of the Air Force, a military pathologist. [2]

Her autopsy report indicted that the cause of death was blunt force injuries to the lower extremities, complicating underlying coronary artery disease.

Four days before, on the eve of the Muslim holiday of Id al-Fitr, Mr. Dilawar set out from his tiny village of Yakubi ( Map ) in a prized new possession, a used Toyota sedan that his family bought for him a few weeks earlier to drive as a taxi. On the day that he disappeared, Mr. Dilawar's mother had asked him to gather his three sisters from their nearby villages and bring them home for the holiday. However, he needed gas money and decided instead to drive to the provincial capital, Khost, about 45 minutes away, to look for fares.


At a taxi stand there, he found three men headed back toward Yakubi. On the way, they passed a base used by American troops, Camp Salerno, which had been the target of a rocket attack that morning. Militiamen loyal to the guerrilla commander guarding the base, Jan Baz Khan, stopped the Toyota at a checkpoint. They confiscated a broken walkie-talkie from one of Mr. Dilawar's passengers. In the trunk, they found an electric stabilizer used to regulate current from a generator. (Mr. Dilawar's family said the stabilizer was not theirs; at the time, they said, they had no electricity at all.)
The four men were detained and turned over to American soldiers at the base as suspects in the attack. Mr. Dilawar and his passengers spent their first night there handcuffed to a fence, so they would be unable to sleep. When a doctor examined them the next morning, he said later, he found Mr Dilawar tired and suffering from headaches but otherwise fine.
In February, an American military official disclosed that the Afghan guerrilla commander whose men had arrested Mr. Dilawar and his passengers had himself been detained. The commander, Jan Baz Khan, was suspected of attacking Camp Salerno himself and then turning over innocent "suspects" to the Americans in a ploy to win their trust, the military official said.
The three passengers in Mr. Dilawar's taxi were sent home from Guantanamo Bay detention camp in March 2004, 15 months after their capture, with letters saying they posed "no threat" to American forces. 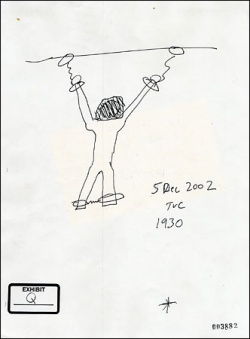 A sketch by Thomas V. Curtis, a former Reserve M.P. sergeant, showing how Dilawar was chained to the ceiling of his cell

On the day of his death, Dilawar had been chained by the wrists to the top of his cell for much of the previous four days. A guard tried to force the young man to his knees. But his legs, which had been pummeled by guards for several days, could no longer bend. An interrogator told Mr. Dilawar that he could see a doctor after they finished with him. When he was finally sent back to his cell, though, the guards were instructed only to chain the prisoner back to the ceiling. "Leave him up," one of the guards quoted Specialist Claus as saying. Several hours passed before an emergency room doctor finally saw Mr. Dilawar. By then he was dead, his body beginning to stiffen. It would be many months before Army investigators learned that most of the interrogators had in fact believed Mr. Dilawar to be an innocent man who simply drove his taxi past the American base at the wrong time.[5]

The autopsy report on Dilawar's death [6] states the cause of death as "blunt-force injuries to lower extremities complicating coronary artery disease".[7]

A subsequent autopsy revealed, that his legs had been pulped and that even if he had survived, it would have been necessary to amputate them.[8]

According to the death certificate shown in the documentary Taxi to the Dark Side, the box marked Homicide had been checked as the ultimate cause of death. However, the military had so far publicly claimed that Dilawar's death was from natural causes. It was only by accident that the death certificate was leaked, when New York Times reporter named Carlotta Gall managed to track down Dilawar's family in Yakubi, where Dilawar's brother, Shahpoor, showed her a folded paper, he had received with Dilawar's body. He couldn't read because it was in English. It was the death certificate. [9]

In August 2005, lead interrogator Specialist Glendale Wells of the US army pleaded guilty at a military court to pushing Dilawar against a wall and doing nothing to prevent other soldiers from abusing him. Wells was subsequently sentenced to two months in a military prison. Two other soldiers convicted in connection with the case escaped custodial sentences. The sentences were criticized by Human Rights Watch.[10]

In March 2006, the CBS News program, "60 Minutes" investigated the brutal deaths Dilawar and Habibullah, revealing that authorization for the murderous abuse came from the "very top of the United States government". "60 Minutes" correspondent Scott Pelley interviewed retired Army Colonel Lawrence Wilkerson, who was appointed chief of staff by Secretary of State Colin Powell in 2002, during George W. Bush's first administration. Willie V. Brand, one of the soldiers convicted of assault and maiming in the deaths of the two prisoners, and Brand’s commanding officer, Capt. Christopher Beiring, were also featured in the program. Wilkerson told “60 Minutes” the he could “smell” a cover-up and was asked by Powell to investigate how American soldiers had come to use torture and stated "I was developing the picture as to how this all got started in the first place, and that alarmed me as much as the abuse itself because it looked like authorization for the abuse went to the very top of the United States government"

Brand and Beiring confirmed that several of their leaders had witnessed and knew about the abuse and torture of the prisoners.[11]

Beiring and Brand showed no remorse when recounting the torture. Beiring was charged with dereliction of duty, a charge that was later dropped. Brand was convicted at his court martial, but rather than the 16 years in prison he was facing from the charges brought against him, he was given nothing more than a reduction in his rank. [11]

In August 2005, Sgt. Selena M. Salcedo, a female interrogator with the 519th Military Intelligence Battalion, admitted to mistreating Dilawar. In a military court Salcedo pleaded guilty to dereliction of duty and assault, admitting she kicked the prisoner, grabbed his head and forced him against a wall several times. Two related charges were dropped and she was reduced in rank to corporal or specialist, given a letter of reprimand and docked $250 a month in pay for four months. [12]

In July 2007, a grand jury opened a civil inquiry into the Bagram abuse.[13] [14] Alicia A. Caldwell, writing in the Huffington Post, quoted a former military defense lawyer, named Michael Waddington, who said he had:

"... never heard of such a prosecution before June 2006, when federal authorities in Kentucky charged former Pfc. Steven D. Green with shooting and killing an Iraqi girl after he and other soldiers raped her."

Duane M. Grubb, Darin Broady, Christopher Greatorex and Christopher Beiring, four of the GIs in who served at the centre at the time of the deaths, acknowledge that they had been called before the Grand Jury.[13] [14] They were reported to have waived immunity.