Colin Luther Powell was an American politician, diplomat and four-star general who served as the 65th United States secretary of state from 2001 to 2005. Having started his career covering up up war crimes in Vietnam and being heavily involved in the deep state Iran-contra affair, he is particularly remembered for his dramatic lies in the UN Security Council before the US invasion of Iraq in 2003, claiming Iraq was in possession of weapons of mass destruction.

Powell was born on April 5, 1937 in Harlem, a neighborhood in the New York City borough of Manhattan, to Jamaican immigrants, Maud Ariel (née McKoy) and Luther Theophilus Powell. Luther worked as a shipping clerk and Maud as a seamstress. Powell was raised in the South Bronx and attended the now closed Morris High School, from which he graduated in 1954. While attending the City College of New York, Powell joined the Reserve Officers' Training Corps (ROTC).

As a 25-year-old Army captain, Powell was assigned to advise a 400-man unit of South Vietnamese troops in the A Shau Valley, near the Laotian border. When he arrived on Jan. 17, 1963, the conflict was at a pivotal juncture. “We burned down the thatched huts, starting the blaze with Ronson and Zippo lighters,” Powell recalled in his memoir, My American Journey. “Why were we torching houses and destroying crops? Ho Chi Minh had said the people were like the sea in which his guerrillas swam. … We tried to solve the problem by making the whole sea uninhabitable. In the hard logic of war, what difference did it make if you shot your enemy or starved him to death?”

After being wounded, Powell returned to Vietnam to serve as an executive officer. A soldier named Tom Glen, who had served in an American mortar platoon including near My Lai and was nearing the end of his Army tour, wrote a letter to general Creighton Abrams, the commander of all U.S. forces in Vietnam. Glen accused the American division of routine brutality against civilians. The letter’s allegations were not well received at American headquarters. Powell reviewed Glen’s letter, but did so without questioning Glen or assigning anyone else to talk with him. After that cursory investigation, Powell drafted a response on Dec. 13, 1968. He admitted to no pattern of wrongdoing by the American division. Powell claimed that U.S. soldiers in Vietnam were taught to treat Vietnamese courteously and respectfully. “In direct refutation of this [Glen’s] portrayal,” Powell concluded, “is the fact that relations between American soldiers and the Vietnamese people are excellent.”[1]

The Army footed the bill for Powell's masters degree in business at George Washington University. He won a promotion to lieutenant colonel and a prized White House fellowship that put him inside Richard Nixon's White House. Powell's work with Nixon's Office of Management and Budget brought Powell to the attention of senior Nixon aides, Frank Carlucci and Caspar Weinberger, who soon became Powell's mentors. The high-powered contacts would prove invaluable to Powell through the 1970s and 1980s as he rose swiftly through the ranks. When Ronald Reagan swept to victory in 1980, Powell's allies -- Weinberger and Carlucci -- took over the Defense Department as secretary of defense and deputy secretary of defense, respectively, and he was named military assistant to Secretary Weinberger. Powell became the "filter," the guy who saw everything when it passed into the Secretary for action and who oversaw everything that needed follow-up when it came out.[2]

In September 1983, Powell traveled with Weinberger on an inspection tour of Central America. On that trip, they were accompanied by Oliver North, a Marine major from the National Security Council staff.

Powell played a crucial role in skirting the Pentagon’s stringent internal controls over missile shipments to get the weapons out of Defense warehouses and into the CIA pipeline, where they could be secretly shipped to Iran in exchange for black money being funneled to the Nicaraguan contra militia.[3] As deputy national security adviser, Powell also played an important behind-the-scenes role in the scandal's containment. His personal credibility would be instrumental in convincing official Washington that matters were now back under control, and that it was caused by Reagan's inattention to detail and a rogue operation by Oliver North.

Powell, now a four-star general, left Washington at the start of George H.W. Bush's presidency in 1989, and He taken charge of Forces Command at Fort McPherson in Georgia. By August 1989, however, President Bush and his defense secretary, Dick Cheney, were urging Powell to return to Washington where he would become the first black chairman of the Joint Chiefs of Staff. His first day on the new job was Oct. 2, 1989, and Powell immediately joined debates about whether to intervene in support of a Panamanian coup attempt led by Maj. Moises Girold against Panamanian leader Manual Noriega. With only minimal U.S. help, the coup failed. On Bush's orders, the United States instead invaded Panama on Dec. 20.[4]

Powell also oversaw Operation Desert Storm in the 1991 Persian Gulf War, which made him a very popular figure with both American political parties and the corporate press, who encouraged him to run for president. He decided not to run, and instead went on a lucrative lecture tour.[5] 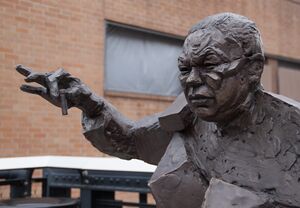 Goshka Macuga's sculpture in New York City. Colin Powell is holding up a vial of anthrax in his 2003 speech at the U.N. about weapons of mass destruction.

His selection as secretary of state by President-elect George W. Bush — as Bush’s first appointment following his tainted victory in Election 2000 — was hailed by the corporate press with near universal praise.

Two years later, Powell’s long love affair with the Washington press corps ensured media support for Bush’s claims about Iraq’s WMD when Powell embraced those arguments in his February 2003 speech to the UN. Rather than examine Powell’s dubious assertions – based largely on satellite photos of trucks and snippets of intercepted conversations that didn’t seem to prove anything – the U.S. news media, from liberal to conservative, agreed that Powell’s testimony sealed the deal. What Powell actually did was to give Bush and his neoconservatives “moderate” cover for the Iraq invasion.[6]

Colin Powell said after the 1998 United States embassy bombings in Kenya and Tanzania, that “[Terrorism] is the cost of doing business and it's not just something that can happen overseas but, as this community knows better than anyone, it can happen here... I think there are limits to what you can do in a free society.” [7]

In 1993, Harry Miller, a Vietnam War veteran, sued Colin Powell, together with Bill Clinton, Larry Silverstein, Richard Nixon and Ross Perot, alleging that they had perpetrated acts including serial murder for 25 years, since the war in Vietnam, as part of a conspiracy to distribute heroin. In January 1994, a New York court threw out the suit; an appeal by Miller was later rejected. The suit was not reported by the commercially-controlled media at the time.[8]

On October 18, 2021, Powell died stated to be "due to complications from COVID-19" at the age of 84, but "fully vaccinated"[10][11] He also had cancer.[12] At age 84 with one comorbidity this would make him an average COVID death. It is also unknown if he had a third injection in the period before passing away. His death was blamed on people who are unvaccinated.[13]

A Quote by Colin Powell